AWPA condemns the silence from Canberra on situation in West Papua

As the situation in West Papua deteriorates further, Canberra remains silent on the issue.

Latest reports indicate that at least 20 people were killed on Monday, including three shot by police after protests by hundreds of people in Wamena. Approximately 65 people were also injured in the protests. The protests occurred because of a report that a teacher insulted a Papuan student (the police claimed it was a false rumor).  As a result of the protests, local government buildings, shops, homes, cars and motorbikes were set on fire on roads in Wamena city.

In another protest in Jayapura at least one soldier and three civilians died and over 300 people arrested  and taken to the Police headquarters for questioning.

Joe Collins of AWPA said “ we have not heard a word from Canberra on the situation in West Papua”.   Yet in an ABC News report on the abuses against the Yghur people she said,

Joe Collins said, “ why is she not raising concerns on the situation in West Papua?

In a media release the Foreign Minister said she would be attending the 74th session of the United Nations General Assembly in New York from 22 September.

Joe Collins said “this would have been an opportunity for Australia to show its commitment and concern for human rights in our region by a making a strong statement of concern on the issue of West Papua, as did Vanuatu and the Solomon Islands”. "Australia could have at least encouraged Indonesia to allow the UN High Commissioner for Human Rights Michelle Bachelet to visit the territory”.
Ends. 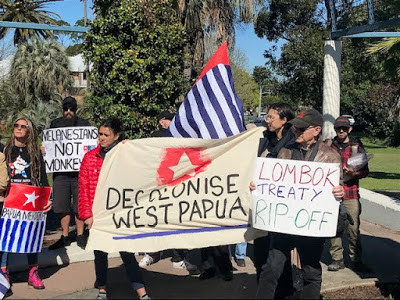