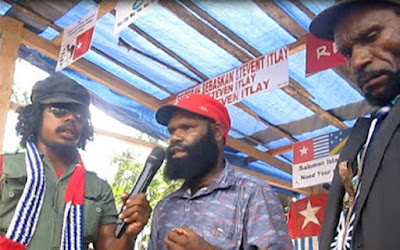 Wilpret Siagian, Jayapura – West Papua National Committee (KNPB) Chairperson Agus Kossay was arrested by a joint team from the Papua regional police on Tuesday September 17. Kossay has been declared a suspect for allegedly being the mastermind behind the riots in Jayapura on August 29.

The Papua regional police had earlier included Kossay in a wanted persons list. “He was arrested in the Hawaii area, Sentani, on Tuesday September 17 at around 6 pm by a joint team”, said Papua regional police chief Inspector General Rudolf A. Rodja at the Papua regional police headquarters on Wednesday September 18.
According to Rodja, Kossay was arrested as he was passing through Jl Raya Sentani-Abepura in Jayapura on a motorcycle driven by a colleague, Dony Itlay. “They were also riding a stolen motorcycle”, said Rodja.
The joint team also arrested Itlay who is a KNPB member and was the person driving the motorcycle Kossay was on. “Dony Itlay is also a KNPB member. He was involved in the actions which took place in Jayapura”, said Rodja.
According to Rodja, the police’s investigations into the Jayapura riots will continue despite Kossay’s arrest. “We will continue to look for and develop the investigation into perpetrators of the riots in Papua and who must be held responsible for causing them, no matter who they are”, he said.
Indonesian police chief General Tito Karnavian earlier said that there were a number of organisations that were behind the riots in Papua and West Papua provinces. Two of them are the United Liberation Movement for West Papua (ULMWP) and the KNPB.
“The ULMWP and KNPB are responsible for the incidents. They were the ones that produced the hoaxes”, said Karnavian when he visited Jayapura recently. (aan/aan)
[Translated by James Balowski. The original title of the article was “Ketua KNPB Ditangkap Terkait Kerusuhan di Jayapura”.]
Source: https://news.detik.com/berita/d-4710676/ketua-knpb-ditangkap-terkait-kerusuhan-di-jayapura
---------------------------
HTTPS://EN.ANTARANEWS.COM/NEWS/133028/PAPUA-AN-INSEPARABLE-PART-OF-INDONESIA-DEFENSE-MINISTER
2) PAPUA AN INSEPARABLE PART OF INDONESIA: DEFENSE MINISTER
4 hours ago
JAYAPURA (ANTARA) - PAPUA IS AN INSEPARABLE PART OF THE UNITARY STATE OF THE REPUBLIC OF INDONESIA (NKRI), DEFENSE MINISTER RYAMIZARD RYACUDU EMPHASIZED WEDNESDAY. "PAPUA IS AN IMPORTANT PART THAT IS INSEPARABLE FROM THE UNITARY STATE OF THE REPUBLIC OF INDONESIA," RYACUDU SAID WHILE MAKING HIS REMARKS IN BABRONGKO UMANDROW VILLAGE, JAYAPURA DISTRICT, PAPUA.
Defending a country is required by every religion, according to him.
"Any religion will forbid establishing a state within a state," Ryamizard stressed.
The minister also reminded that Papua was a legitimate part of the NKRI.
"This is our common duty. As ambassadors of the defense of the country, you are responsible for maintaining the integrity of the NKRI forever. The Unitary State of the Republic of Indonesia (NKRI) and Pancasila are the final price," the minister remarked.
Pancasila (the Five Principles, the Indonesian State Ideology) becomes a glue of the Indonesian people from Sabang to Papua, from Rote Island to Miangas Island, the minister said.
Pancasila was Indonesia itself, replacing Pancasila means replacing Indonesia, Ryamizard reiterated.
"Pancasila will rise and sink with this country. The destruction of Pancasila is the destruction of the state," he said.
Therefore, it has become an agreement and a joint task to always maintain and preserve Pancasila as a national identity that must always be reflected in the life of the nation and state.
"Pancasila is a state ideology that is final and must not be negotiable. We must all be proud of Pancasila," the Minister of Defense said.
Pancasila has united thousands of differences ranging from ethnicity, culture, race and religion.
"This is a miraculous and great ideology. Because of that, there is no reason for all of us not to protect Pancasila," Ryacudu asserted. (INE)
Related news: PNG consistently supports Indonesia's sovereignty over Papua: MPRelated news: Extra care for Papua brethren crucial to maintaining Indonesia's unity
EDITED BY INE


Surabaya, E Java (ANTARA) - East Java Police will put human rights lawyer-cum-activist Veronika Koman on its most-wanted list (DPO) since she was named a suspect for tweeting a hate speech and spreading false information (hoax).
"Today, the National Police at its headquarters in Jakarta conducted a preliminary examination on Veronika Koman," East Java Police Chief Inspector General Luki Hermawan said in Surabaya, East Java Province Wednesday. If Koman failed to make an appearance at the police headquarters latest September 18, the police would put her name on its most-wanted list.
Once Koman's name is on that list, the police may contact Interpol to issue a red corner notice. That would notify law enforcement in at least 190 Interpol member countries of Koman's status as a suspect of the Indonesian Police.
Related news: Indonesia pushes for Interpol red alert against KomanRelated news: UN experts perceive Veronika Koman's statement as one-sided: official
Koman was named as a suspect because she allegedly had incited unrest by tweeting a hate speech and false information on a racial abuse suffered by a group of Papuan students in Surabaya, August 17, 2019.
Koman had failed to show up at the police headquarters for questioning September 13, according to the police. Thereafter, the police granted her five more days as she had left for Australia on work. However, Koman had not yet returned to Indonesia.
Indonesia's National Commission of Human Rights and several human rights groups such as Amnesty International had slammed the police move to name Koman as a suspect. For the human rights advocate body, Koman's tweets did not contain either fake news or a hate speech but only had the more necessary information from a different point of view.
Up until today, Koman continued to tweet reports and pictures of the situation in Papua and West Papua provinces.
Related news: Rights activists in Papua urge govt to offer comprehensive solutionRelated news: Komnas HAM urges Jokowi to hold dialog in Papua
------------------------------------
FOREST NEWS 18 SEP 2019 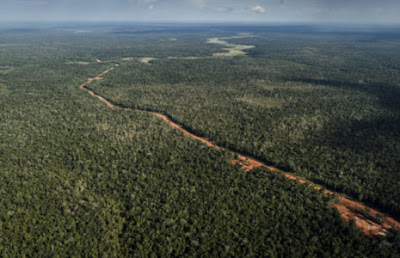 Indonesia - The Papua region, which makes up the Indonesian half of the island of New Guinea, has often been
seen as a ‘last frontier’. Rugged, wild and resource-rich, the island holds one of the world’s largest and most intact
tropical rainforests, which is a ‘hot-spot’ for a wide range of unique and threatened flora and fauna. Its
indigenous communities are famously diverse, too, with over 800 languages spoken and a number of cultures that
are still relatively
untouched by globalization.
Compared to the rest of Indonesia, the Papua region has little infrastructure and high levels of poverty: currently,
53 percent of the population don’t have access to electricity, and over a quarter of residents live below the poverty
line – more than twice the national average of 10.7 percent.
But thanks to recent government efforts to accelerate infrastructure development and boost connectivity in the
region, Papua is poised on the brink of some pretty major developments, which could change its long-held
reputation for remoteness and inaccessibility – and which may have major impacts for its communities
and ecosystems………………………...
https://forestsnews.cifor.org/62074/the-papua-atlas-new-tool-tracks-development-on-remote-island-as-it-happens?fnl=en