1) Inside an Indonesian Propaganda Network 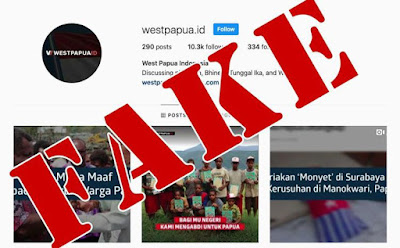 In the wake of a Daily Post investigation into what appeared to be a deliberate attempt to spread fake news targeted at the government of Vanuatu and other supporters of West Papuan independence movement, a BBC investigative journalist has found clear evidenceof a concerted campaign to pollute discussions relating to West Papua.
The in-depth report was published on the Bellingcat website. Bellingcat is a ground-breaking investigative website that uses digital sleuthing tools to uncover major stories. It helped to identify the killers in the assassination of Russian dissident Sergei Skripal, and provided definitive evidence that Russia was supplying a mercenary army to prop up the Syrian government war effort. It also provided critical data suggesting that Russian-backed forces were responsible for downing Malaysian Airlines flight 17, which was hit by an anti-aircraft missile while flying over Ukrainian airspace.
Now, the website has turned its attention to the West Papua conflict and some of the many ways Indonesia is trying to drown out dissent and confuse people sympathetic to the cause of West Papuan freedom.
Using open source investigative tools, BBC journalist Benjamin Strick has uncovered clear evidence pointing to a bot network operating on Twitter, and joined to Instagram and Facebook accounts providing pro-government propaganda.
The logo for one of these accounts bears a striking resemblance to one used on other pages identified in an earlier Daily Post investigation into fake news pages that had been using plagiarised and faked content to undermine the government of Vanuatu.
Facebook quietly took the original pages down after concerns were raised by the Daily Post and others. Within days, however, the same content had reappeared in other pages, one of which featured an almost identical logo.
By using Facebook’s ‘boost’ option, which spreads a message in exchange for payment, the fake news posts were able to reach engagement levels rivalling some of this newspaper’s top stories.
The Bellingcat investigation uncovered a web of interconnected ‘bot’ accounts, which were used to promote pro-government information in online discussions of the ongoing political struggle.
“While there has been targeted internet disruption in Papua and Indonesia,” Strick writes, “and the banning of counter narrative YouTube content, something that has not been exposed, until now, is an active bot network disseminating pro-government content through major social media platforms.
The campaign, fuelled by a network of bot accounts on Twitter, expands to Instagram, Facebook and YouTube. The content is spread in Tweets using specific hashtags such as #FreeWestPapua, #WestPapuaGenocide, #WestPapua and #fwpc.”
He goes on to outline how he used open source intelligence gathering software to analyse the content of tweets using these hashtags, and determined that the behaviour of dozens of accounts was consistent with the kind of propaganda operation made famous in the Cambridge Analytica scandal.
The findings are consistent with behaviour observed by the Daily Post and others. If it is in fact determined that state actors are behind these accounts, it would raise important questions concerning our national sovereignty and what appears to be an effort to quash the demand for independence within West Papua and online as well.
-------------------------------
https://www.thejakartapost.com/academia/2019/09/11/listen-to-papuans-first.html

11 September 2019 15:12 WIB
TEMPO.CO, Jakarta - Public Works and Public Housing Minister Basuki Hadimuljono said his office will establish a design contest of Presidential Palace in Papua. The design is planned to meet for completion this year.
“But, I think [the design] should not be drafted as a presidential palace, but a statehouse. So it will be the President’s office there,” said Basuki in Jakarta International Expo, Kemayoran, Jakarta, Wednesday, September 11.
Basuki said the ministry will survey the location first before running the contest as he was informed that 10 hectares of land is ready for the construction project.
“I have just ordered by him (the President) through Pak State Secretary (Pratikno). We will inspect the location as 10-hectare land in Jayapura is available for the project,” he added. “So we will check it first and then hold the contest. Hopefully, the design will be completed this year.”
The minister also hoped the project could be started next year.
Previously, President Joko "Jokowi" Widodo announced that he will build a state palace in the Indonesia's eastern province in 2020 as requested by Papuan figures during a meeting in Merdeka Palace, Jakarta, Tuesday, September 10. One of the figures, Abisai Rolio said he would grant his 10-hectare land for the project.
CAESAR AKBAR l AHMAD FAIZ
—————————
https://www.rnz.co.nz/international/pacific-news/398556/leading-west-papuan-independence-activist-arrested-in-jayapura
6) Leading West Papuan independence activist arrested in Jayapura
A leading West Papuan independence activist has been arrested by Indonesian police in Jayapua.
Buchtar Tabuni is a member of the executive committee of the United Liberation Movement for West Papua.
Suara Papua reported that police suspected Mr Tabuni was an instigator of recent riots related to large anti-racism and pro-independence protests in recent weeks.
The arrest of Mr Tabuni by Brimob paramilitary police is the latest of dozens of arrests in Papua in a security forces crackdown after the widespread protests in the region.
The news site also reported that another leading Papuan independence activist, Agus Kossay, the chairman of the West Papua National Committee, had gone missing since last week.
At least 10 people have died in unrest related to the protests - the Liberation Movement puts the figure at 12, claiming security forces caused eleven of the deaths.
Meanwhile, the Liberation Movement has released a report on West Papuan actions against racism between 19 and 29 August 2019.
It said that in total, over 223,000 people took part in mass demonstrations, which were sparked by harassment of Papuan students in Javanese cities mid-last month.
Over 218,000 of the demonstrators were in Papuan cities and towns, but mass mobilisations also occurred in other parts of Indonesia, and a smaller number in other countries too.
Police in Papua have told Reuters that they blamed the Liberation Movement's UK-based chairman, Benny Wenda, for stirring the protests.
Police also said they have arrested 85 suspects since unrest erupted in mid-August.
According to the Liberation Movement report, around 82 people remain in detention in Papua, or other parts of Indonesia, for their participation in the mobilisations.
The pro-independence organisation says Indonesia's efforts to carry out a criminal process against various parties involved in demonstrations will not solve the problem of Papua.
It said it invites Indonesia to solve the Papua problem through political steps.
--------------

Posted by AWPA Sydney News at 2:00 AM