Jayapura, Papua, (ANTARA News) - The bodies of two police officers Zulkifli and Prayoga shot dead by suspected separatists are in the process of evacuation to Jayapura, Papua, on Tuesday.

The body of the Zulkifly was in the process of evacuation from Wamena and that of Prayoga from Tiom to Wamena and from Wamena to the provincial city, Deputy chief of the Papua police Brig. Gen. Paulus Waterpaw said on Tuesday.

Evacuation of the two bodies to Jayapura could not be made at once as the body of Prayoga was found only on Monday afternoon that it could not be carried to Wamena at once, Waterpaw said.

"Hopefully the process of evacuation could be carried out without incident," he said.

The two were killed in an ambush in the regency of Lanny Jaya at Jalan Pirime leading to Maki where Papua police chief Ins. Gen Tito Karnavian and his party were attacked by a group of armed civilians in 2012.

The road on a steep mountain slope is winding making whoever in the road an easy target of ambush, Waterpauw said.

The village of Indawa is around 10 kilometers from Pirime or 45 km from Tiom, the municipal town of the regency of Lanny Jaya.

Papua police spokesman Sr. Comr. Sulistyo Pudjo said the four police officers in the group were hit at the ambush in the district of Lanny Jaya.

They were on duty to give local people greater awareness of law, Sulistyo said here on Tuesday

Zulkifli and Prayoga were hit on the head and died and the two other were wounded, he said.

"We condemn the attack . It is contemptible as the offices were carrying out social duty," he said.

Awareness of law is expected to implant a characteristic to think and practice democracy , he said.

Police want to help the people keep pace with the fast changing situation and bring modernity to the isolated areas, he added.

The mass guidance activities would contribute greatly to the program of the regional and district administrations in social affairs development, he added.

He said police are determined to catch the perpetrators, adding they have to be responsible for the crime they committed.

He said police are tracking down the group of criminals in coordination with the military.

Papua remains a hot spot for the country with separatist rebels still hiding in mountain jungles waiting for any opportunity to attack . 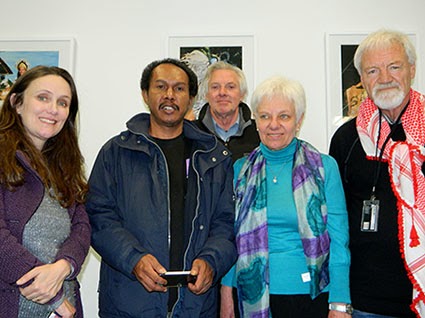 West Papua journalist and editor Victor Mambor (second from left) with members of the West Papua Action Auckland and Pacific Media Centre during a visit to the PMC office in Auckland. Image: Del Abcede/PMC
Pacific Scoop:
Report – By Anna Majavu
New Zealand Police Minister Anne Tolley and Defence Minister Dr Jonathan Coleman must meet with the first West Papuan journalist to visit New Zealand, says a spokesperson for West Papua Action Auckland.
Victor Mambor, 39, editor of the Jayapura-based newspaper and websiteTabloid Jubi, and chairperson of West Papua’s Alliance of Independent Journalists (AJI) is in New Zealand this week and visited the Pacific Media Centre yesterday.
He will also address a seminar on “West Papua: The Pacific’s secret shame” in Auckland at the weekend.