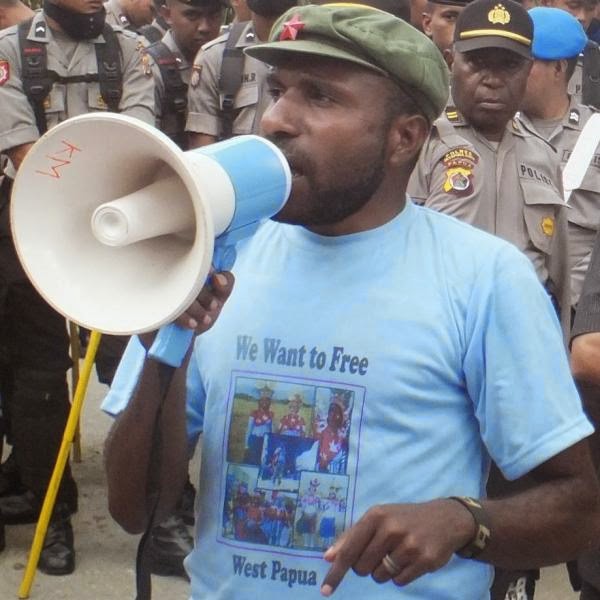 "I am responsible for the boycott of the elections without violence. Indonesia should not be forced people to participate Presidential Election, "said Yeimo, in a press release sent to suarapapua.com, Wednesday (07/02/2014).
According Yeimo, KNPB also does not force people to boycott presidential election, but only told to stay out of the agenda of the invaders who were oppressing them.
"The appeal aims to save KNPB true of duping people of West Papua and the destruction of democracy, the political rights of the people of West Papua who continue to be exploited to give birth actors invaders who were oppressing them."
"These conditions must exist that show the solution, and aims to open KNPB safety solutions for the people of West Papua's future, namely the referendum as the final measure of democracy," he said.
According Yeimo, KNPB also had never ordered people and members of KNPB to use violent means.
"If anyone is using violent means to block the presidential election, it was not of my members, and KNPB irresponsible," said Yeimo, who is still languishing in the Correctional Institution (LP) Abepura, Papua, as a political prisoner.
"From the beginning until now KNPB struggling peacefully, openly and with dignity, and therefore do not need to TNI Pore warned, terrorize, intimidate or arrest KNPB members in all areas of West Papua," he concluded.
Currently, more Yeimo, Indonesia and West Papua are in a war of international diplomacy to find a solution with the political status of West Papua.
"Indonesia must stop from pratek colonialism in West Papua," he added.
Earlier, Commander of the West Papua National Liberation Army (TPN-PB) Region La-Pago, Erimbo Enden Wanimbo refuse enforcement Presidential Election (Election) in the Central Highlands region, Papua.
"A referendum must be done, this is the solution for free from slaughter, murder, intimidation, terror, rape, and deprivation of the rights of the Papuan people. We expressed the attitude to boycott the 2014 presidential election., "He told the media yesterday.
According Wanimbo, West Papua has been used as a place to hunt wild boar commonly categorized as an area of ​​military operations (DOM) by the Indonesian security forces.
"We remind the TPN-PB and non-Papuan People of Papua, that TPN-PB will conduct counterinsurgency operations until any stones dilubang to fail of the 2014 presidential election in the Central Highlands region of Papua," he said.
Previously, Papua Police Chief and Commander XVII / Cenderawasih in various media will assert quell civic groups, and the TPN / OPM is trying to derail the 2014 presidential election in Papua.
Oktovianus POGAU
-------------------------------------------------------------------------------
Posted by AWPA Sydney News at 2:28 AM