5 ) VANUATU STATES ITS COMMITMENT TO LIBERATION OF WEST PAPUA

“The landslide happened in the Baya Biru Paniai illegal mining area,” Papua Police chief Insp. Gen Tito Karnavian said on Thursday. “Fiften people were buried [under the landslide].”
Of the 15 victims, seven were found dead. Two survivors have been evacuated. Police said they are still searching for the remaining six victims.
“The two survivors are Udin, 36, whose left hand was broken, and Yokbun, 29, who broke his left leg and sustained bruises on his face and all over his body. Both of them have been evacuated to the Nabira General Hospital on a helicopter at 4 p.m. Wednesday,” Tito said. “Six people are being searched in the soil, we don’t know their condition yet.”
Tito added that the landslide took place in a remote area in the middle of a jungle, making the site difficult to reach.
“There’s no telecommunication signal, people can only go there by helicopter,” Tito said. “We received news about this disaster from the Paniai police,” he said.
According to Tito, local residents in the area were also helping police officers and the local disaster mitigation agency in searching for the victims.

2) POLICE LOOK FOR PEOPLE WHO CALL FOR ELECTION BOYCOTT 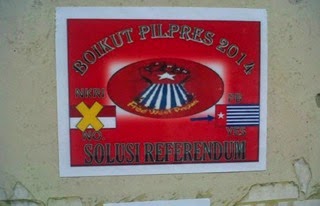 A sticker to boycott the election (Jubi)

Timika, 2/7 (Jubi) – Police are searching for people who distributed leaflets urging voters to boycott the July 9 presidential election and demand a referendum.
“A group led by Teni Kwalik is behind it because he made a statement calling for the boycott of the presidential election,” Mimika Police Deputy Chief Commissioner Wirasto Adi Nugroho said on Tuesday (1/7) in Timika, Papua.
He said so far police have only found some writings and leaflets.
“We have advised the local people to report to the police when they have any information, so we can arrest the perpetrators,” he said.
He further said police had erase the grafitti and destroyed the leaflets to avoid public unrest. Nugroho said the situation of Mimika Regency is relatively still favorable.
Mimika Police Chief, the Adjunct Commissionaire Senior Police Jermias Rontini Tuesday (1/7) attributed the peaceful atmosphere in Mimika, in particular Timika City to the participation of local community.
A Timika City resident Abdullah confirmed about rumors of possible unrest but the people were not provoked.
Meanwhile some residents reportedly held a prayer gathering to mark the Free Papua Movement’s anniversary at Jalan Sosial Gorong-Gorong. (Jubi/Eveerth/rom)

The Papua Police have arrested three people for allegedly smuggling arms into Papua by sea. The three suspects have been detained at the Papua Police headquarters. The seized weapons comprised two SS1 assault rifles, one FN rifle and 123 bullets for various firearms.
Papua Police chief Insp. Gen. Tito Karnavian told reporters on Thursday that the three suspects were arrested in Sorong, West Papua, as they were about to depart for Nabire, Papua, by boat on June 30.
Suspect Simon Kararbo from Papua was tasked with contacting suspects Manase Wesara and Roger Koloba from Tobelo, North Maluku, to look for firearms to hand over to an armed criminal group in Paniai led by a man called Leo Yogi.
Tito said the weapons were to be used for the group's activities, such as extortion and instilling unrest. Furthermore, Tito said the suspects had admitted that the weapons were left over from the conflict in Ambon more than a decade ago.
"The suspects admitted that the weapons were from the Ambon conflict, but several weapons were also smuggled from the Philippines," he said.
The suspects have been detained under the law on firearms and could face the death penalty if found guilty.
Deputy police chief Brig. Gen. Pol Paulus Waterpau said he was worried that arms trafficking in Papua could influence children to drop out of school as they may think that owning firearms would get them what they wanted. (fss/dic)

5) VANUATU STATES ITS COMMITMENT TO LIBERATION OF WEST PAPUA

Port Moresby, 2/7 (Jubi) – The Government of Vanuatu will continue raising the issue on West Papua to the UN.
After the meeting of Melanesia Spearhead Group (MSG) leaders at Port Moresby on last 26 June, the Vanuatu Prime Minister Vanuatu Joe Natuman reconfirmed the commitment to raise the issue on West Papua liberation. Natuman said the Government of Vanuatu continues to seek the opportunity to raise the West Papua issue to the UN level.
Towards the reporters, Natuman told the Government of Vanuatu is considering to propose the International Court’s opinion. “We consider seeking an opinion on the legal process held by the UN when handed over West Papua to Indonesia,” Natuman said in Port Villa, Vanuatu (30/6).
Earlier, the Vanuatu Prime Minister has been said the similar statement in Port Moresby.
“This process (to the UN) is still open for us. But now we have to deal with such a problem like this. We talked with Indonesia, held a dialogue with Indonesia and all Melanesian representatives about tendencies, in particular the political tendency in provinces of Papua and Papua Barat,” said Natuman in Port Moresby on 27 June.
Natuman also respected the MSG’s decision to seek more proactive approach with Indonesia to find a solution to deal with the development issues in Papua. Under the administration of Prime Minister Moana Kalosil, Natuman was the representative of Vanuatu in the MSG mission to West Papua, but then Vanuatu withdrew its participation in the mission.
Since becoming the independent state, Vanuatu has shown its commitment towards West Papua’s issue. Some former prime ministers of Vanuatu including Walter Lini and Barack Sope were actively raising the West Papua issue to the UN and then Moana Kalosil and Natuman continued to support. Even Kalosil pointed the MSG countries has denied Papuans as part of Melanesian entity.
“Vanuatu is the only country in the world who is not fear to stand up and speak for the liberation rights of Papuans whether in the United Nation or in other world’s forum,” Moana Karkas Kalosis said in his speech in front of the UN Human Rights Council in Geneva in last March.  (Jubi/Victor Mambor/rom)
--------------------------------------------------------------------------------------
Posted by AWPA Sydney News at 3:08 PM