1) KNPB calls for a peaceful boycott 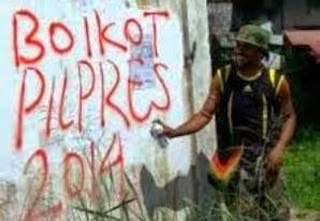 PAPUAN, --- Jayapura West Papua National Committee calls upon all the people of West Papua that there should be no recognition of and granting
voting rights to the Indonesian presidential election to be held next July 9, 2014.

"For indigenous people of Papua was not part of Indonesia, but the original person Papua is one of the nation's existing earth, who have equal rights with other nations to determine their own destiny. So the rights of indigenous Papuans do not pick the absolute rights of others, "said Head I KNPB, Agus Kossay, to suarapapua.com, Monday (07/07/2014) afternoon.
The few things that need to be diperhatiakan by all the people of West Papua, according Kossay, namely; First, the entire civilian population of West Papua that menjelangPilpres should not boycott presidential elections on July 9 KNPB beyond appeal.
Second, KNPB will be responsible in accordance with the general appeal that has been issued nationally, boycott the presidential elections with peaceful means, dignified and democratic.
Third, KNPB firmly reject attitudes of driving or criminalization movement KNPB with some events that happened recently, and condemned the arbitrary arrest by the police to KNPB members for no apparent reason.
Fourth, ask the police to immediately release KNPB chairman of the Timika region KNPB Diplomacy Commissioner on behalf of Ruben Kayun still detained for no apparent reason in Mimika Police.
And fifth, the civilians menghimbaukan KNPB people of West Papua to avoid incitement, solicitation by elements that are not responsible to do something beyond the call KNPB ahead of presidential elections.
ARNOLD Belau

In a written appeal, Yeimo said, "If you want war, please search the battlefield, respectively, and do not sacrifice the people of West Papuan civilians and non-West Papua."

Affirmed, political choice and the people of West Papua KNPB is with the attitude of not participating choosing, not through acts of destruction, dissolution, terror or intimidation.

The military / police, he called for the immediate stop common ways that always used to take advantage of securing project funding and promotion in every moment of the mess created over the years.

"And to the West Papua National Liberation Army (TPN PB) and West Papua Revolutionary Army (TRWP), appreciate the struggle of peace and dignity that is being conducted by West Papuan civilians. TPN / OPM / TRWP and military / police do not force people to presidential election a success and election boycott in a violent manner, "he wrote in a letter of appeal.

Yeimo stated, "The struggle of the people of West Papua is a fact that does not need to be hidden, shackled, let alone harmed in ways that are not humane. Therefore, our attitude is not subject to the Indonesian colonial powers should be respected by Indonesia and the world." (SYO / MS)

tabloidjubi.com Jul 7th, 2014 0 Comment
Jayapura, 6/7 (Jubi) – A recent incident at the Youteva traditional market on 2 July has been deemed to be part of a big scenario to disrupt  the July 9 presidential election, A young Papuan activist and Papuan political prisoner, Dominikus Surabut told tabloidjubi.com at the Abepura Prison on last Friday (4/7).
“It has nothing to do with Papua’s struggle for independence, but in fact it’s part of a scenario played by some individuals or certain groups to divert issues,” he said.
Surabut added those old patterns could not be longer used to solve the basic problems in Papua, but it could only possibly enhance the list of violation by the police and military as well as ruin the Indonesian image as democratic country in the international community.  Therefore he asked each party; in particular Papuans (as the victim) for not taking opposite if does not want be caught in the scenario.
Meanwhile the young Papuan activist Allius Asso has the similar thought.
“We are not foolish to keep being fooled.  The incidents were always happening in each national holiday but Papuans are smart dealing with it. We agreed to say this is part of a huge scenario by some individuals or certain group who deliberately set up the situation to give the impression if the election in Papua was chaotic to get the security funds,” he said. (Mecky / Jubi/rom)

Jayapura, Papua (ANTARA News) - Three miners buried by a landslide that occurred in a traditional gold mining site in Baya Biru of Paniai District, Papua Province, on July 1, had yet to be found, a military officer said.The missing miners are identified as Yusuf, Robi and Wande, Chief of Nabire District Military Command Lt.Col.Yohannes Purba said Monday.Speaking to Antara in a phone interview, he said the landslide buried 13 people but ten had been found. Among them were Lukman, Alafa, Iwan, Awaludin, Nasrudi, and Ahmad, he said.Two miners, named Udin (36) and Fred Yakbun (29), survived the last Tuesdays landslide, he said adding that the disaster site could only be reached through a 35-minute flight by a helicopter and followed by a 24-hour walk.(Reporting by Evarukdijati/Uu.R013/M009)
Editor: Priyambodo RH
---------------------------------------------------------------------------------------------------
http://www.thejakartaglobe.com/business/indonesia-concludes-talks-contract-renegotiations-freeport/
[Updated at 9 p.m. on Monday, July 7, 2014]
Jakarta. The Indonesian government announced on Monday it concluded contract renegotiations with Freeport Indonesia, then warned Newmont Nusa Tenggara to withdraw its international arbitration case or face the point of no return.
Freeport Indonesia, operator in Papua of the world’s largest gold mine and third-largest copper mine, had agreed with new terms proposed by the government, according to Chairul Tanjung, the chief economics minister.
Chairul added that final agreements on the miner’s new permit will be submitted during a cabinet meeting for approval.
The ministry expects to conclude renegotiations with all 109 Contract of Work (CoW) and Coal Contract of Work (CCoW) holders operating in the country by September.
So far, 40 CoW and CCoW holders have managed to reach common ground with the government to renew their permits.
Renegotiation has centered on six points: the company’s value-added obligation, contractual period, size of operation, local content obligation, government revenue and divestment.
Richard Adkerson, chief executive of Freeport-McMoran Copper & Gold, the parent company of Freeport Indonesia, has been in Jakarta for at least a week to meet with officials from the Energy and Mineral Resources Ministry.
The government has been pushing for large-scale miners like Freeport Indonesia to alter its contract to fall in line with a 2009 Mining Law, which replaced the CoW and CCoW  with a new contractual scheme called Mining Business Permit.
Freeport Indonesia has been given permission to resume exporting its copper concentrate as soon as the Finance Ministry completes revising its regulations on export duties, according to Trade Minister M. Lutfi. Lutfi previously mentioned that the amount of copper concentrate stocked in Freeport Indonesia’s warehouses could be valued at some $1 billion.
Simon Sembiring, a former director general for coal and mineral resources, applauded the government’s effort, but added that “they must invite lawmakers and regional governments to sit together and discuss the issue to avoid possible clashes in the future,” Simon said.
Newmont Nusa Tenggara (NNT), which operates the Batu Hijau copper and gold mining site on Sumbawa island, has locked horns with the government after six months of renegotiations resulted in ministry officials shooting down the miner’s request to be exempted from a mineral ore export ban.
The five-year old law, which went into effect in January, pushed NNT to declare force majeure on its mines last month after its warehouses were becoming full from its inability to export concentrates. The miner reported the Indonesian government to the International Center for Settlement of Investment Dispute in response.
“We will give them one more chance to retract it [the complaint]. If Newmont continues to push it [forward with the filing], they will lose,” Chairul said.
Energy Minister Jero Wacik considered NNT’s move an act of bad faith.
“We nearly reached an agreement [with Newmont] on three occasions, but out of nowhere they filed the case against us,” said Jero.
------------------------------------------------------------------------------------------------------

Jayapura, 6/7 (Jubi) – Demi Kepno (28), who died in a shooting incident at Youteva traditional market, was buried at Tanah Hitam public cemetery on Saturday (5/7).
Yalimo Regent ER Dabi was present at the funeral to give his last respects.
One of victim’s relatives, Rev. Tera Kepno, said Kepno’s killing was inhumane. Kepno was  kidnapped and taken by car to the Yanmor police station by unidentified person on Wednesday, (2/7) at around 21:00 Papua time.
“We believe that he was tortured before being shot in the stomach, which caused his death. Then they took his body to the Bhayangkara Hospital,” Rev. Kepno said.
He added on Friday (4/7), he was informed his nephew was in the hospital and he checked for confirmation. It was true his nephew was in the hospital but he was already dead.
Related to this incident, Yalimo intellectual Yenius Yare said the civilians in Papua are victims of the anger of some police officers. He was read the Cenderawasih Pos published on Friday (4/7) that reported an allegedly suspect of the murder of police has been questioned and arrested by the police, but because he was fought, the police had to shot him.
“We ask the police to immediately be responsible and do a thorough investigation to resolve this case. We also deny the involvement of our brother in the incident at the Youteva traditional market because he was at home when the incident has been occurred,” Yare further said.
Therefore he asked the Papua Police Chief and the police to thoroughly investigate the mysterious death. Furthermore, he also asked the policy makers to address some cases that lately happened in Jayapura City. (Jubi/Aprila/rom)
----------------------------------------------------------------------
Posted by AWPA Sydney News at 2:12 PM