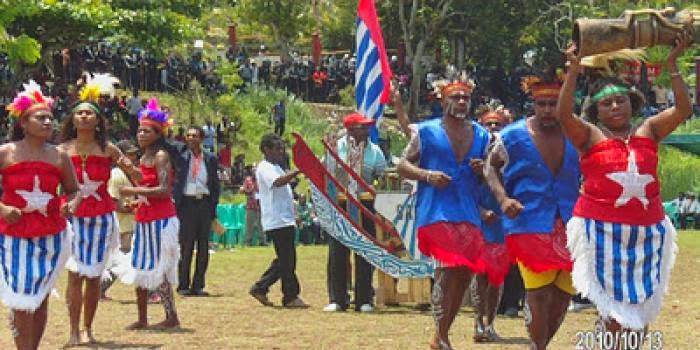 Dance when the Papuan People's Congress (KRP) III and the declaration "West Papua Federal State". Photo: Ist
Jayapura, STEP MAGAZINE - "President of the Federal State of West Papua", Forkorus Yaboisembut and "Minister of the Federal State of West Papua", Edison Waromi rumored to be dibebaska on Monday (07/21/14) morning from prisons Abepura, Papua.
They detained since last October 2011 in the field of Zacchaeus Padang Bulan, Abepura Papuan People's Congress in the event of Papua Declaration (KRP) III and was jailed for 33 months.
"Chief of Police of the Federal State of West Papua", Elias Ayakeding say, liberation Forkorus and Edison Waromi been a dream of the people of West Papua Federal far. Karenaya, he said, when released will be dijempat by about 1,000 people from the region Mamta.
"In the pick-up will be backed by the Federal Republic of West Papua police numbering about 1000 people from Mamta region," said Elias told reporters in CaFe Prima Garden Abepura on Friday (07.18.14), adding yesterday before giving a press conference he had met Forkorus in Abepura Prison.
According to Elias, it has agreed to all the activities along the way ranging from Abepura to Sentani eliminated.
"So we will be starting from Abepura Prison guard up residence in Sabron. And during this process we ask that trader or businessman who sells on the side streets of Abepura to Sabron Yaru can stop their activities in order to provide a sense of togetherness and respect," he said.
Furthermore he says, pihkanya has scheduled a free moment later, Forkorus and Edison will be welcomed with traditional dances of Papua. However, it ordered that the masses should not be carrying the Morning Star flag and sharp tools.
"His message (Forkorus, Cs) like it, do not bring the Morning Star flag or sharp tool. Please come with music, flute and dances Tambu but still maintain security," said Ayakeding.
However, further Ayakeding, when it was found there were still carrying sharp tools or the Morning Star flag, it hoped to be seen from the personnel committee although there are established.
"That's what I say that security is our shared responsibility, but pack Forkorus been confirmed for everything orderly," he continued.
Of communications made to confirm when Abepura Prison, Elias concluded determination and spirit to keep fighting for independence in Papua in a peaceful and dignified. Forkorus believe will remain on the bow of a struggle as it was before he was arrested.
Elias also asked the military and the police to be more professional in the escort up to his residence.
"I'm the TNI / police more professional in their work," he added hope. (Abraham Abeth You / MS)
--------------------------------------------------------------------------------------------

Military commander (Regional Commander) XVII of Paradise, Major General (TNI) Christian Zebua while giving a press conference. Photo: Ist
Jayapura, STEP MAGAZINE - military commander (Regional Commander) XVII of Paradise, Major General (TNI) Christian Zebua said it condemned the ambush and shooting with arson in Puncak Jaya and Jaya Lany conducted Strangers (OTK) against civilians.
"This group does not know God like, in terms of their actions religion is contrary to the teachings of God and violate God's law. Especially now in the midst of our brothers who were Muslim fasting Civilian Armed groups are very inhumane acts and not respect religious tolerance. therefore once again I condemn the actions undertaken by the civil Armed Group (BCC) against innocent civilians, "said he as quoted kodam17cenderawasih.mil.id.
Regional Commander has also been ordered to soldiers who served in the area of ​​the crime scene (TKP) to continue to assist the police to seek, pursue and arrest the perpetrators of the shooting of civilians.
"For that I hope to the community do not hesitate to notify and inform the military-police security forces if there are things that are suspicious. Assured the military has always been in the midst of the people, always helping people and will protect the people. We do not hesitate -doubt if there are armed groups that interfere with people we will act firmly, "said Regional Commander.
From this incident, the military and police to take steps to coordinate with the District Government and Lany Puncak Jaya Jaya, Community Leaders, Indigenous leaders and religious figures to prevent such incidents do not happen again and to increase awareness and preparedness, intensified patrols TNI and police in vulnerable areas.
Known, shootings in the area Dugume Lany Jaya regency occurred on Thursday, July 17th, 2014 at 17:10 local time. Nasito (47), a motorcycle taxi driver died after being hit by bullets from firearms. While the events in Pucak Jaya you can read here (OTK Intercepted Cars in Puncak Jaya: 2 Killed, 1 Critically Burned Car and 4).
As of this writing, no information majalahselangkah.com liability of any party for this shooting. (Yermias Degei / MS)
-----------------------------------------------------------------------------------
Posted by AWPA Sydney News at 1:31 PM