At the end of June 2014, there were at least 76 political prisoners in Papuan jails.
The West Papua National Committee (Komite Nasional Papua Barat, KNPB), a Papuan pro-independence activist organisation, was heavily targeted by Indonesian security forces this month. There were at least 24 arrests of KNPB members across Papua in Boven Digoel, Timika and Merauke. Police performed a mass arrest of 20 KNPB members in Boven Digoel under the auspices of the Social Organisations Law (RUU Organisasi Kemasyarakatan, RUU Ormas), claiming that the KNPB was an illegal organisation as it was not registered with the Department of National Unity and Politics (Kesatuan Bangsa dan Politik, Kesbangpol). The police also stated that any KNPB attributes such as flags and symbols were thus also considered illegal. The use of the Ormas Law to de-legitimise and control indigenous civil society groups, especially ahead of planned demonstrations or commemorative events, continues to place unacceptable limitations on freedom of assembly and expression in Papua.
The timing of crackdowns on KNPB members this month suggests that Indonesian authorities used arrests and raids to prevent activists holding events commemorating 1 July, a date Papuans consider to be their national day. There was also an election-related political arrest, following a common pattern during election periods in Papua, where pro-independence activists call for election boycotts, and are subsequently arrested. This month in Merauke, police arrested one activist and surrounded the KNPB Secretariat, claiming that the activists planned a socialisation event to boycott the 2014 Indonesian Presidential elections on 9 July 2014. Papuans Behind Bars has documented similar arrests in Bokondini in 2004 and in Nabire in 2009.


Meanwhile in the Netherlands, Iskandar Bwefar, a Dutch Papuan, was arrested in the Hague for peacefully waving a Morning Star flag during a procession celebrating Dutch Veterans Day. Dutch civil society groups reported that the flag, a symbol of Papuan identity, was banned from the parade procession by the Dutch House of Representatives following pressure from the Indonesian authorities. This arrest echoes that of three Papua New Guinea nationals in December 2013 when the Morning Star flag was raised during an event in Port Moresby. The willingness of foreign governments to legitimise the criminalisation of the Morning Star symbol, in contravention of international law and reports and opinions issued by the UN Working Group on Arbitrary Detention, is of particular concern. At a broad level, this development indicates that Indonesia is becoming increasingly pro-active in its efforts to quash support for Papuan independence among exile communities.

Jayapura, 14/7 (Jubi) – Solidarity with Indigenous Papuan Traders (Solpap) welcomed a statement by presidential candidate Joko Widodo that he is planning to build a special market for Papuan traders.
Dozens of indigenous Papuan traders met the head of the Cipta Karya division of the Papua Public Works Department, Yan Ukago, to urge the government to be serious about freeing the market location which is still being occupied by the Papua Transportation Department as a bus terminal.
“We are pleased with Jokowi’s statement that if he is elected as president, he will build a market for Papuan traders. This is certainly good news for us. So, we immediately met department of Public Works officials (DPU) to know their further plans in preparing the location that had been promised ,” Solpap coordinator Rev. Dora Balubun told journalists in Jayapura, Papua on Friday (11/7).
She said the provincial government should involve police to deal with the dispute over the land.
“Moreover, the land will be used to build terminal Damri is a government-owned asset. Obviously, we will continue to follow up the government’s promise to build a market for indigenous Papuan traders,” he said.
The head of Papua Public Works Department of Cipta Karya, Yan Ukago said, the construction of a new terminal and offices,  located next to the Youtefa new road in Abepura were still pending.
“However, currently we are having a little problem due to the blockage by land owners,” he said.
“It is still under construction, although there is no agreement made with the customary owners. Last year’s construction went well, but now we encounter land issues, ” Ukago said
Meanwhile, the planning process has been presented which involved a team of anthropologists. It means that the Papuan trading habits are studied and assessed. Still, the development cannot be realized yet.
“If there are no non-technical issues, the new terminal construction will be completed in 1,5 years, “he said.
He then added that if the construction of Papuan Indigenous market has not been completed within 1.5 years, the government through the Department of Public Works will replace the market’s tent  because it only lasts for five years.
“The market is now used as the indigenous Papuan traders which was built in 2010. So if the permanent market construction has not been completed, then the roof tent will be replaced. According to the traders, the condition of the tents already began to tear, “he said. (Jubi / Alex/ Tina)

Jayapura, 10/7 (Jubi) – West Papua National Committed claimed burning thousands of presidential election’s ballots, published in the KNPB’s official site www.knpbnews.com.
KNPB said about 4,952 invitation letters (C5 form) and 500 void ballots from Sentani, Wamena and Jayapura have been burned yesterday (9/7). They claimed people of Papua intentionally collected the ballots to be burned without mentioning how they got it.  Further it also claimed to have received 200 ballots to win Prabowo-Hatta to be burned.
The First Chairman of KNPB, Agus Kossay during the burning action said the people of West Papua decline the Presidential Election and call for referendum. “People said to boycott the election to determine their right for independent,” he said.
Meanwhile, the Chairman of KNPB for Timika, Steven Itlay said the people of Papua had successfully interpreting the calling for abstain in the Presidential Election 2014.
“KNPB for Timika Regiona and the Bomberay Regional Parliament (PRD) sent its gratitude towards the people of Papua, especially to those who live in the Bomberay region for their participation to not get involved in the Presidential Election of the Republic of Indonesia,” Itlay quoted by suarapapua.com. (Jubi/Mawel/rom)
(Visited 6 time,

5) DPR PAPUA: PEOPLE’S PARTICIPATION IN THE PRESIDENTIAL ELECTION HAS DECRASED DUE TO LACK OF SOCIALIZATION 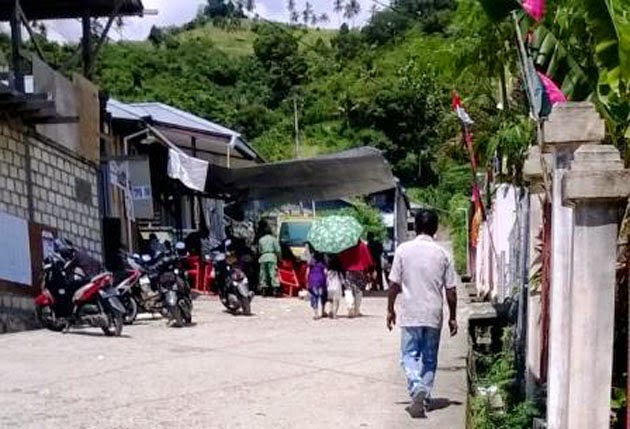 Peoples participatioin on the presidential election has decreased (IST)
Jayapura, 14/7 (Jubi) – According to parliament’s member, people’s participation in the Presidential Election has decreased due to the lack of socialization conducted by the local Election Commission (KPU) and Election Watch Board (Bawaslu).
“As the organizer, their performance was better than what they did in the last Legislator Election, but they still need to be evaluated in particular at the stages of socialization and distribution of voting invitation (C6),” the First Deputy Chairman of Papua Parliament, Yunus Wonda on Friday (11/7).
He further said based on the ground monitoring, most of people admitted to receive the invitation a night before the voting day. Event some of them had not receive the C6 form and made them to vote by showing their ID card.
“People’s participation in the election was very low. It also might be happened because of factor of interest. For instance, at the last Legislator Election, people were enthusiastic because they had personal interest to vote those who might be their families, brothers or colleagues. But in this case, the Presidential Election is only for the national interest,” he said.
According to Wonda, based on his observation to some polling stations, there were polling station with hundreds of registered voters but there were only 30 – 40 people who came at the voting day though the officials should be waited until 14:00 pm. “This situation should be evaluated for the future,” he said.
A day earlier, the Presidential Election Team from the National Human Rights Commission published their findings in Yahukimo Regency and Jayapura Municipality. The National Human Rights Commissioner, Nur Kholis said they found there’s no special or mobile polling station in Jayapura located in the Dok II General Hospital, Abepura Asylum and Jayapura Police Office. Further the prisoners of Jayapura Police Office couldn’t vote because they had no ID card.
“There’s also no special or mobile polling station at the Dekai General Hospital and Yuhukimo Police Office, therefore the voters couldn’t use their rights.
Meanwhile people couldn’t vote in some polling stations in Pasar Lama, Halabok and Seradala due to the absence of the local commission officials,” Nur Kholis said.(Jubi/Arjuna/rom).

6) PAPUAN APPLICANTS DO NOT RELY ON “ AFFIRMATIVE ACTION”

tabloidjubi.com Jul 14th, 2014 0 Comment
Jayapura, 14/7 (Jubi) – The head of the Jayapura Regional Employment Board, Frans Pekey, urged Papuans applying for civil service jobs should not rely on a special policy or affirmative action.
“We can just rely on the policy. If it continues like this, how can we move forward? Sooner or later we have to be ready to keep up with changes and developments at the national and global levels,” he told tabloidjubi.com on Thursday afternoon (10/7).
It is the time for the job seekers in Jayapura city to utilize information technology, he said.
“Do not rely on diplomas alone because rules are constantly changing,” he added.
Commenting on the online examination system or Computer Assisted Test (CAT) in Jayapura municipal government, he said his office was still exploring the possibility of cooperation with the head of Jayapura BKN, Cenderawasih University and high school/vocational schools.
“I think Jayapura city applicants are ready to use the system in recruitment of civil servants, ” Pekey said.
Even so, he admitted that he will go with any decision whether there are other policies that would later proposed, such as changes in the use of the CAT system or Computer Answer Sheet (LJK) which until now is still enforced.
Earlier, Jayapura mayor, Benhur Tomi Mano said that in July, the CAT system will be used in the recruitment process. ” We will apply the CAT in recruitment of civil servants in July, “he said. (Jubi / Sindung/Tina)

7) PAPUA PARLIAMENT: THE ELECTED PRESIDENT MUST FINALIZE THE OTSUS PLUS DRAFT

Jayapura, 14/7 (Jubi) – Papua Parliament declared anyone who been elected as the President of the Republic of Indonesia has the obligation to finalized the draft Special Autonomy Plus (Otsus Plus) Law that already submitted to the central government.
“The Otsus Plus is the open gate for Papua development in the future. Currently the draft is still reviewed by the team of the Minister of Internal Affairs, including some articles about the Governor General, tax authorities and so on,” said the First Deputy Chairman of Papua Parliament, Yunus Wonda on Friday (11/7).
According to him, the Law proposed the Papua Government to have the wide authorities in community development to improve their welfare. But, the Central Government continues debating on the term of Governor General. He further said the Law is the win-win solution to find solutions in Papua.
“After all, Indonesia needs Papua,” he said.
At the end of January 2014, the President Susilo Bambang Yudhoyino has received the report on the draft from the Governor of Papua, Governor of West Papua, Papua People’s Assembly and other government officials.
President’s Special Assistant for Regional Autonomy and Local Development, Masud Said, said in one occasion the revision of Otsus Plus draft about Papua has came to the final phase and ready to be submitted to the National Parliament for further review.
“The extended Otsus Plus draftwould give the wider room to the government and the people of Papua. That’s why it’s called the ”Special Autonomy Plus”. Although it’s not perfect and uncompleted, but for us it’s an option,” said Masud Said at that time.(Jubi/Arjuna/rom)
----------------------------------------------------------------------
Posted by AWPA Sydney News at 2:58 PM