Jayapura. Papua police on Monday arrested three persons who they say tried to supply firearms and ammunition to the Free Papua Organization (OPM).
The three were arrested on the ship Lambelu, which was berthed at Sorong Port in West Papua, at 8.15 p.m local time.
When the suspects were searched, police found one SS-1 assault rifle, a jungle carbine and an FN handgun as wells as 87 rounds of ammunition for the SS-1, 21 rounds for the carbine and 14 for the pistol.
The suspects were identified as Simon Karabo, Duka Roger Koloba and Manase Wisara.
Police allege the three brought the firearms to Manado, North Sulawesi, from the conflict-torn south of the Phillipines through the Indonesian island of Sangihe Talaud, which is close to Mindanao. From Manado, police say, they went to Nabire, Papua, by ship, with the intention to hand the weapons to an OPM group under the leadership of John Magai Yogi, operating in the Papua district of Paniai.
Manase and Roger are from North Halmahera, in North Maluku province, while Simon was said to be a member of the Paniai OPM group.
The chief of Papua Police, Insp. Gen. Tito Karnavian, confirmed the arrest, while adding that police were questioning the suspects in the hope of locating other members of the group.
----------------------------------------------------------------------------------------------


Jayapura, 30/6 (Jubi) – To safeguard the presidential election on July 9, the Papua Police have sent personnel to areas that are considered vulnerable.
Papua police chief General Inspector (Pol) Tito Karnavian said some police officers have been dispatched to some polling stations (TPS).
“Some members are already shifting to the polls. For example, from Pegunungan Bintang  to the difficult areas. Regarding the possibility of disturbances by rebels, we also anticipate and strengthen our forces in some areas,” Tito said on Monday (30/6).
The vulnerable areas include the Indonesia-PNG border, Lanny Jaya, Puncak Jaya, Yapen, Paniai, Tolikara and  Jayawijaya regencies. Furthermore, he said, every police station has also been coordinating with military units in their territory.
“Regarding the threat of a boycott by certain groups, it is not very significant because the group who  issued the call for a boycott is not clear. We also perceive that  the group to be small and will not influence the public,” he said.
He also has ordered every police chief to evaluate their own territory and the potential areas where conflicts could occur.
“The police chief reminds them to report back if more police are needed or coordinate with military commanders,” he said.  (Jubi / Arjuna/ Tina)
------------------------------------------------------------------------
A google translate of article in Majalahselangkah.com. Be-aware google translate can be a bit erratic.
Original bahasa link at
http://majalahselangkah.com/content/-amp-bogor-peringati-hut-ke-43-proklamasi-bangsa-papua 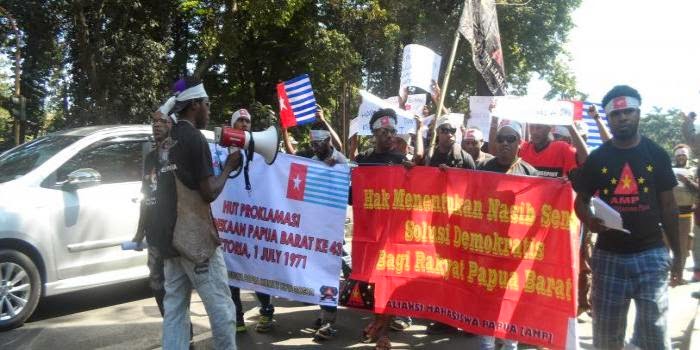 Bogor, STEP MAGAZINE - Dozens of students and citizens who are members of the Papua Student Alliance (AMP) Committee Bogor back down the road today, Tuesday, July 1, 2014 as the 43rd anniversary of the declaration of Papuan independence.

AMP masses demanded to Indonesia, U.S., the Netherlands and the UN to recognize the state sovereignty of West Papua ever independent on December 1, 1961 and proclaimed on July 1, 1971 by Zeth Brigjend Jafet Rumkorem Waris Village, Victoria West Papua.

Majalahselangkah.com observation, the action starts at 09.00 am, the masses gathered at the entrance of the Garden III to take action towards Kujang monument which is located in the heart of Bogor. Originally published in the call for action that, in the form of long march, with the circumference of the Garden and Monument Kujang.

On the sidelines of the action coordinator Yosias Iyai asserted, give freedom and determine their own fate as a solution to the problem of the political status of West Papua.

"Immediately shut down and stop the exploitation activities of all the companies that exist in Papua, especially PT. Freeport and the Indonesian army immediately withdraw from Papua New Earth," said Iyai.

Adolphina Tekege convey that it is better for the nation of Papua for independence and is a natural thing when the nation of Indonesia acknowledges his past mistakes and realize the right to self-determination is also owned by the people of Papua.

Bogor City Committee Chairman Samuel AMP Nawipa also confirmed, coincides with the anniversary of the proclamation of independence of the nation of Papua 43, AMP still demanding the independence of Papua have been taken forcibly conspiracy Indonesia, the United States, the Netherlands and the United Nations.

http://knpbnews.com/?p=4404
4) Timika celebrate the anniversary of the Proclamation of the State Constitution of West Papua
July 01, 2014 By: knpbtimika Category: KNPB Region

when Worship
when Worship
Timika, KNPBNews - On this day on July 1, 2014 of the Regional Parliament Mimika (PRDM) mediated by the West Papua National Committee (KNPB) Timika region has held a Worship Celebration in commemoration of the Declaration of the Constitution of the Republic of West Papua in Papua Organization Headquarters (OPM) in Victoria Port Numbay_West Papua.
Dated July 1, 1971 is a day that has been etched in which the history of the Eternal for the People of West Papua nation and will be remembered by a whole generation of West Papuan people throughout the centuries, dated July 1, 1971 is one day that has spawned Identity for Papua and West Papua People's Nation in the territory of Sorong-Merauke.
And on July 1, 1971 is the National Day for the People of West Papuans and mandatory Nations commemorated by the West Papua People and Society generally domiciled in the territory of West Papua.
Pautauan KNPBNews Worship Celebration Lunch was delayed until 12.00 that morning as Chairman of the Regional Parliament Mimika (PRDM Responsibility activities dated July 1, 2014 in Timika area, then they met with New Mimika police chief for megosiasi to issue all three (3) members of the KNPB captured it.
Successful negotiation and police-issued to three (3) members of Timika Region KNPB.
Support worship begins with chanting and an opening prayer, testimony and continued with the Word of God by Pastor. Daniel Bagau, God's Word is picked up in the Psalms, 123: 1-4, which reads: To thee I lifted up my eyes, O You who dwell in heaven. See, as the eyes of servants look to the man hands his master, as the eyes of servants look to the hand of women mistress, so our eyes wait upon the LORD our God, until he have mercy upon us. Have mercy on us, O Lord, have mercy on us, because we had enough of the insults; Our souls had enough of the banter of people who feel safe, with the contempt of the proud.
Furthermore followed by speeches and remarks preceded by Vice Chairman PNWP envoy Bomberay host Yatipai Romario and subsequent remarks followed by the Chairman of the PRD Mimika Abiud Degei host. This was followed by the Feast of love and after that the people of Papua disperse in an orderly manner.
Monitoring KNPBNews that morning until this afternoon, the military did pemebersihan across the walls with paint and removing posts PILPRES 2014 SOLUTIONS REFERENDUM.

Jakarta. Award-winning US journalist Allan Nairn continued on Tuesday to shake up Indonesia’s presidential campaignby publishing another article on his off-the-record interview with candidate Prabowo Subianto conducted in 2001.
Nairn published articles on June 21 and June 26, detailing Prabowo’s 2001 comments on his involvement in human rights abuses in East Timor. The article published on July 1, however, moves away from revelations on Prabowo’s actions — “he killed civilians,” Nairn wrote — and documents the former Army Special Forces (Kopassus) commander’s links to the United States’ intelligence establishment.
“I was the Americans’ fair-haired boy,” Nairn said Prabowo told him, characterizing the relationship as that of “good friends.”
Nairn writes that this relationship changed, however, after Prabowo was dumped out of power with the fall of Suharto, his father-in-law at the time, in 1998. The US switched loyalties to military commander Wiranto — “Prabowo’s most-hated rival” — and began criticizing Prabowo for the abuses he had perpetrated with US backing. According to Nairn, Prabowo was chastened by this experience, which was compounded by Washington denying him entry to visit the United States for his son’s university graduation.
The issue of Prabowo’s relationship with the United States was exhumed in diplomatic circles as recently as last week, when US Ambassador Robert O. Blake Jr. took the controversial step of e-mailing the Wall Street Journal in what was perceived by some in Prabowo’s camp as being tantamount to meddling in Indonesia’s election process.
The ambassador expressed no position on either presidential candidate but, the letter read, “We do, however, take seriously allegations of human rights abuses, and urge the Indonesian government to fully investigate the claims.”
“Washington’s man in Indonesia,” and “our fair-haired boy,” has not been fully investigated, despite his commanding officer in 1998, Wiranto, going on the record last month to say that Prabowo was thrown out of the military for ordering the abduction of Indonesian pro-democracy protesters — 13 of whom remain missing, presumed dead.
Nairn also recounts a quotation by Robert S. Gelbard — the US ambassador to Indonesia from 1999 to 2001 — in which he calls Prabowo “perhaps the greatest violator of human rights in contemporary times among the Indonesian Military. His deeds in the late 1990s before democracy took hold were shocking, even by TNI standards.”
Nairn notes, however, that Gelbard’s predecessor, Stapleton Roy, praised Prabowo in diplomatic cables for “maintaining discipline and restraint.”
This took place at a time and in an environment where schisms in the TNI conferred a sense of unpredictability for the United States, Nairn writes, and Prabowo was a useful character for Washington to cool the nationalist elements in the TNI.
“Within Indonesia,” one US cable said, “especially in the armed forces, an internal debate pits two factions against each other.  One faction is progressive, educated, and enlightened… The other is introverted, ethnocentric, anti-Western.  It believes that foreign education and training is a polluting influence. We have an opportunity to influence that debate and the future in support of our long-term interests.”
The bulk of Nairn’s latest article concerns the details of Prabowo’s on-again off-again relationship with the United States, including Prabowo facilitating the presence of US special forces on Indonesian soil and him being handled by the highest levels of US power — including the secretaries of defense and special operations commanders.
The original interview was conducted under the condition of anonymity. There were no recordings of the exchange. The statements that Nairn attributed to Prabowo were sourced from his notes.
Posted by AWPA Sydney News at 1:53 PM