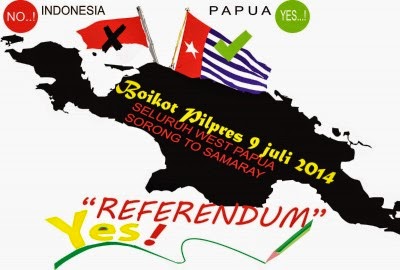 From a KNPB posting

The security forces in West Papua have raised the security level in the territory to “Siaga Satu” (full alert) leading up to the presidential election on the 9 July, Maj. Gen. Christian Zebua said in Jayapura on Sunday.

According to the Jakarta Post, "Christian said the military command did not want to see any more violence and bloodshed occurring in Papua, therefore, it urged all parties in the region to refrain from carrying out violent acts or attacking security posts".

Joe Collins of AWPA said, “so far the only violence that has occurred in West Papua is from the security forces. They have been targeting the KNPB simply because they have handed out leaflets calling for a boycott of the elections”.

In Timika 7 KNPB activist were arrested for distributing leaflets calling for a boycott of the presidential election, and six activists were arrested in Jayapura.

The latest arrest occurred on Saturday when a woman was arrested for handing out flyers calling for a boycot in the town of Kaimana in the  Fak Fak region.
http://awpasydneynews.blogspot.com.au/2014/07/woman-in-kaimana-arrested-for.html

Joe Collins said, it is 16 years since the tragic events of the Biak Massacre (when scores of people were killed by the Indonesian military for holding a peaceful flag raising ceremony in Biak),  and people are still being arrested and beaten in West Papua simply because they are calling for a boycott of an election. Where are the great improvements in democracy we are told has occurred in Indonesia?

West Papuan leaders in West Papua and in exile have called for a boycott of the election.