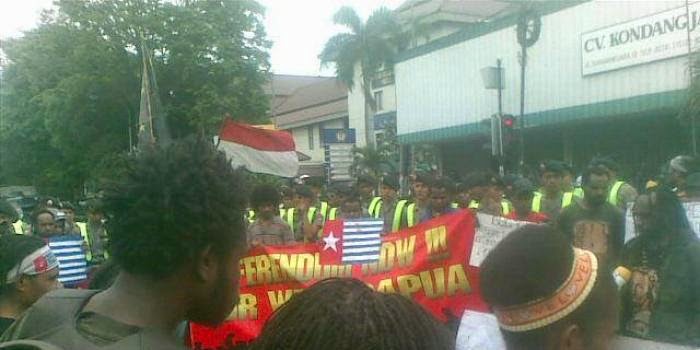 Yogyakarta, STEP MAGAZINE - Confirms that the seizure of West Papua in the lap of the Republic of Indonesia (Republic of Indonesia) through the determination of the people of the opinion (the Act) in 1969 carried undemocratic and gross human rights violations, Papua Student Alliance (AMP) study in several cities in Java peaceful protest.

In Semarang, the city committee AMP down the road. They called for a review of the Act of 1969 because the judge conducted under military pressure Indonesia to Papua became part of Indonesia.

AMP chairman of the Committee of Semarang, Otis majalahselangkah.com Tabuni to say, should happen with the Act of 1969 upheld the decision of each individual nation-Papua, the People Ove One Vote principle, but what happens is deliberation, where the choice Indonesia amounted to 1026 people who serve approximately 800,000 representatives of the Papuan people at the time.

In the release they write 3 demands action. Among other things, first, the Act of 1969 was democratic and the title immediately referendum for the people of Papua.

Two, calling draw Indonesian Military (TNI-Police) Organic and Non-Organic from across Papua to stop all forms of crimes against humanity by the Indonesian state against the people of Papua.

Third, menuntup and stop the exploitation of all the company's activities Multy National Corporation (MNC) owned Imperialist countries; Freeport, BP, Tangguh LNG, Medco, Corindo and others from throughout the Land of Papua.

And lastly, it provides freedom for Papuans demand for self-determination and democratic solution for the people of Papua.

In Yogyakarta, hundreds of Yogyakarta city committee AMP mass re-blocked by hundreds of personnel of the combined police, Brimob complete with their attributes, together with community organizations that claim messenger named FKPM Hamengkubuwono X of Yogyakarta Sri Sultan mass AMP block in the way of Kusuma State.

Mass action is not allowed to continue their activities to the point of Zero KM, such as sute that have been listed in the notice that has been handed over to the police.

In fact, police with messenger sultan together again barred the way. There is a total of about 12 trucks and 17 cars Sabhara patrol police and Brimob collaborate stop a peaceful demonstration AMP Committee Yogyakarta.

It is exactly the same as that occurring in the action of AMP date July 1, 2014, when a proclamation commemorating the independence of West Papua in Victoria, July 1, 1971 first.
While in London, the city committee AMP also down the road. All with the same demands.

Papuan students in the Act requires re-AMP was held for the people of West Papua Act of 1969 because the judge used was not in accordance with international law, full of intimidation and terror. (MB/BT/014/MS)