1) MSG manoeuvres: What next for West Papua?

1) MSG manoeuvres: What next for West Papua?
2) MEDICAL WORKERS TOLD TO IMPROVE SERVICES

1) MSG manoeuvres: What next for West Papua?


It hasn't taken long for the West Papua National Council for Liberation (WPNCL) and other pro-independence groups to to respond to Melanesian Spearhead Group's (MSG) recent announcement on the WPNCL's membership application, made during the MSG summit in Port Moresby. And the response can be characterised as something of a 'good news, bad news' story.
The good news was that the WPNCL, with strong support from Marcus Haluk (Chairman for the Working Group of the all West Papua pro-independence organisations), announced that a conference of reconciliation would be held in Port Vila, Vanuatu at the end of  August.
The aim of this meeting is to put forward an application for membership of the MSG (here's a primer on the Melanesian Spearhead  Group) by an umbrella group of all West Papuan people, as recommended by the MSG leaders in Port Moresby. The conference organisers have expressed their confidence that this new application will be ready by the end of the year.
The conference is being supported by the Vanuatu Council of Churches, the National Council of Chiefs and the government of Vanuatu. The conference chair is Pastor Alain Nafuki, who has already expressed his hope that the government of Indonesia will assist in facilitating the travel of delegates from West Papua to Port Vila. (This may be something of a vain hope as, despite what others may say about the importance of West Papua to Indonesia's 'Look East' policy overall, there is no evidence to suggest that Jakarta will be a willing contributor to a pro-independence convocation being held in another country.)
The bad news is that hard on the heels of this announcement came the news that pro-Indonesia West Papua Autonomy campaigners, Franz Albert Joku and Nicholas Simion Messet, would not be invited to said conference.
This is not surprising, given the longstanding antipathy felt towards pro-Indonesia Melanesians by those who have advocated, lobbied and fought for the independence of West Papua for more than 50 years. However, this decision means the  conference may fail to meet the criteria contained in the Port Moresby communiqué, which states that MSG leaders...

Agreed to invite all groups to form an inclusive and united umbrella group in consultation with Indonesia to work on submitting a fresh application...(Emphasis added.) 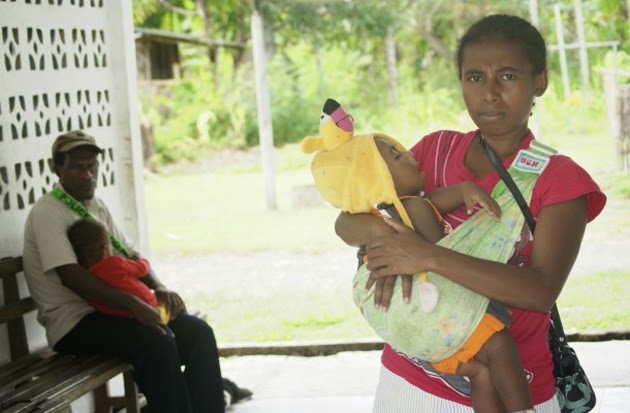 Sentani, 14/7 (Jubi) — Health workers must improve services by going mobile and reaching people in their communities, a Unicef health consultant said.
“The health strategy is now not merely about healing. The conventional or old-fashioned thought is that we should cure the sick first. But the Health Operational Fund (BOK) has changed it. The BOK is a fund devoted for health promotion and prevention,” Yuanita Marini told  tabloidjubi.com on Monday (14/7).
Prevention, rather  than cure has become the basis of providing health services to communities and  the promotion of health is expected to maske people aware of maintaining basic hygiene, she said.
Jayapura Regency health chief Khairul Lie said the current strategy of health services is one step ahead. It’s no longer waits or treats the patients but reach out the people by promoting the health and introducing the early prevention through BOK.(Jubi/Albert/rom)
--------------------------------------------------------------------------------------------------
http://www.thejakartapost.com/news/2014/07/16/papua-police-chief-tito-promoted-national-hq.html
3) Papua police chief Tito  promoted to national HQ
Yuliasri Perdani, The Jakarta Post, Jakarta | National | Wed, July 16 2014, 9:36 AM
Papua Police chief Insp. Gen. Tito Karnavian, who is known for his extensive experience in counter-terrorism, has been promoted to general planning and development assistant at the National Police, replacing Insp. Gen. Sulistyo Ishak who will retire.According to a confidential telegram dated July 14, Tito’s post in the Papua Police will be filled by Brig. Gen. Yotje Mende, who currently serves as the head of the National Police’s Staff and Senior Officials Academy (Sespimti).National Police chief Gen. Sutarman will lead the promotion ceremony of Tito and Yotje on Wednesday, according to police spokesman Insp. Gen. Ronny F. Sompie.Before taking the helm of Papua Police, Tito led the National Police’s Densus 88 counterterrorism squad between 2009 and 2010, during which time he played roles in the operations that led to the deaths of terrorist masterminds Azhari and Noordin M. Top.During his two years at the head of the Papua Police, Tito investigated a series of shootings that targeted police and civilians, most of which were allegedly carried out by Papuan separatist organization the Free Papua Movement (OPM).National Police Commission (Kompolnas) member Hamidah Abdurrahman praised Tito’s performance despite such attacks persisting in Indonesia’s easternmost region. “He had some accomplishments in Papua, although not all problems have been resolved. We must understand that Papua has complicated issues,” she said in a telephone interview.On top of the separatism issue, Tito faced the challenge of dividing his attention between two provinces in the region. “Papua should have been handled by two police forces, as the region is divided into two provinces — Papua and West Papua. Considering that Tito was able to handle that huge responsibility, I believe that he deserves the promotion,” she said.Hamidah said the new Papua Police chief must be able to ensure the security and safety of Papua citizens and police officers from the peril of armed separatists and criminals.The new chief must also apply measures to increase the transparency of his officers in the wake of investigations into Chief Brig. Labora Sitorus, a low-ranking officer stationed at Sorong, West Papua, who ran illegal logging and fuel smuggling businesses worth billions of rupiah.In May, the Papua High Court sentenced Labora to eight years in prison. “Tito made some steps to address the Labora case. The new Papua Police chief needs to devise a comprehensive strategy to promote transparency among officers, to ensure that they are not involved in any illegal businesses,” she said. According Indonesia Police Watch (IPW), Labora gave some of his illicit money to 33 officials in the Papua Police and the National Police. So far, the National Police’s crime investigations division, tasked to handle the case, say they have found evidence of the complicity of high-ranking police officials in the case.
---------------------------------------------------------------------