1) Smuggling at RI-PNG border must be stopped

1) Smuggling at RI-PNG border must be stopped

Jakarta (ANTARA News - Stringent measures need to be adopted to stop smuggling activities involving drugs and other items in the border areas between the Indonesian easternmost province of Papua and Papua New Guinea (PNG).Most of the border areas are reportedly vulnerable to international drug trafficking due to shortage of detection equipment.The provinces geographical location provides easy access to drugs via the sea, air, and land transportation routes, and thus, the police and intelligence officials should be directed to intensify early detection of drug distribution networks.Speaking to Antara in Timika, Papua, on Tuesday, the provinces National Narcotics Agency (BNN) spokesman, Senior Commissioner Antonius Kadarmanta, remarked that the border areas are prone to drug smuggling from the neighboring country of PNG.He noted that the Papua province, which is directly adjacent to PNG, is affected by illicit drug trade practices, which need to be jointly addressed."During a meeting of BNN officials with PNG representatives last year in Medan, North Sumatra, we have explained the data on the circulation of illicit drugs from the country into the province of Papua, which is really detrimental to us," Antonius pointed out.He claimed that the border areas between Papua and PNG are becoming a transit haven for illegal drug smugglers, but the government cannot take comprehensive steps due to resource constraints.Antonius stated that the local authority has tried to crack down on drug circulation, but unmonitored entry points near the border with PNG have marred the efforts.He further pointed out that the areas along the border need adequate drug detection equipment and a local anti-narcotic office to drive out possible drug smugglers and dealers from the neighboring country.He also called on the local police to tighten security along the border areas with PNG, which are believed to be used by international drug rings to smuggle narcotics across the border to Indonesias province of Papua.According to the PNG Post-Courier report in May, increasingly more Papua New Guineans are getting involved in the multi-million kina international illegal drug trade with illicit drugs worth millions changing hands, specifically between Asia and the Pacific.The report highlights the fact that the number of Papua New Guineans caught abroad in possession of these illicit drugs was on the rise, with three known cases that are being tried in international courts at present.One of these cases involves Mary Yawari, 40, who is facing life imprisonment or a fine of US$1.19 million after trying to import US$1.87 million worth of methamphetamine into north Queensland in October, last year.Therefore, Antonius Kadarmanta emphasized that the border areas in Papua province need special attention with regard to these issues in order to address them more effectively.He stated that the Papua province has become an easy target for illicit drug trade practices due to the presence of many illegal border crossings for dealers from both countries."Even along the Skow border between Jayapura and Wutung in PNG alone, there are some 8 illegal border crossings, not to mention open access to move drugs through the sea route," Kadarmanta added.He affirmed that besides rampant drug smuggling practices, the number of drug abusers in Papua continues to rise."Therefore, we need support from all parties, government, and private institutions, including other public elements, to fight against the circulation of illicit drugs in Papua," Kadarmanta stated.He noted that the province is in dire need of drug abuse rehab centers because the number of drug users continues to increase, and it has currently reached more than 16 thousand."So far, we have identified some 16,750 cases of drug abuse by users, addicts, and dealers," he stated, adding that the number includes five thousand who are not yet regular users and the rest are drug addicts and traffickers.Kadarmanta described the number as alarming especially as Papua has no rehabilitation facility to treat the addicts.The BNN has tried to tackle the problem by launching social awareness programs in various places such as schools and other public places to warn the people against the dangers of using drugs, he added.Kadarmanta called for cooperation from all government agencies and community groups to jointly fight drug trafficking in Papua. He explained that marijuana is the main type of narcotic used in the region and smuggled in from PNG. According to Cenderawasi Military Commander Mayor General Christian Zebua, his office will provide metal detector to the military personnel securing the RI-PNG border gate in Skow, Jayapura district.He stated that the detector will be handed over to the Battalion 632 that secures the border, and the TNI will also train several soldiers from the battalion to operate the detector to detect illegal smuggling of ammunition and weapons that contain metal."The detector will assist in the inspection of weapons and ammunition through the legal process at the border gate," Zebua emphasized.According to the commander, the Indonesian Military and Police are working in tandem to prevent the smuggling of weapons to the Papua region, particularly to areas, which are prone to armed rebel groups."We hope that the detector can prevent the smuggling of weapons by civilians as its effects can be very dangerous," Zebua added.Meanwhile, Papua Regional Police Chief Inspector General Tito Karnavian recently stated in Jayapura that the detector will be installed at the Skow-Wutung entry gate."We will propose the placement of detector devices at the gate to monitor the entry of undesired things such as fire arms and ammunition from PNG into the province," Karnavian affirmed.He noted that the proposal needed to be soon realized because the police had learned from the investigation of three residents suspected to be members of an armed group that they had purchased arms and ammunition from PNG.The arms and ammunition were brought into Indonesia in phases using the legal channel through the entry gate of the two nations, Tito said. (O001/INE/A014)
EDITED BY INE
(O001/KR-BSR/A014)

Over half a century we've been forced to have an ideology and nationalism Indonesian who never inherited or born by our ancestors. We know, we never entered, let alone participate, in the history of Indonesian Independence proclamation, August 17, 1945. Papuans never existed in the history of the formation of the country called Indonesia. Therefore, it is time for us to be refused! Reject any manipulation and Indonesian colonial hegemony.

We call upon all the people of West Papua to encourage and teach the truth to fellow family history, ethnicity and nation that the nation of Papua has its own history without Indonesian independence. Thus, the people no longer instigated, fooled, or bribed to engage continuously in celebration of independence August 17.

It's time we show the true history of the Indonesian colonial rulers and the nations of the world that the people of Papua are ready for their own state, based on his own ideology and nationalism. The rejection of Indonesian colonial occupation and subjugation of all practices have to do with the attitude of non-violent boycott.

---------------------------------------------------------------
http://www.thejakartapost.com/news/2014/07/19/police-take-stern-action-against-armed-groups.html
3) Police take stern action  against armed groups
The Jakarta Post, Jayapura | Archipelago | Sat, July 19 2014, 8:39 AM
Newly appointed Papua Police chief Yotje Mende said he would take stern action against armed criminals in the province because their actions threaten the stability of the nation-state.
“We will always adhere to our unitary state and nation. We will act firmly against anyone who undermines security and we will obviously work together with the Indonesian Military (TNI) and provincial administration to stamp out the separatist acts that damage the national structure,” said Yotje in Jakarta on Friday after accepting a report from outgoing Papua Police chief Insp. Gen. Tito Karnavian.
The comments made by Yotje, who was installed as Papua Police chief just three days ago, came on the heels of a series of violent acts carried out by armed civilian groups in Papua in the Tingginambut district, Puncak Jaya and Tiom, Lanny Jaya, where two civilians were shot and killed.
The victims in those shootings were Kallo, a public minivan driver from South Sulawesi, who was shot and killed by the assailants in Tingginambut on Wednesday and Nasito, 45, a motorcycle taxi driver, who was shot by a passenger in Dugume village, Tion district in Lanny Jaya regency on Thursday. 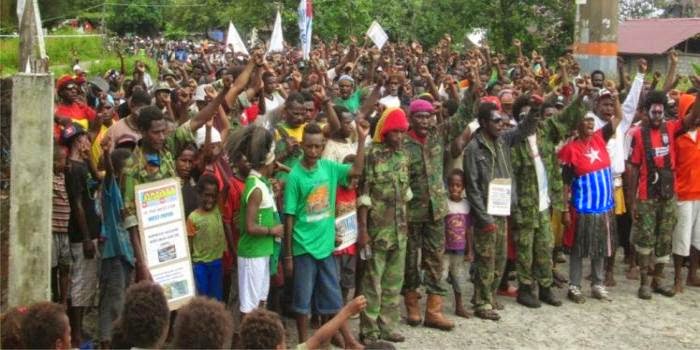 They demanded that the Papua activists detained in a prison (Correctional Institution) in Papua immediate unconditional release and open the democratic space for the people of Papua.

"Morning At 7:00 time Mimika, Papua, thousands of people began to gather in the yard office KNPB Road Culvert Timika. Subsequently, at about 8:00 Wit, mass action began a long march from Jalan Ahmad Yani DPRD Mimika heading to the office with tight security TNI / police armed to the teeth, "said Chairman of the PRD region in Mimika, Abihut Degey to majalahselangkah.com.

The mass of the direction Culvert Timika continue their action to Parliament. Mass action held banners and posters in Mimika DPRD office page. One poster reads, "Referendum for West Papua".

Mass action is received by a number of members of parliament Mimika, Mus Pigay,, Eltimus Mom, Ade Matulessy, and Gerson Wandikmbo. In front of the Parliament, and the PRD KNPB ask the Council to protect the people of Papua.

To mass action, DPRD Mimika represented Mus Pigay said, "whatever aspirations of the people of this place, like a garbage Council Office, where the aspirations of perceived good or bad people, aspirations articulated we received and will be forwarded to the chairman of the parliament to be discussed in The next forum ".

DPRD Mimika also appreciate the peaceful demonstration that was held KNPB and PRD in Timika.

"This movement is a peaceful movement, movement manners, dignified movement, give a round of applause for the PRD and the people of Papua," said Mus Pigai Mimika DPRD members.

Posted by AWPA Sydney News at 1:55 AM