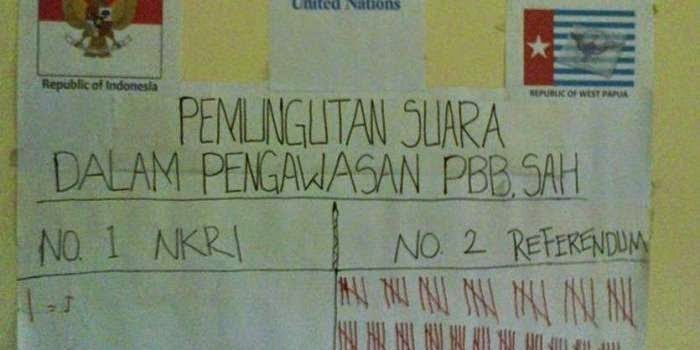 The results of the referendum in the dorm recapitulation Papua Kamasan I Yogyakarta. Photo: Doc. MS. 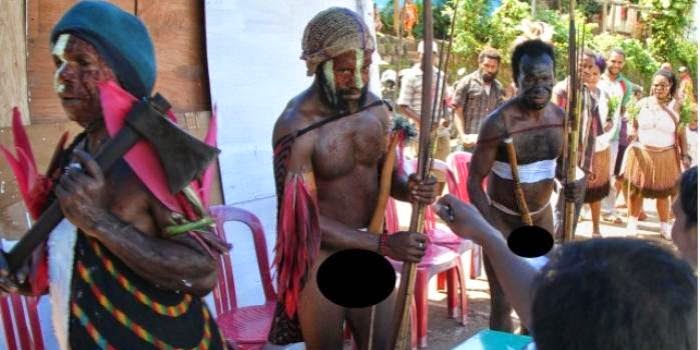 Hundreds of residents when it comes to the polling station to vote in the city of Jayapura. Photo: merdeka.com

But also, he said, is a sign that the people of Papua have successfully conducted presidential boycott stance.

"The people of Papua have declared a boycott, and therefore there is a facilitation group of Papuans to come up with a custom clothing to the polls. Then, said the high participation of national media coverage," he wrote.

In fact, he said, "Almost all local people of West Papua silent and 80% did not vote again, only those migrants migrants piercing, so there is no other way than the military and police had to bribe a handful of Papuans in order to cast a national media coverage."

Mayor Jayapura, Benhur Tommy Mano said, one of them due to lack of socialization General Election Commission (KPU) in presidential elections. Then a lot of people also do not get an invitation.

"Actually, if people do not get an invitation, can show ID. Was all back to the consciousness of each citizen to use their political rights," said Benhur Tommy Mano, by telephone to majalahselangkah.com, Wednesday (07/09/2014).

According to the Mayor, in several meetings with the local Election Commission and the Election Supervisory Committee, it always reminded not to get people in Jayapura who did not accept the invitation. During the meeting, the election authorities have always maintained that preparations are already mature and there will be no obstacles.

He said, the voters list (DPT) in Jayapura about 380 thousand inhabitants. However, more than half did not get a letter of invitation.

Voting Officer at TPS 18 Village Yabansai, Heram District, Eko Budiman said the company does not know for sure many local residents who did not get an invitation.

"For local residents who did not get an invitation, could do the voting at 12.00 CET., But to 13.00 CET, many residents never arrived," he said.

While Chairman Bawaslu Papua, Pastor. Robert Horik contacted majalahselangkah.com said, most Papuans do not get invited voting. One is the delay of the organizers for the invitation to divide C6 or voters.

From direct observation Bawaslu Papua province at one polling station in Tanjung Elmo, Sentani, Jayapura regency until 10:00 CET, many people who have not done voting. In the TPS mounted two loudspeakers to urge residents coblos ballot.

"It is also because of delays in the delivery of C6 organizers to voters. Delays also because there is a budget-level organizers undiluted causing Jayapura their demo to the Election Commission," said Robert.

Meanwhile, some of the people interviewed majalahselangkah.com, say, do not want to give voting rights to the President and Vice President who will sacrifice the people of Papua.

Residents were reluctant to give his name said, still sleepy because dawn watching the World Cup semi-final match between Brazil vs Germany, making him fall asleep.

"Watch the ball until the head is still heavy so advanced sleep first, it briefly night there is also a prestigious match between Netherlands vs. Argentina," said the Argentine team's fans. (Abraham Abeth You / MS)

Denmark has since 2004 supported an Indonesian police academy (JCLEC) where the country's controversial elite unit Detachment 88 is being trained to fight terrorism.
But several human rights organisations claim the unit acts as a death squad in Indonesia's troubled West Papua region, and that it tortures and kills civilians and members of separatist movements.
"Not only are you responsible under these circumstances, in which you support the police, but you are taking part in a crime. If your attitude is so naïve, you can't help anyone," Basil Fernando, a legal advisor at the Asian Human Rights Commission in Hong Kong, told Deadline.
You have no controlNick Chesterfield, a journalist at West Papua Media, claimed Denmark had absolutely no control of where its funds were going.
Between 2004 and 2013, Denmark has granted the police academy a total of 13 million kroner, and the Foreign Ministry plans to extend its support until 2017. Australia is among the other countries that support the police forces.
Denmark stands firmMikael Ekman, Denmark's ambassador in Indonesia, rejects the activists' allegations.
"We made it clear that human rights and the rights of women and children is a priority from a Danish aspect, and that must be acknowledged and valued at JCLEC and the Indonesian police," he said.
Foreign Minister Martin Lidegaard commented that Denmark supports JCLEC to strengthen the police’s knowledge of international rules and conventions and how to translate it into practice.