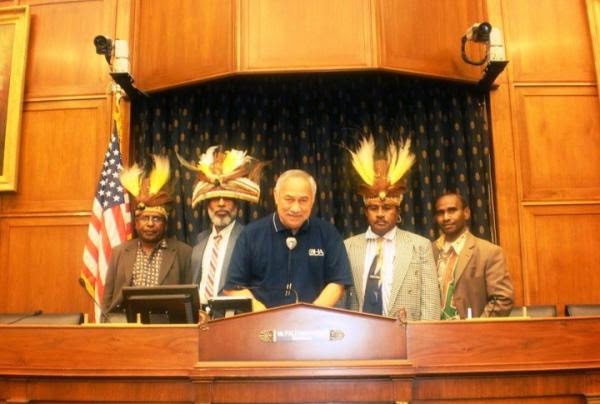 Forkorus Yaboisembut with some Papuan activists when he met members of the U.S. Congress (Photo: Ist)

PAPUAN, Jayapura --- Chairman of the Papuan Customary Council (DAP), Forkorus Yaboisembut with a number of Papuan political activists were arrested after the Third Papuan People's Congress, in October 2011, will be released from prison (LP) Abepura, Papua, on July 21, 2014 .

Head Abepura Correctional Institution, Endang Latitude Hardiman, when confirmed suarapapua.com reporters, Tuesday (15/07/2014) afternoon confirmed the information circulating in the community related to the release Forkorus Yaboisembut Cs.
"The verdict of their three years, but due to getting a mass chunks prisoner remission or three months, so that they will be released on July 21," said Kalapas when confirmed via cell phone this afternoon.
Legal Counsel Forkorus Cs of Sipul Society Coalition For Law Enforcement and Human Rights, Olga Hamadi, when it claims to have confirmed the media get information related to the release of Prison Abepura their clients.
"Our clients get remission twice, ie, at 17 Agusutus 2013 get remission as much as two months, and in December 2013 who received remission of one month, so on July 21, less than three years to come," said Hamadi.
Sekedari known, Forkorus Yaboisembut who served as Chairman of the DAP was arrested after declaring the establishment of the Federal Republic of West Papua (NRFPB) on October 19, 2011, which was also declared himself President NRFPB.
He was arrested along with Edison Waromi elected as Prime Minister NRFPB, also including some committee KRP III, as Selpus Bobii, Dominic Surabut, and August Kraar.
MARY

2) PAPUAN LIBERATION CONFERENCE GROUPS TO BE HELD IN VANUATU 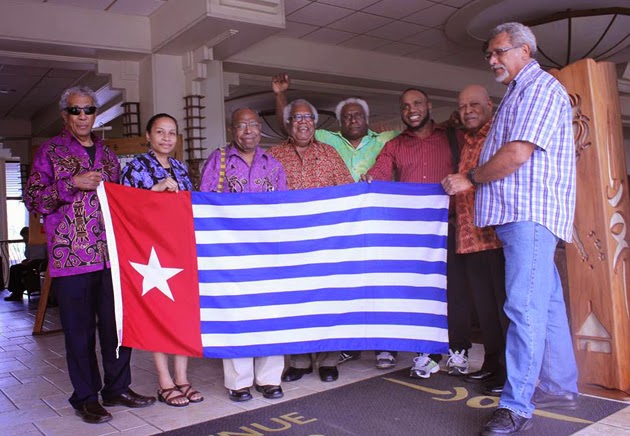 West Papua freedom fighter with Front Liberation of Kanaky (FLNKS) (Jubi)
Jayapura, 15/7 (Jubi) – Pastor Alain Nafuki, members of Vanuatu Church Council has been appointed as the chairman of a committee in organizing the Conference of Papua Liberation Groups which will be held in Port Villa, Vanuatu in August.
“The purpose of this meeting is to facilitate various groups of Papuan Liberation in order to discuss and set West Papua membership application at the Melanesian Spearhead Group,” Pastor Nafuki said via electronic mail received by tabloidjubi.com on Monday afternoon (15/7).
He further said that Vanuatu Church Council and Vanuatu  Government representatives will be involved in organizing this conference which is scheduled to take place on August 27 to 30.
“Some Papuan liberation groups will be invited, but Vanuatu chief (elders) will facilitate the process of Melanesian reconciliation.” he added.
The people of Vanuatu will provide a way for groups to unify. Vanuatu also will serve and assist any unification process if it is necessary, he says.
Andy Ayamiseba, representatives of West Papua National Coalition for Liberation (WPNCL) in Vanuatu justified the reconciliation plan.
“The Government of Vanuatu will invite three major factions, are WPNCL, NRFPB and KNPB / Free West Papua Campaign to form an organization umbrella to submit a new application to MSG.” Andy Ayamiseba told tabloidjubi.com.
At the end of last June, the Melanesian Spearhead Groups (MSG) has rejected the membership application submitted by WPNCL. However at the same time, the leaders of MSG are asking for a new membership application filed by one umbrella organization and carried out in an integrated manner. (Jubi / Victor Mambor/ Tina)