Two Fairfax Media journalists have won awards for their work at the United Nations Association of Australia Media Peace Awards.
Michael Bachelard won the Best Print Feature award for his report, "High tension in Papua and West Papua", published in Fairfax Media's Saturday magazine, Good Weekend
As one of the few western journalists ever allowed in the remote and desperately poor Indonesian region, Bachelard set out to test Indonesian President Joko Widodo's claim that better health, education and economic infrastructure would reduce agitation for a free Papuan state.
The judges congratulated Bachelard for weaving a "complex story that challenges the preconceptions surrounding what occurs in a little known part of our immediate region".
Photojournalist Edwina Pickles won the Best Photojournalism award for her depiction of life at Dadaab, the world's biggest refugee camp. The desert Kenyan settlement is home to more than 350,000 refugees, most of them Somali and more than half under the age of 18.
Pickles' photographs highlighted "the resilience of women and children" living in this harshest of environments, the judges said.
Adam Morton was also awarded a special commendation in the Climate Change Issues category for his report, "The Road to Paris", in The Sunday Age.
In total, seven finalists from Fairfax Media were acknowledged at the awards, which were presented at The Pavilion arts centre in Melbourne on Friday night.
Fairfax Media
—————————————————-
http://tabloidjubi.com/en/2015/10/22/residents-rally-over-shortages-of-food-in-wamena/
2) RESIDENTS RALLY OVER SHORTAGES OF FOOD IN WAMENA
AdminOct 22, 2015Economy0 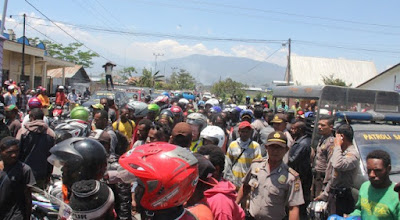