AWPA is urging Julie Bishop to


raise AWPA's concerns about the grave human rights situation in West Papua with the Indonesian Government, the crackdown on peaceful civil society groups, the intimidation of journalists simply doing their job and the tragic killing of civilians including school children by the security forces.

to encourage the Indonesian Government to allow a PIF  fact-finding mission to investigate the human rights situation in the territory.

I am writing to you on behalf of the Australia West Papua Association in Sydney concerning a number of recent incidents in West Papua which raise grave concerns for human rights defenders and peaceful activists trying to bring the ongoing human rights abuses in West Papua to international attention.

On Thursday the 8 October, 18 peaceful activists (6 who were priests) were arrested for holding a peaceful rally in front of a Catholic Church in Abepura, Jayapura.  The Rally was organised by  SKP-HAM  (Solidarity with Victims of Human Rights Violations Papua). The purpose of the rally was to bring attention to the Indonesian authorities that so far nobody has been held accountable for the killing of four students in Paniai on the 8 December 2014 by the security forces.  As the rally progressed a police truck arrived with sirens blaring driving into the demonstrators nearly hitting a number of them.   A large number of police jumped of the truck breaking up the rally and arresting 18 demonstrators.  A number of journalists who were reporting on the rally were intimidated by police and banned from taking photographs. One journalist had his camera stolen (at gunpoint) and the entire contents of photos and videos were deleted.  Although the demonstrators were eventually released, during the arrests the Police acted in a brutal and heavy-handed way.

Other incidents.
Two high school students were shot by the Indonesian security forces in Timika on Monday the 28 September.   Caleb Bagau, aged 18, died while his friend Efrando Sabarofek, aged 17, was wounded in the chest and legs. At approximately 19.00hrs while the students were sitting in a market culvert with their school friends, dozens of police officers armed with weapons and cars surrounded the area.   Because they were afraid the two students ran, however the police shot in their direction killing Caleb Bagau and wounding Elfrando who was shot in the chest and leg.  Another shooting occurred when the local community went to the police station after hearing the news that a student had been shot dead at the water channel. Although the local people were angry with the police,  the police basically refused to listen and responded by firing at them wounding three.

Also on Monday 28th Levi Gebze a 16-year-old West Papuan boy was arrested and tortured by the Indonesian police in Merauke. According to a report received, the incident occurred at at 13:30hrs as Levi was on the way home on the Muli Road. He was suddenly followed by an Avanza car with 4 members of  the Indonesian police/intelligence inside. He was stopped and forced to get inside the car and with no questions asked was beaten by the police. He was then brought to the police station where he was interrogated and tortured again. He was beaten and also electrocuted. The police arrested him under charges of stealing a bag and laptop on the Yobar beach but when he denied the charge the police continued to beat and electrocute him. Levi is still suffering the effects of this brutal torture and there has been no investigation into the actions of the police whatsoever.

We urge you to raise our concerns about the grave human rights situation in West Papua with the Indonesian Government, the crackdown on peaceful civil society groups, the intimidation of journalists simply doing their job and the tragic killing of civilians including school children by the security forces.

We note that in the Communiqué from the 46th Pacific Islands Forum meeting in Port Moresby, that the PIF Leaders requested the Forum Chair to consult on a PIF fact-finding mission to West Papua to discuss the situation in Papua with the parties involved. WE urge you to encourage the Indonesian Government to allow such a fact-finding mission to investigate the human rights situation in the territory. 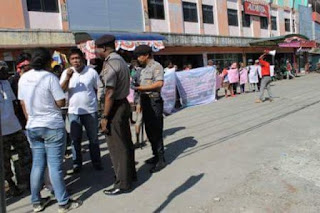 Mass action when negotiating with the police (Photo: Ist) 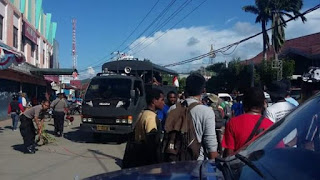 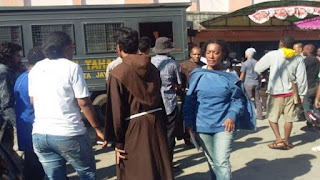 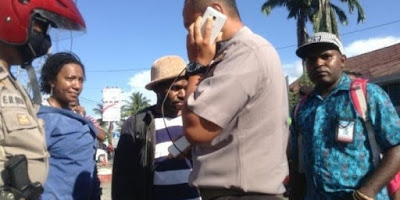 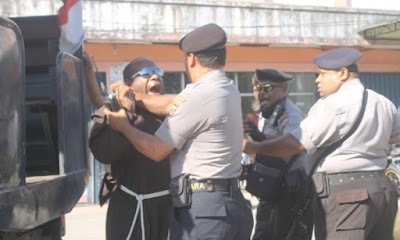 (FromTabloidjubi) One Catholic monk of the Franciscan Province of Papua, 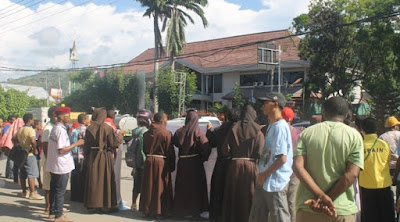