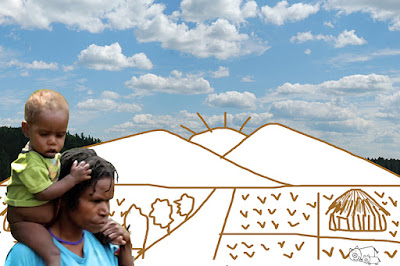 The poster for the documentary 'Tanah Mama,' which was released in January this year. (Photo courtesy of Kalyana Shira Films)
By : Jakarta Globe | on 3:40 PM October 28, 2015
Jakarta. An Indonesian documentary maker has withdrawn her film from the government-funded Melanesian Cultural Festival this week, calling it a “political program” that diverts focus from the real issues facing repressed communities in the country’s impoverished east.
Asrida Elisabeth, whose hour-long documentary “Tanah Mama” (“Mama’s Soil”) was released at the start of the year, said she had raised her objections with the Kalyana Shira Foundation, which funded her project, and they agreed to pull the documentary from screening at the festival in Kupang, East Nusa Tenggara.
Indonesia is hosting the festival this week supposedly as a celebration of the Melanesian people and culture, following its inclusion in June as an “associate member” of the Melanesian Spearhead group, comprising the western Pacific nations of

Papua New Guinea, Fiji, Vanuatu and the Solomon Islands.
Also a full member, but not a recognized state, is an opposition coalition from the French territory of New Caledonia. Jakarta’s inclusion as an associate came at the expense of West Papuan separatists whose own bid for membership was sidelined thanks in part to lobbying by Foreign Minister Retno L.P. Marsudi.
Asrida said that in light of these developments, she felt the festival was more of a “political and diplomatic program” by the Indonesian government than a cultural celebration, warning that it could “trigger danger identity politics in Papua and elsewhere in eastern Indonesia.”

Papua has for decades been wracked by a low-level insurgency against Jakarta’s rule. A similar struggle on a smaller scale also continues to simmer in the Malukus, which Jakarta claims is part of the wider Melanesian sphere.
“The people of Papua can see that this [festival] is an attempt at diversion amid efforts to build solidarity in the Pacific region, where the Melanesian identity is the basis for the struggle for respect, protection and empowerment of the Papuan people,” Asrida said. “For the people of East Nusa Tenggara, Maluku and North Maluku, the Melanesian ‘identity’ has simply been thrust upon them by the state.
“I don’t want my film to be used to complicate this issue, and I don’t want it to be screened as though it represents Papua,” she added, saying that community groups in Papua had also objected to the planned showing of the film at the festival.
Asrida said her documentary, which chronicles the suffering of a Papuan woman as she struggles to take care of her four children amid grinding rural poverty, was a message to the Indonesian government to focus on the political, economic, social and cultural problems in Papua.
“In this context, to use the film ‘Tanah Mama’ for the purposes of Melanesian diplomacy would be inappropriate,” she said.