2) Indonesia says Papuans can benefit from more competition
3) Papuans in Seven Indigenous Territories to Welcome PIF Team
4) Muslim and Christian faiths co-exist, says Papua Reverend
5) One year on, Indonesians disappointed with President Jokowi
6) NZ students protest over Papua violence
7) Rallies Serve as Reminder to Police, Jayapura Bishop Says
8) Some Students at SMPN Buti Cannot Read or Write
9) Most Teachers in Mountainous Areas Lack Certification
10) 4 High School Students in Jayapura City Unable to Read Properly
11) Hot spots increase in Papua,  South Sumatra
—————————————————————————————————-
HTTP://EN.TEMPO.CO/READ/NEWS/2015/10/21/056711586/INDONESIA-PAPUA-NEW-GUINEA-OIL-AND-GAS-COLLABORATION
WEDNESDAY, 21 OCTOBER, 2015 | 12:10 WIB
1) Indonesia-Papua New Guinea Oil and Gas Collaboration
TEMPO.CO, Jakarta-The Indonesian government is planning to cooperate with Papua New Guinea to develop the national oil and gas sector in Eastern Indonesia.  The Energy and Mineral Resource Ministry has launched a shift of focus on exploration and exploitation of oil and gas activities within the vicinity.
“Private sectors also have the opportunity to take advantage of this cooperation,” said Director General of Oil and Gas, I Gusti Nyoman Wiratmadja as cited by the Ministry of Energy and Mineral Resource on Wednesday, October 21.
The collaboration will be done through the information exchange of oil and gas policy of the two countries, feasibility of study and survey as well as in the policy management for liquid natural gas.  These activities will be supervised by the newly formed Indonesia-Papua New Guinea oil and gas task force.
The task force, Wiratmadja said, is the implementation from the MoU created in 2013.  For the long term, Wiratmadja expects the collaboration will be included in a more realistic agreement.
Wiratmadja uttered that related State-Owned Enterprises (SOEs) including PT Pertamina and PT Pupuk Indonesia also have the chance to rake the advantages from the collaboration.  The fertilizer factory will also be incorporated in the development plan within Eastern Indonesia’s border.
In the presentation, Wiratmaja conveyed that Papua New Guinea owns hefty oil and gas and mineral contents.  Unfortunately, little could only be explored.  “Indonesia has been focusing on the western region,” he said.
ROBBY IRFANY
——————————————————————————
http://www.radionz.co.nz/international/pacific-news/287632/indonesia-says-papuans-can-benefit-from-more-competition
2) Indonesia says Papuans can benefit from more competition
Updated at 4:30 pm today 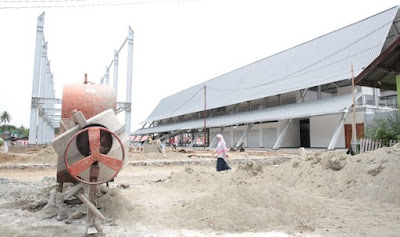 The new Pharaa Market under construction in Sentani, Papua
Photo: RNZI/Koroi Hawkins
An Indonesian government representative on development in Papua says the region's indigenous communities can benefit from learning more about trade, rather than just bartering.
Judith Dipodiputro is overseeing the construction of a major new market facility for Papuans to sell homegrown and fresh products in Sentani.
It is the latest in Jakarta's efforts to foster grassroots involvement in development in Papua.
Many Papuans complain that Indonesia's transmigration programme over the years has left them as bystanders to in economic activity while non-Papuans dominate.
Ms Dipodiputro says there is a need for Papuan communities to learn to be competitive.
Some tribes as very competitive, are traders, since hundreds of years. Some tribes are not really traders, they are more - let's say - living on a day by day, so they don't really have his concept of competing in trade. But we have to work on creating a balance, of bringing them into a competitive level that is acceptable to them as well.
——————————————————————————————————-
http://tabloidjubi.com/en/2015/10/19/papuans-in-seven-indigenous-territories-to-welcome-pif-team/
3) Papuans in Seven Indigenous Territories to Welcome PIF Team
POSTED BY: ADMIN OCTOBER 19, 2015
Jayapura, Jubi – Native Papuans in seven indigenous territories will welcome the arrival of a fact-finding team from the Pacific Island Forum (PIF) to investigate human rights violations in Papua.
The spokesman of the United Liberation Movement for West Papua (ULMWP), Edison Waromi said it is important because PIF investigation team will investigate all the problems that occurred in Papua.
“We hope tribal leaders in seven indigenous territories will welcome it,” said Edison Waromi in celebration of the success of the delegation ULMWP won the issue of West Papua in the PIF to the issue of West Papua becoming an official speech in the annual meeting at the United Nations this year in Waena, Heram district, Jayapura city on last week.
While one member of the working team of ULMWP, Markus Haluk said that the need for readiness of the Papuan people to present data and facts about human rights violations since 1961 in Papua.“Newspaper clippings from 1965 has, or the data that we have, are prepared. We show them,” said former General Secretary of AMPTPI.
“We want to tell that we are not silent. We continue to fight until ULMWP get its status as an observer in MSG and PIF will come to for conduct the investigation and we will welcome this, “he said again.
Mama Yosepha Alomang, who received Yap Thiam Hien Award in recognition of her achievement in Defensing Human Rights said, it’s time for Papua to be free from slavery in Indonesia.“Young people must unite and fight peacefully without violence. We must join together,” she added. (Mawel/Abeth You)
————————————————————————————-
http://www.radionz.co.nz/international/pacific-news/287616/muslim-and-christian-faiths-co-exist,-says-papua-reverend
4) Muslim and Christian faiths co-exist, says Papua Reverend
Updated at 2:52 pm today
A Papua church leader says media reports about the recent burning of a small mosque in Tolikara have largely mis-represented relations between different faiths.
Reverend Dormon Wandikbo, is a leading member of GIDI, or Gereja Injili di Indonesia, a Protestant church which, unlike other leading Protestant churches in Papua, has a presence in other parts of Indonesia.
Reverend Wandikbo was in Jayapura this month to meet with representatives of the GIDI church from Jakarta to foster economic empowerment by members of their church.
He says the Tolikara incident was not a conflict between Muslims and GIDI Christians as reported by mainstream media.
Because Muslims and GIDI people there, they don't know what happened there. There's another people who created the conflict. Because we know during twenty years, nothing happened there. But last incident, in July, it happened and we know that it was created by other people there.
Reverend Wandikbo says the two faiths generally co-exist well in Papua.
He adds that two teenagers arrested for the incident should be freed.
Meanwhile, he admits that the Papua region does have isolated cases of religious extremism which had the potential to cause problems for society.
——————————————————————————————-
http://www.english.rfi.fr/asia-pacific/20151020-one-year-president-jokowi-seems-have-disapointed-many-indonesians
INDONESIA -

5) One year on, Indonesians disappointed with President Jokowi

By Clea Broadhurst
One year on, Joko Widodo has disappointed electors, who expected a hands-on approach from a progressive president, particularly in tackling rampant corruption and boosting the economy.

POSTED BY: ADMIN OCTOBER 18, 2015
Jayapura, Jubi – The head of School and Vocational Education Office of Jayapura, Nurhadi, said that four of tenth grade students of senior high school in Jayapura city could not read properly.
“Based on information given by Papua Legislative Council, there are ten, but I found four of them who cannot read properly at the schools, the three of them are students of SMAN 3 which is one of the best school in Papua and one is a student of SMA 6 Skouw Muaratami,” said Nurhadi to Jubi on last week.
It was found that these students graduated from outside Jayapura city. Therefore, a team from education department and teachers conduct intensive reading class for them.“All three of these students were selected from chosen junior high school outside Jayapura city. We will not quit them,” he said.
Meanwhile, the other student graduated from junior high school located at border.“We will also give attention particularly by preparing learning strategy at the border area welll,” he added.
For other schools, Nurhadi acknowledged, he has not received the report, yet he will continue to check it“I have done some investigation for schools that accepted students from outside the region such as SMA Taruna Bhakti and but no reports from the principal,” he said.
Earlier, secretary of commission V of Papua Legislative Council on Education and Health, Nason Uti felt sad with the information.“If the information is correct, we regret it happened. Moreover, if there is a student graduated from junior high school in this city, “said Nason on Tuesday (09/29/2015).
According to him, the regions such as Jayapura city, Jayapura regency, Nabire, Mimika, Jayawijaya, and Merauke become a barometer of education in preparing the Human Resources (HR) in Papua.
“Teachers should not be messing around. They should be able to create quality human resources. This country needs a leader who has the capacity that can compete at international level. If there are high school students can not read, then finding the cause,” he said. (Sindung Sukoco/ Tina)
——————————————————————
http://www.thejakartapost.com/news/2015/10/21/hot-spots-increase-papua-south-sumatra.html
11) Hot spots increase in Papua,  South Sumatra
thejakartapost.com, Jakarta | National | Wed, October 21 2015, 12:18 PM -
Several flights at Moses Kilangin Airport in Timika, Mimika regency, Papua, were canceled on Wednesday morning because as a thick haze from nearby fires brought visibility down to around 1 kilometer.
According to Timika meteorology station spokesperson Dwi Christanto, the region's cool weather has kept the haze from dissipating, leaving it to blanket the airport instead.
"Weather conditions in Timika will improve if the number of hot spots in Merauke regency are reduced and firefighting is maximized," said Dwi on Wednesday as quoted by Antara news agency.
Since Oct. 15, the airport has been unable to serve wide-body aircraft such as those from Garuda Indonesia, Sriwijaya Air and Airfast Indonesia.
On Tuesday, 257 hot spots were detected by NASA’s Terra and Aqua satellites in Papua and Maluku, up from 229 the previous day. Yos Sudarso Island in Merauke regency and the border area between Merauke and Mappi regencies were said to have the most hot spots.
Meanwhile, the number of hot spots in South Sumatra has also increased, rising to 530 on Wednesday, spread across 16 regencies and cities. This increase comes despite the area having been the focus of foreign aid as requested by President Joko "Jokowi" Widodo. Two days ago, there were only 163 hot spots in South Sumatra.
"The number of hot spots detected in South Sumatra in October has been fluctuating. It will decrease for a few days, but the next day drastically increase, just like today," said spokesperson for the Meteorology, Climatology and Geophysics Agency (BMKG) South Sumatra, Indra Purnama.
Ogan Komering Ilir regency is home to most of South Sumatra’s hot spots, with 356, followed by Musi Rawas with 50 hot spots, Musi Banyuasin with 35, Banyuasin with 34, Lahat with 13, North Musi Rawas with 11 and Ogan Komering Ulu with 10. (kes)(++++)
————————————————————-
Posted by AWPA Sydney News at 12:09 AM