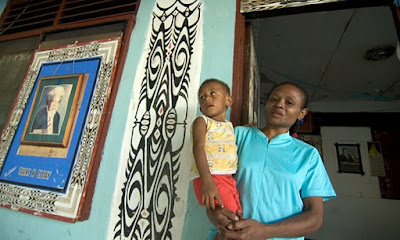 A woman in Jayapura, West Papua, holds the grandchild of the murdered independence leader Theys Eluay,
who is seen in the portrait to her right. Photograph: Idealink Photography/Alamy
West Papuans have struggled for their freedom since they were annexed by Indonesia and robbed of their right to a fair referendum in 1969. While the independence struggle slowly gains more visibility due to a courageous network of civilian journalists on the ground, it is the stories and struggles of West Papuan women that are often silenced.