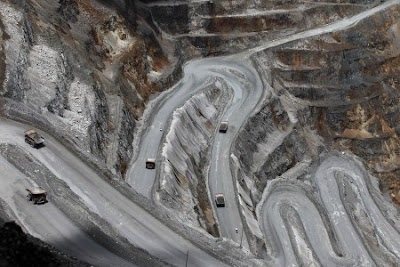 Freeport wants certainty to spend $18 billion to build what would be the world’s biggest underground mine. But under law the government cannot begin to renegotiate until 2019, two years before the contract expires. (Antara Photo/Muhammad Adimaja)

Jakarta. Indonesian ministers are battling over control of U.S. mining giant Freeport-McMoRan’s future in the country, threatening to mar the president’s first trip to the United States later this month.
President Joko Widodo starts a five-day trip to Washington and San Francisco on Oct. 25, as investor sentiment in Southeast Asia’s largest economy brightens following a cabinet reshuffle and a series of new stimulus measures.
One of Widodo’s first stops will be with Freeport executives at a breakfast ahead of his meeting with U.S. President Barack Obama, according to a tentative schedule obtained by Reuters.
At the heart of talks will likely be Freeport’s years-long bid to renew its contract, allowing the firm to continue operating beyond 2021 at the lucrative Grasberg mine in Papua, one of the world’s biggest deposits of gold and copper.
Freeport wants certainty to spend $18 billion to build what would be the world’s biggest underground mine. But under law the government cannot begin to renegotiate until 2019, two years before the contract expires.

A mines ministry official said this month the rules were being revised, possibly allowing companies to propose an extension earlier.
Mines minister Sudirman Said assured Freeport in a letter last week that the government would “promptly” approve a contract extension once it completes the process later this year.
“For the government, it is better to make a decision instead of delaying the problem. If it’s postponed, it will burden the government,” Said Didu, the minister’s senior adviser, told reporters when asked about Freeport’s contract extension.
But Said’s boss, chief natural resources minister Rizal Ramli, and security czar Luhut Pandjaitan have sharply criticized Freeport’s 48-history in Indonesia and say a contract extension will not be decided for at least another four years.
“We have a regulation ... 2019, two years before the contract expires,” Pandjaitan told Reuters late Thursday. “We cannot change our regulation just because of Freeport.”

The mines ministry has dismissed statements from the two senior ministers on the issue, saying they do not have the authority to decide on such matters.
Didu said the mines ministry has Widodo’s support to extend the company’s contract as quickly as possible.
“The president doesn’t want many parties involved in this negotiation with Freeport because, based on experience, many parties have political and business interests.”
But when reporters asked the president on Friday to provide some clarity, Widodo said: “The extension can be done two years before the end of the contract, it means 2019.”
Freeport officials were not immediately available to comment.
Additional Reporting by Hidayat Setiaji and Kanupriya Kapoor