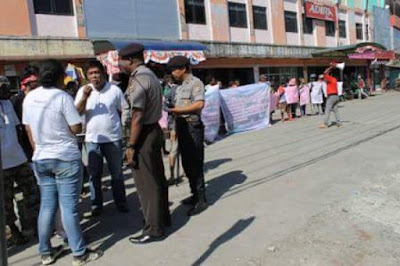 Mass action when negotiating with the police (Photo: Ist)

JAYAPURA, SUARAPAPUA.com --- City Police Officers (Police) Jayapura seize reporter's camera and delete the entire contents of the photo, when disperse a peaceful demonstration held Solidarity with Victims of Human Rights Violations (SKP HAM) Papua, Thursday (8/10 / 2015) this afternoon.
Suarapapua.com watchlist, approximately at 14:40 CEST, when the mass action and negotiations are being held in Abepura police chief, suddenly from the direction Circle Abepura, emerging one police trucks with sirens were very strong, and pushed into the ranks of the masses and forcibly dismiss the action.

Some Brother and Pastor are seen holding posters and banners was almost hit by a truck police; Dozens of members of the police in a swift jump from the truck and disperse the mob action, and arrested dozens of students, Brother-brothers, and transported to the police truck.

Indiscriminately, some of the journalists who were in the place of action and trying to take photos too intimidated by police and banned from taking photographs of the dissolution of the action by the police.
Several police then approached Abeth You, journalists majalahselangkah.com, and gunpoint and stole his camera and roughly delete the entire contents of the photos and videos were taken.
You since the beginning has tried to show a press card, and stated that he was a journalist, and was covering the action, but the police officers ignored, even three members of the police tried to transport you into the police truck parked not far from where the action.
"When the Brothers beaten and will be transported into the truck, I attempted taking photographs from the side, suddenly some officials approached me and confiscated my camera used to photograph, but I have to show a press card," said You.
According to You, it is not transported into the truck because some reporters approached the police and declared himself a journalist, and is being run reporting tasks.
"I have spoken directly to Wakapolresta Jayapura, Commissioner Albertus Adreana and Abepura police chief Commissioner Marthen Asmuruf, but the police seem no attention to my voice, and kept trying to delete the entire contents of the picture," said You.
See the behavior of the police, co-Abeth You are in place for direct action called Papua Police Chief, Inspector General Paul Waterpauw, and hold his men.
"I'm sorry for this incident, I hope my friends can report the action to the members of the Papua police Propam that the report can be processed," said Waterpauw, when contacted by reporters.
According Waterpauw, he also has spoken directly to Jayapura Wakapolresta the lead in the field, in order to apologize to the reporter on the treatment.
"I've asked Wakapolresta apologize to journalist friends to this act," he said.
Meanwhile, Victor Mambor, one expert certificate holder press the Press Council said that such a practice is common in Papua indigenous journalists.
During this time, said Mambor, if Papuans journalists covering the demo, always regarded as demonstrators and treated harshly, even when identity cards of their journalism.
"It's discrimination. Police is the law enforcement officers. But really do not know the law? "Asked Mambor as written tabloidjubi.com.
According Mambor, Basic Press Law of 1999 Article 4 paragraph three clearly states "To ensure the independence of the press, the national press has the right to seek, obtain, and disseminate ideas and information".
"And article 8, paragraph 1 reads: Any person who unlawfully intentionally perform actions that result in delay or impede the implementation of the provisions of Article 4 paragraph (2) and (3) shall be punished with imprisonment of 2 (two) years or fine Rp. 500,000,000.00 (five hundred million rupiah), "added Mambor.
According to him, the police should be more professional in handling mass demonstrations. Do not disperse as good heart, persecuting and arresting people.
"In this case, the police are the ones who knowingly perform actions that result impede or obstruct the practice of journalism. That law enforcement should know the law, "he repeated again.
Separately, Wakapolresta Jayapura, Commissioner Albertus Andreana, convey permohongan apology to reporters on his child's behavior in the field.
"We apologize to journalist friends for the actions of my members in the field, but of course since there is cause and effect," he said.
Oktovianus POGAU

Coordinating Maritime Affairs Minister Rizal Ramli dished out a sharp critique once more, and this time it was directed against foreign companies controlling Indonesia's mineral wealth. For example, the gold mine controlled by giant gold and copper miner Freeport in Papua. He also lambasted the mentality of the country’s state officials in the mineral sector.
Rizal said Indonesia was blessed with abundant mineral resources such as copper, gold, coal, nickel and tin. Unfortunately, all of those resources, except coal, are controlled by foreign powers through a work contract.
The minister said a mining site currently controlled by PT Freeport Indonesia, a subsidiary of US-based mining giant Freeport – McMoRan Inc., in Papua was one of the three biggest copper and gold mines in the world.
“However, people in Papua are very poor because Freeport pays only 1 percent in royalties for the gold it exploits. Across the world, gold royalties are around 6-7 percent,” Rizal said as quoted by tempo.co in his remarks during a general lecture to celebrate the 57th anniversary of the Jayabaya University in Jakarta on Thursday.
The minister said gold and copper reserves in the mine currently controlled by Freeport could be exploited for the next 30-40 years. Meanwhile, the company’s contract would expire within the next 5 to 10 years.
“There is now a chance for our country to be able to repeat our previous history, during which our mineral resources gave much benefit to all Indonesian people and the nation,” said Rizal.
Based on existing laws, he said, a contract could be renegotiated only 2 or 3 years before it expired. However, there were state officials who wanted Freeport’s contract to be renegotiated 10 years before it expired.
“They don’t understand negotiation techniques. We have to understand that the closer we get to the expiry of a contract, the bigger our bargaining position is. So, we can push forward much better contract terms for this nation,” said Rizal.
The minister also criticized Freeport’s poor environmental management, saying it threw mining waste, which contained mercury, into rivers in the surrounding areas, damaging the ecosystem.
Rizal said if Freeport implemented good corporate governance, it would not be that difficult for the company to handle mining waste, preventing it from polluting the environment.
“But because it [Freeport] is greedy, it doesn't want to pay compensation to victims of environmental damage. Our weak law enforcement has aggravated the situation. Ironically, in its home country, any company found guilty of damaging the environment, such as the incident that happened in the Gulf of Mexico, must pay billions of dollars in fines,” said Rizal. (ags/ebf)
————————————————————————-

POSTED BY: ADMIN OCTOBER 8, 2015
Jayapura, Jubi – “Conflict should not be equated with violence. A conflict occurs when there are differences in needs or interests, whether it was in small or large scales. The conflict management conflict will allow us to find the solution,” said a resource person of Papua Openness for Foreign Journalist Seminar, Jimmy Deminianus Ijie at Grand Abe Hotel, Jayapura City on Tuesday (06/10/2015).
“When the president opened the access for foreign journalist in Papua just like other provinces in Indonesia. The decision was not apart of the awareness to build mutual trust that should be started from the openness. Peace can not be existed if all parties are still infected by mutual suspicion,” he said.
According to him, the opening access for foreign journalist has doubted the electivity to close the access for mass media in today’s sophisticated multimedia.
“The president’s policy is right, because prohibiting the foreign journalist to come to Papua would raise an impression that the government cover the current issues occurred in Papua,” he said.
In mid of May 2015 when visiting Papua, the President Jokowi said he will open free access to foreign journalist to do coverage in Papua. On that occasion, the president explained it’s important to think positive in building a trust that has been missing for long time.
Earlier, the Chairman of AJI Kota Jayapura, Victor Mambor, said it’s important to open access to foreign journalist to Papua to avoid misinterpretation about Papua. Mambor gave this statement in the interview with AJI Indonesia in Jakarta in the World Press Freedom Day 2015 some times ago. He explained currently media in Papua is still growing, as well as its challenges, such as human resources, ethic to journalist positioning. In Papua, as the media is growing, the number of journalist is also increased.
“But those who are professional in skill and ethic could be said not growing in parallel. About the challenges, there’s no significant different. Journalist is still facing the terror of violence similar with what had happened in the early years,” he said. (Roy Ratumakin/rom)
——————————————————————-

Jayapura, Jubi – Many residents in Intan Jaya were disappointed with poor health care service at public clinics.
Locals said they did not receive appropriate services in a timely manner and had to put up with long lines.
Facilities are poor and there are too few health workers, they said.
“Because there’s a shortage of facilities and medical personnel in Intan Jaya, many patients who come and go home disappointed because queuing up long, “chairman of Intan Jaya Student Association, Melianus Duwitau said in Abepura, Jayapura on Tuesday (06/10/2015).
He further said patients are then referred to outside Intan Jaya like Timika and Nabire and use their own money. Yet, for patients who are unable, finally treated in Intan Jaya.
Yanuarius Lagowan, General Secretary of Central Mountain Student Association in Indonesia said the condition of health care in the regency is very worrying.
He said he hoped the government will give serious attention to this case. (Mawel Benny/Tina)
————————————————————————————————
Posted by AWPA Sydney News at 1:36 PM