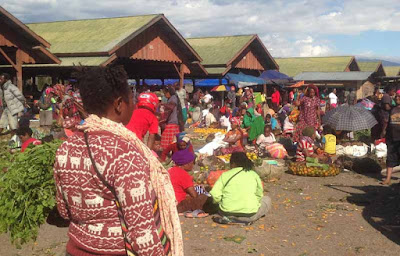 Jigibama rraditional market in Wamena, Jayawijaya District – Jubi
Jayapura, Jubi – “We have our vegetable garden, but if it has not yet ready to be harvested, we must go to Youtefa market every 3 am to buy some vegetables and take it home. Then at 3 pm we bring it to the market for reselling,” Yuliana Pigai told BeritaBenar at temporary traditional market for Papuan women entrepreneurs. Mama Yuli, as she is often called by her colleagues at Papua Traditional Market, said after buying some vegetables at Youteva market, she will do other domestic works and then go to her vegetable garden. She will take care of her plantation until 12 pm. Then she will go home and prepare going to the market for selling vegetables. While other Papuan women who sell local commodities at Temporary Traditional Market for Papuan Women said they only get a few for daily income. “We can earn between a hundred to three hundred thousand rupiahs everyday, but everyday we need about 150 thousand rupiahs or more. We all know that the living cost in Papua is the most expensive,” said a woman trader Hermina Hubi. Backbone of the Family and Papua Economy Most of these tough women are married. But some had abandoned by their husbands and should bear the family’s burden alone. Some are married to the husbands who have no regular job or work as civil servant, but none of those husbands gave their income to the wives. “If they got paid, they never gave us their salary. We don’t know what do they do with it. If we are not selling vegetables at the market, who’s going to pay our children’s school fee? Who’s going to feed our children?” said Mama Hermina whose husband works as civil servant at the Papua Governor Office. She further admitted the Temporary Traditional Market for Papua Women is the only place she could access since in other market places she must compete with non-Papuan traders and certainly defeated. She also cannot trade at a town street of Jayapura City because it’s already full with other traders.