Prime Minister Manasseh Sogavare has called on the Geneva-based United Nations Human Rights Council to do more in investigating and monitoring allegations of human rights abuse and violations in the Papua and West Papua regions of Indonesia.
Sogavare made the call in New York Thursday in his address at the 70th Session of the United Nations General Assembly."All states have a legal duty and moral responsibility to uphold, respect and promote human rights and where necessary take preventive, protective and punitive measures against human rights abuses or violations in accordance with the UN Charter and applicable international laws,” Sogavare said.“Against the foregoing backdrop, the General Assembly is well aware of the continuing concerns of human rights violations in the Papua and West Papua regions of Indonesia and Solomon Islands further calls on the Geneva based Human Rights Council to do more in investigating and monitoring of allegations of human rights abuse and violence on the ethnic Melanesians there."We (Solomon Islands) would like this issue attended to in a timely manner," he added.Prime Minister Sogavare said Solomon Islands together with the Pacific Islands Forum are seeking genuine dialogue and cooperation with Indonesia to resolve and dissolve the reported allegations of human rights violations.He said the Pacific Islands Forum Leaders in their recent 'Leaders Summit' in Port Moresby approved the deployment of a fact finding Mission to West Papua to establish the alleged abuse of human rights there.He said the summit resolved to appeal to the Government of Indonesia to allow free and unrestricted access to this mission 'in the true spirit of regional cooperation.'Prime Minister Sogavare added that, "In the long term however, the United Nations cannot shy away from the root causes of these violations."
—————————————————————
http://tabloidjubi.com/en/2015/10/03/regional-leaders-urge-jokowi-to-evaluate-security-measures-in-papua/
2) Regional Leaders Urge Jokowi to Evaluate Security Measures in Papua
POSTED BY: ADMIN OCTOBER 3, 2015 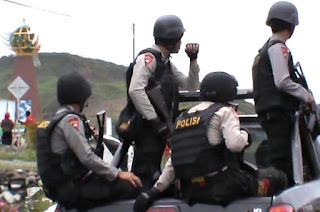 POSTED BY: ADMIN OCTOBER 2, 2015
Wamena, Jubi – Wamena, the capital of Jayawijaya Regency, have experienced a shortage of fuel, cement and flour for the last four days.
The shortage came after airlines reduced flights as their fleets were undergoing maintenance, source said. Trigana Air, Cardig Air, Jayawijaya Dirgantara and Deraya operate an aircraft each for transporting the gasoline into that area. The airlines normally operate two aircraft each.
Sources told Jubi in Wamena on Tuesday (30/9/2015) that the aircraft only transported rice for poor (raskin).
Currently the Jayawijaya Industry, Trade and Cooperation Office conduct immediate coordination with relevant parties and aviation companies.“We will also report this situation to the Regional Secretary and the Regent. Therefore, we anticipate this situation to not lasting and critical for us in Wamena, and for the Central Highland area in general,” said the Head of Jayawijaya Industry, Trade and Cooperation Office, Semuel Munua at his office on Tuesday.“We also struggle that the existing aviation with restricted flying hours could be given clearance to serve three to four times a day,”
According to him, he will find a solution of this problem immediately because Wamena is an axis of the other central highland areas. If this situation could not be immediately solved, the highland areas would experience the similar situation.
He admitted the disturbance experienced by Jayawijaya Dirgantara and Cardig Air also affected Trigana Air, while some aviation companies that serve six regencies of the Central Highland area could not fulfill this need. At least aviation should fly to Wamena three to four times a day. “With the enforcement of flying hour restriction, the stock of all commodities is shortage, but we are trying to fit the supplies for next week. For instance, gasoline has reached 35 thousand rupiahs per litter in Wouma Sub-district, while the stock of diesel also quite rare because only two aircrafts, Trigana and Cardig, are operating,” he said.
“We also appealed to retailer for not taking benefit of this situation by increasing the price. Sanction would be applied to those who violate the standard of price, our stags will monitoring to the field and seize the stuffs,” Munua said.
Person in Charge of an aviation company in Wamena, Michael Bidure, said his company only receives order. “If we got diesel to be transported, we will carry it to Wamena. But related to the lack of gasoline, please ask to suppliers in Jayapura as well as retailers in Wamena, because we are only transporting,” Bidure said.
A gasoline and diesel retailer at Jalan Hom-Hom, Wamena said the increase of gasoline price is occurred due to lack of supplies from Jayapura since three days. Even on Tuesday (29/9/2015) people were queuing at some gasoline retail stalls for their motorcycles. While the retailers only get stock of few drums of gasoline only. (Islami/rom)
———————————————————-
http://tabloidjubi.com/en/2015/10/01/papuan-councilor-slams-police-killing/
8) Papuan Councilor Slams Police Killing
POSTED BY: ADMIN OCTOBER 1, 2015
Jayapura, Jubi – A Papuan councilor criticized the shooting allegedly committed by the police that killed Kaleb Bagau and injured Efrando in the area of Gorong – Gorong, Timika, Papua, on Monday (28/09/2015), saying that Papuans have been treated like animals for so long.
The chairman of the faction of Golkar party of Papua Legislative Council (DPRP), Iknasius W Mimin, said Papuans have been victims of injustice, being chased, shot and killed.“We are also part of this country but why are Papuans always killed. Where is the position of countries now? If this keeps happening, where are Papuans going since the Papuan people since in are their own land, they are chased and killed. For how long Papuans will be sacrificed? “Mimin said via phone when contacted by Jubi on Tuesday (09/29/2015).
According to him, such conditions make the Papuans now feel unsafe in their own land. Various stigma is always associated with the Papuans.“DPRP, local governments, NGOs, and activists continue to stand for this but these condisitions are not changed. For how long Papuans would be treated like this, “he said.
The same was said by a member of DPRP of Commission I on Politics, Governance, Law and Human Rights, Laurenzus Kadepa. He said that, last August, the military shot six people in Mimika, two of them died and now police took a turn in shooting. Military and police in Papua are”racing” to shoot and kill civilians.“Military/ police shot and killed native Papuans like a hunted animal. After the military shot people in Timika, members of the police did the same thing as a result two high school students became victims. Papua is in humanitarian crisis, “said Kadepa via phone. (Arjuna Pademme/ Tina)
————————————————————————-
http://tabloidjubi.com/en/2015/10/01/violence-against-children-in-papua-reaches-emergency-levels-komnas-pa-says/
9)Violence Against Children in Papua Reaches Emergency Levels, Komnas PA Says
POSTED BY: ADMIN OCTOBER 1, 2015
Manokwari, Jubi – The head of the National Commission for Child Protection, Arist Merdeka Sirait, said that violence against children in the province of Papua and West Papua is an emergency.
“Based on the reports, the number of violence against children in Papua and West Papua in Indonesia is very high so that the National Commission for Child Protection ( Komnas PA) declared violence against children in Papua as an emergency,” said Sirait in Manokwari on Tuesday (30/9/2015).
He said the brutal murder case of a pregnant woman and two toddlers in Bintuni Bay, West Papua, Papua last week showed emergency child abuse.“The killing of the two kids and her mother who was four months pregnant by unidentified members of the military, more sadistic than the murder of the boy Angelene in Bali,” he said.
He explained that violence against children in Papua dominated by sexual violence and it is because of the liquor.“I went to Manokwari Prison, discussed with children inmates who committed sexual violence . The cause they committed the crime was due to alcohol consumption” said Arist Merdeka.
He added that the National Commission for Child Protection will encourage the government of Papua and West Papua to continue the campaign to stop violence against children. (*/Tina)
-----------------------------------
Posted by AWPA Sydney News at 1:31 AM