The conflict between the government and indigenous Papuans, particularly those Papuans involved with the Free Papua Movement (OPM), has long been considered an Indonesian domestic affair. The government has rejected the involvement of any foreign parties in the settlement of issues faced in Papua.
Respecting Indonesia’s sovereignty, no foreign country has raised the Papua issue at regional or international forums. No country supports the OPM’s struggle for separating Papua from Indonesia.
Nevertheless, as Indonesia celebrates 70 years of independence and 52 years since Papua’s integration into the republic this year, there have been some new developments involving the Papua issue in the Pacific region.
The new developments began with the formation of the United Liberation Movement for West Papua (ULMWP) in December 2014. Three organizations under the umbrella of the OPM gathered in Port Villa.
With the help of Vanuatu, they established the ULMWP to coordinate activities and represent the resistance movement in collaboration with external parties. Since then the OPM has appeared as a more united force with a united voice.
Representing the various Papuan resistance groups, the ULMWP officially applied for full membership at the Melanesian Spearhead Group (MSG), a sub-regional grouping in the Pacific, in February 2015. The MSG comprises Papua New Guinea, the Solomon Islands, Vanuatu, Fiji and New Caledonia.
The application was supported by representatives from all countries in Melanesia. They have called the people of Papua their “Melanesian brothers and sisters of West Papua” and have declared the Papua issue a Melanesian issue.
Instead of granting the ULMWP full membership, the Melanesian leaders at the 20th MSG summit held in June 2015 in the Solomon Islands decided to offer the group observer status. It was the first political recognition of the OPM.
As an observer, the ULMWP began introducing the Papua issue to all the countries of the Pacific. Within two months, the issue was drawing wider attention — and the OPM was stronger support from Pacific countries.
Such was the support from around the Pacific region, in August 2015 it was decided that the Papua issue would be one of five main agenda items at the 46th summit of the Pacific Islands Forum (PIF) in PNG in mid-September.
On Sept. 1 and 2, the Pacific Islands Association of Non-Government Organizations gathered in Port Moresby for a civil society partnership forum. The organizations offered a collective public apology to Papuans for their past ignorance and neglect of their suffering.
They jointly called for Pacific leaders “to send a high-level PIF delegation, including civil society organizations [CSOs] and church leaders, on a fact-finding mission to West Papua” and urged for “the re-inscription of West Papua on the UN [Non-Self-Governing Territories] list as an important step toward an independent and free West Papua”.
The leaders of 16 Pacific countries gathered in Port Moresby for the 46th PIF summit, from Sept. 7 to 11.
They communicated their collective position on Papua in the PIF’s communiqué, explicitly expressing respect for and recognition of Indonesia’s sovereignty over Papua, while raising their concern regarding human rights violations in the province.
The Pacific leaders requested that the Prime Minister of PNG consult with the Indonesian government on the establishment of a fact-finding mission to Papua.
The mission is meant to assess the human rights situation in Papua and West Papua provinces. Consequently, the Papua issue is now a Pacific issue. Its settlement will and should involve Indonesia, all Pacific countries and the Papuans.
Pacific CSOs and leaders of Pacific countries will now be following the situation closely, particularly possible human rights violations in the western half of New Guinea.
Pacific leaders may now raise the Papua issue at sub-regional, regional and even international forums, as 52 years on from West Papua’s integration into Indonesia, and after the resulting deaths of thousands of Papuans, the case remains unsettled.
It is necessary for the government to prevent Papua from becoming an international issue. It cannot and will not be settled by deploying more troops to Papua and West Papua and establishing more military commands there.
For five decades now the security approach has failed. The government is strongly urged to explore peaceful means to address the situation.
Given these new developments, President Joko “Jokowi” Widodo should appoint a high-level government official, such as a minister, to be in charge of the case. That person could be assisted by a small team of non-Papuans who are fully trusted and respected by Papuans, who could maintain close communications with all parties concerned.
Such communication is badly needed to prepare the way for peace talks between representatives of the government and the Papuan resistance groups represented by the ULMWP. This could help to settle the Papua issue through peaceful means.
____________________________
The writer is a lecturer at the Fajar Timur School of Philosophy and the Coordinator of the Papua Peace Network in Abepura. In 2013 he was awarded the Tji Hak-son Justice and Peace Award in Seou—————————————————————————————

SEPTEMBER 30, 2015
We have just received an urgent comprehensive human rights report from the West Papua National Committee (KNPB) that on Monday 28th Levi Gebze a 16 year old West Papuan boy was arrested and tortured by the Indonesian police in Merauke. 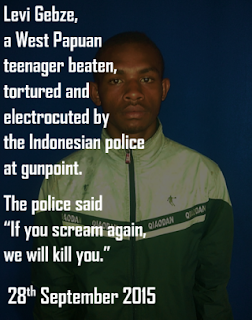 According to the report, at 13:30 Levi was on the way home on the Muli Road. He was suddenly followed by an Avanza car with 4 members of Indonesian police/intelligence inside. He was stopped and forced to get inside the car and with no questions asked was beaten by the police. He was apparently beaten and mugged with a pistol. He was then brought to the police station where he was interrogated and tortured again. He was beaten and also electrocuted. The police arrested him under charges of stealing a bag and laptop on the Yobar beach but when he denied the charge the police continued to beat and electrocute him.
Levi was then told to get into a car and was brought by 4 police officers to the local Junior High School to get information related to the case. Witnesses testified that he was still in the car and still being beaten. He was then taken on the road and the police even threatened to kill him, saying “You don’t scream again. If you scream again we will kill you.” The Human Rights report stated that he was then returned to the police station where the persecution and electrocution continued, even though he was innocent of theft.
It is not yet known what happened afterwards but at 16:00, the family of the victim arrived and took him home.
Levi is still suffering the effects of this brutal torture and there has been no investigation into the actions of the police whatsoever. This attack came on the same day 1 West Papuan teenager was killed and another shot by the Indonesian police in the town of Timika. It also comes less than 3 weeks after Douglas Nasyok, another West Papuan teenager was beaten and tortured by the Indonesian police in Merauke, the same town as Levi.
These events are further evidence of the deteriorating human rights situation spoken of by Dame Meg Taylor, Secretary General of the Pacific Islands Forum recently. The people of West Papua continue to call for a Fact Finding Mission to be sent West Papua and we welcome and encourage efforts by the Pacific Islands Forum to help this happen.
West Papua remains an emergency zone under illegal Indonesian occupation and we continue to appeal to people all around the world including the world’s media, parliamentarians, organisations and others to please spread the word and Take Action to help the people of West Papua finally be free in their own nation.
Photo and human rights information from the West Papua National Committee (KNPB).
————————————-
A google translate of article in suarapapua.com. Be-aware google translate can be a bit erratic.
Original bahasa link at
http://suarapapua.com//read/2015/10/01/2840/skp-ham-desak-polda-segera-usut-tuntas-kasus-timika
3) SKP HAM Urges Immediate Papua Police Investigate Cases Completed Timika
By: Aaron Rumbarar | Thursday, October 1, 2015 - 18:09 pm | Viewed: 73 times
JAYAPURA, SUARAPAPUA.com — Solidarity Victims of Human Rights Violations (SKP HAM) Papua urged Papua police immediately investigate shootings in Timika, killing Caleb Bagau (18) and Efrando IS Sabarofek (17) is still critical in Mimika District Hospital. This unequivocal statement delivered at a press conference in the office of some Papuans, Thursday (01/10/2015).
"In Papua's security forces have been very able to guarantee the freedom of the Papuans. Therefore, the facts from the beginning until today, the authorities always perform inhumane acts, torturing, beating, shooting dead up to a lot of victims died from bullets, “said Peneas Lokbere. According Lokbere, the public was looking at the situation in Papua is currently a kind of a race going on shooting by the military and police. Shooting targets, he said, the people of Papua.
"The shooting was carried out by the authorities openly. But the perpetrators were never prosecuted, this impunity shown during this state and its apparatus. There are a lot of state intervention and military businesses very solid in Papua, "he said.
He also presented a number of cases of human rights violations committed by the security forces. "Let cases of past human rights, the case that just could not be revealed, as in this case 2015 Yakuhimo March 8, 2015, June 26, 2015 Dogiyai case, Tolikara events of July 17, 2015, shooting of two people Timika August 28th."
"And the most horrendous is the case of 28 September 2015 which killed one student in the name of Caleb Bagau and Efrando Sabarofek that while still critical in hospitals Timika," said Lokbere.
Terrible fact that, according to the Secretary of KNPB, Suhuniap Ones, showed the Indonesia state does not give a sense of comfort to the people of Papua, even leading to eradication.
"There have been many acts of violence by Indonesian security forces. So far, the case has not been completed, they are doing more new cases. This fact, as if Papua is a land of hunting or bloody conflict, "said Ones.
Further it also regretted the Papua Police statement. "We are very disappointed with the statement that Papua Police said that shooting in Timika is an effort to protect themselves. Did the brothers who are victims of the shooting a gun then? Nonsense, the police has been found guilty, "said Ones.
And the military commander and the Papua Police, he said, should immediately act decisively members who commit human rights violations in Papua.
"Kira with a word of apology can heal wounds the victim's family? I think this would not be possible. The state already confiscate the wealth of Papua, why is also depriving the lives of the people of West Papua again? Enough already, "he said during a press conference that.
SKP HAM Papua consists of BUK Papua, Papua KontraS, the Independent Student Forum (FIM), KNPB, ICT Network, Franciscans SKPKC Papua and Papua Guard.
Editor: Mary
HARUN Rumbarar

By : BeritaSatu English | on 3:20 AM October 02, 2015
Category : Multimedia, Indonesia Highlights, National News, BeritaSatu English, TV
The Social Affairs Minister, Khofifah Indar Parawansa has come under fire on a visit to the area for the government’s slow response to the earthquake.
http://jakartaglobe.beritasatu.com/multimedia/residents-sorong-sleep-outdoors-fears-aftershocks/
Posted by AWPA Sydney News at 2:30 PM