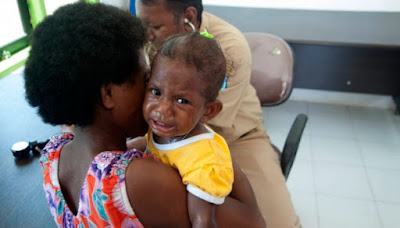 A mother bringing her child to the clinic. Sorong, Papua, June 3, 2015. TEMPO/Wisnu Agung Prasetyo
TEMPO.CO, Jayapura-The provincial government of Papua has earmarked an autonomy fund of about Rp13.5 billion for the health care of its residents. The fund will be used to, among others, rent four aircraft to fly patients from remote areas to health facilities in bigger cities.
Dr. Silvanus Sumule, secretary of Papua's Health Department, said in Jayapura, Wednesday, October 7, that in 2015 the Province has issued a governor's regulation on social assistances for patients registered in the Papua Health Card program (PPP).
The regulation allows the provincial government to collaborate with several religious-group airlines: the Associated Mission Aviation (AMA), the Mission Aviation Fellowship (MAF), Yajazi, and Heli Mission.
"Total fund allocated to finance the four religious airlines is around Rp3.5 billion, prepared in 2015," he said.
The collaboration allows Papuans to receive flight services when they need to get treatment at referred hospitals in Papua or national hospitals in other areas.
"With this service, we aim to reduce mortality for infants, toddlers, and mothers," he said.
Silvanus added that the service is also expected to help solve the number of health and medical problems in Papua caused by geographical constraints.
ANTARA | RR
————————————————————————
HTTP://EN.TEMPO.CO/READ/NEWS/2015/10/07/055707400/INDONESIA-AUSTRALIA-ON-JOINT-SEA-PATROL-TO-COMBAT-POACHERS
WEDNESDAY, 07 OCTOBER, 2015 | 20:00 WIB
2) Indonesia, Australia on Joint Sea Patrol to Combat Poachers
Zoom Out Zoom In Normal
TEMPO.CO, Jakarta-The Ministry of Maritime Affairs and Fisheries has signed a cooperation agreement with the Australian Agriculture and Water Resources Department to combat illegal fishing through a joint patrol. Through the cooperation, Indonesia is hoping to put a stop on foreign vessels stealing fish in Indonesian waters.
"Without Australia's assistance, Indonesia will find difficulties to monitor everything happening in the eastern waters, especially around the borders of Papua New Guinea and East Timor," Minister of Marine and Fisheries Susi Pudjiastuti said in news conference on Wednesday, October 7, which was also attended by Australia's
Minister for Agriculture and Water Resources Barnaby Joyce.
Susi said the collaboration is expected to prevent illegal fishing in Indonesian waters bordering with Papua New Guinea, East Timor, and Australia. So far, Australia has provided sufficient help in preventing illegal fishing activities in Indonesia.
Indonesia and Australia have for the last nine years conducted annual work group meetings on maritime affairs and fisheries.
In last year's meeting in Perth in October, the two nations put illegal fishing and eco-marine collaborations on top of their agendas.
Susi said Indonesia wants to increase marine cooperation with Australia, hoping that the latter would sign a declaration to combat illegal fishing in Asia and the Pacific. Indonesia also encourages Australia to provide all assistance needed in the fight against illegal fishing.
Bernaby Joyce said Australia is pleased with the cooperation. "We are very happy with this partnership to ensure the eradication of illegal fishing," Bernaby said.
AMIRULLAH
—————————————————————
http://www.sci-news.com/biology/science-cophixalus-frogs-western-new-guinea-03315.html
3) Two New Species of Narrow-Mouthed Frogs Discovered in Western New Guinea


Dr Rainer Günther, a German herpetologist at the Museum für Naturkunde Berlin, and his colleagues from Australia and Indonesia have described two new species of the microhylid frog genus Cophixalus from the Raja Ampat Islands off the western tip of New Guinea. The scientists have documented their discovery in a paper published in the journal Zoosystematics and Evolution.


The newly discovered frogs are characterized by small and slender bodies, measuring less than 0.9 inches (2.3 cm) in length.
They are members of the narrow-mouthed frog genus Cophixalus that occurs mainly in New Guinea and northern Australia.
Dr Günther and co-authors decided to name these new frogs Cophixalus rajampatensis and C. salawatiensis.
Their description brings the total number of Cophixalus frogs known from New Guinea and surrounding islands to 46, and the total number from western New Guinea (Papua and West Papua Provinces including the Raja Ampat Islands) to 10.
The specimens of Cophixalus rajampatensis and C. salawatiensis were collected from lowland rainforests. There the scientists noted that after heavy rains at night the males perched on leaves of bushes and produced sounds, characteristic for each species.
“Curious enough, when dissected one of the male specimens, assigned to Cophixalus salawatiensis, revealed a female reproductive system with well-developed eggs,” the researchers said.
“Simultaneously, neither its sound-producing organs, nor its calls differed in any way from the rest of the observed males from the same species. Therefore, it is to be considered a hermaphrodite,” they said.
_____
Günther R et al. 2015. Two new species of the genus Cophixalus from the Raja Ampat Islands west of New Guinea (Amphibia, Anura, Microhylidae). Zoosystematics and Evolution 91 (2): 199-213; doi: 10.3897/zse.91.5411
------------------------------------
Posted by AWPA Sydney News at 1:45 PM