2) Jokowi, human rights and  the US
3) ANYTHING FOR GOLD IN
4) YAHUKIMO POLICE ACCUSED OF TORTURING TWO KNPB MEMBERS
5) Despite Military Crackdown in Papua & Other Rights Abuses, Obama Hosts Indonesian President in D.C. 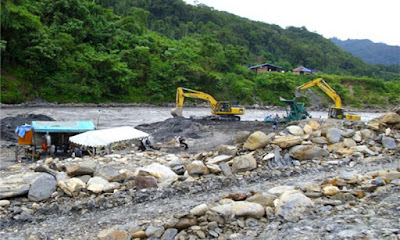 Ilegal mining area in Degeuwo river – Jubi
Jayapura, Jubi – Paniai Regional Customary Council, John NR Gobai, said one of mining companies operated along the Degeuwo River, Paniai Regency, namely PT. Madinah Qurrata’ain, has appointed retired Police Inspector General RT as its chief executive.
The local people found out about it after a report said a police general who had been allowing the company to continue its operation employed a number of Mobile Brigade personnel of Papua Police.
“In Degeuwo, a retired police officer, a former Inspector General has been came up, while he was known involving with humanity issue. In our record, he held many important positions in the Indonesian Police Headquarters, including as the Coordinator of the Social Economy Experts of the former Indonesian Police Chief, General (retired) Sutarman in 2013,” Gobai told Jubi on Sunday (25/10/2015).
For that reason, he asked the Papua Police Chief Inspector General Paulus Waterpauw to immediately withdraw the Mobile Brigade personnel who guard around the illegal mining area located in the customary territorial of three tribes, Wolani, Mee and Moni. “The Police officers and Mobile Brigade personnel were actors behind the shooting incident over Melianus Kegepe, Mathias Tenouye and Selpius Kegepe. The bullets were belong to Brimob,” he said.
He further said the Papua entrepreneurs and traders would ready to lead the gold companies in Papua, such as PT. Salomo Mining. While PT. Madinah also less contribute to the local government and indigenous people in providing economic benefit.“A good resolution for Degeuwo is the Paniai Local Government coordinates with the Papua Provincial Government to determine the people’s mining area as proposed some times ago. The Papua Governor has approved that WPR could accommodate the entire group as well as to assure all interest. Then, the People Mining Permit (IPR) would be issued on behalf of the land tenure owner to ensure the indigenous people to become the landowner or permit holder. So the mining workers work under the supervision of indigenous people and LPMA SWAMEMO would become their coach,” he said.
The Chairman of LPMA SWAMEMO (Walane, Mee and Moni Community Development Institution), Thobias Bagubau said LPMA will collect the aspiration of people living surrounded the illegal mining area along the Degeuwo River, Paniai Regency. The socialization to collect the people’s aspiration was held on 21 – 30 September 2015 in the illegal mining areas, from block 45, 81, 99, Baya Biru to Gunung Botak.“At that time we held a meeting with the indigenous people involving the tribes of Wolani, Mee and Moni and other tribes such as Dani, Sengir Talaud, Buton and Makassar to listen their testimonies,” Thobias Bagubai told Jubi in Abepura, Jayapura City on Thursday (22/10/2015). On that occasion, Bagubau said, he revealed his vision and mission in order to maintain or protect the environment, community and to reduce the conflict in there. (Abeth You/rom)
—————————————————————————
http://www.thejakartapost.com/news/2015/10/27/jokowi-human-rights-and-us.html
2) Jokowi, human rights and  the US
Stanley Harsha, Jakarta | Opinion | Tue, October 27 2015, 4:21 PM - 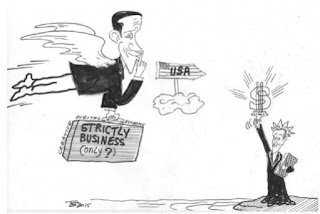 This is a rush transcript. Copy may not be in its final form.
AMY GOODMAN: We begin today’s show looking at Indonesia, the world’s fourth largest country. On Monday, President Obama met at the White House with Indonesia’s new president, Joko Widodo, who is also known as Jokowi, to discuss climate change, trade and strengthening U.S.-Indonesian ties.

PRESIDENT BARACK OBAMA: Our partnership is very much in the interests of the United States, given Indonesia’s large population, its leadership in the region, its democratic traditions, the fact that it is a large Muslim country with a tradition of tolerance and moderation, and its role in trade and commerce and economic development.

AMY GOODMAN: During his visit to the White House, Indonesian President Jokowi announced Indonesia intends to join the TPP, the Trans-Pacific Partnership trade deal the United States has forged with 11 other nations.

PRESIDENT JOKO WIDODO: [translated] Indonesia is an open economy. And with the 250 million population, we are the largest economy in Southeast Asia. And Indonesia intends to join the TPP.

Jakarta (ANTARA News) - Indonesia, for the first time, will be hosting the Melanesian Cultural Festival 2015 in Kupang, East Nusa Tenggara from October 26 to 30, which is aimed at improving cooperation among Melanesian countries."The festival is based on the reality that the majority of Melanesians are living in Indonesia, approximately 80 percent of them," the Director General of Culture at the Ministry of Education and Culture, Kacung Marijan said on last Thursday.  The festival will draw participation from stakeholders, who are engaged in culture and arts in Indonesia, Fiji, Papua New Guinea, Solomon Islands, Timor Leste, Vanuatu and New Caledonia, as well as representatives from the Melanesian Spearhead Group, based in Vanuatu.Indonesia will send its representatives from five provinces, which has a population of Melanesia, namely East Nusa Tenggara, Maluku, North Maluku, Papua and West Papua.The festival will feature a conference and film screenings, as well as dance performances.Three Indonesian films will be screened at the festival, which are "Atambua 39 C", "Tanah Mama" (Mother Land) and "Cahaya Dari Timur" (Light of the East).Besides Indonesia, Fiji and New Caledonia will also send their movies to be screened to exchange knowledge, tradition and culture and to increase solidarity among the Melanesians.Melanesia is a sub-race, which in Indonesia, has spread in East Nusa Tenggara, Maluku, North Maluku, Papua and West Papua.Archaeologists from the National Archaeological Research Center, Harry Truman Simanjuntak, said the festival also aims to sensitize people against the two biggest races in Indonesia -- the Mongoloids and Austronesians, who are brothers and have been interacting culturally and biologically for tens of thousands of years.“Do not create any dividers, we need to know each other to strengthen the national spirit," Harry said.
————————————————————
http://jakartaglobe.beritasatu.com/business/local-investors-get-slice-freeport-indonesia-ipo-bourse-chief-says/
7) Only Local Investors to Get a Slice of Freeport Indonesia IPO, Bourse Chief Says
By : Muhamad Edy Sofyan | on 9:52 PM October 27, 2015
Jakarta. The Indonesian stock exchange authority says it will restrict the market for a highly anticipated initial public offering of shares in mining giant Freeport Indonesia to local investors only.
US-based Freeport-McMoRan plans to divest an initial 10.6 percent stake in its Indonesian unit as part of a deal to allow it to extend its contract to operate the Grasberg copper and gold mine in Papua province beyond 2021.
The company, which controls a 90.64 percent stake in Freeport Indonesia, is expected to submit details about the planned divestment to the Indonesian government this month.
Indonesia Stock Exchange (IDX) director Tito Sulistio said on Tuesday that his office, along with the Financial Services Authority, was drafting a regulation prohibiting foreign investors from snapping up the Freeport Indonesia shares, in a bid to accommodate domestic investors.
“Foreign investors will be able to buy, but only after a couple of years,” he added.
Tito said he believed the plan would receive a positive response from the market and major domestic institutional investors like workers’ pension fund BPJS Ketenagakerjaan and civil servants’ pension fund Taspen, both state-owned.
Samsul Hidayat, Freeport Indonesia’s director for corporate evaluation, said he had met officials from the Energy and Mineral Resources Ministry to discuss the planned divestment, prescribed in a 2014 regulation.
The government owns a 9.36 percent stake in Freeport Indonesia; under the regulation, Freeport-McMoRan needs to divest a total of 20.64 to bring its own stake down to 70 percent.
No details have been given for the time frame for the divestment or the projected value of the shares.
———————————
Posted by AWPA Sydney News at 1:16 PM