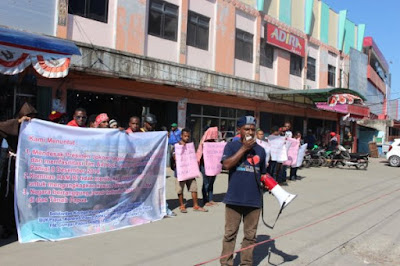 Demo SKP Papuan human rights that led intimidation against journalists (Photo: Oktovianus Pogau / SP)
JAKARTA, SUARAPAPUA.com --- Legal Aid Institute (LBH) Jakarta Press denounced the arbitrariness of Jayapura City Police officers, who guns, and seizing the reporter's camera Step Magazine, Abeth You, on Thursday (10/08/2015) yesterday in Jayapura, Papua.
"The actions of the police officers had been injured members of press freedom and freedom of expression in Indonesia are already guaranteed in the constitution," said Asep Komarudin from Jakarta LBH Pers, in a press release sent to the editor suarapapua.com, this afternoon.
According to Asep, the actions of individual members of the police resort city of Jayapura is a form of blockage or inhibiting freedom of the press, and the act is a criminal offense in accordance with law number 40 of 1999 on the Press Article 18, paragraph 1, which reads: "Any person who unlawfully intentionally perform actions that result in delay or hinder the freedom of the press shall be punished by a maximum imprisonment of 2 years or a maximum fine of Rp. 500.000.000, - (five hundred million rupiah). "
Asep said, pointing a gun, and throttled committed by police officers resort to Abeth You Jayapura City and of demonstrations is considered a crime of persecution in accordance with Article 352 of the Criminal Code.
"The city of Jayapura Police have violated human rights because it has been forcibly dispersed demonstrations in accordance with article 25 of Law No. 39 of 1999 on human rights states that every person has the right to express opinions in public."
"The act of Jayapura City Police officers are very contrary to the spirit of President Joko Widodo that open access to information, especially for press freedom in Papua," he said.
Press LBH Jakarta also asks, first, national police chief ordered the police chief to investigate Papua Jayapura City police officers who have committed abuses and press freedom insurmountable barrier to the Criminal Code and the Press Law.
Second, the National Police Commission and the National Human Rights Commission to immediately conduct investigations related to violations of freedom of the press and of expression in public.
Third, the Press Council immediately urged the police to investigate cases of obstruction and inhibition of press freedom in Papua.
Fourth, the police of the Republic of Indonesia, especially in Papua to guarantee freedom of the press and protect journalists who are running their journalistic activities in Papua. And ensure that similar incidents do not recur.
Oktovianus POGAU
————————————————————————-
2) Police in Papua use violence to disperse a peacful demonstration
Statement by the LP3BH Executive-Director on8th October 2015  The action by the police (Polres) in Jayapura and the police (Polsek) in Abepura in forcibly dispersing a peaceful demonstration,arresting several monks from the Catholic Church and a number of activists in Abepura-Jayapura on 8th October was a serious violationof their basic human rights. It was a serious violation of their right to freedom of expression.   The demonstrators were calling on the

Government of Indonesia under President Ir H. Widodo to resolve a number of cases of human rights violations, in particular the incident
in Paniai 8 when four school children were killed.  The police have perpetrated many acts of repression against peaceful actions in the Land of Papua. They always failing to handlesuch actions in accordance with democratic principles.  These demonstrations are all too often occasions when civil societyactions are handled by the police with acts of violence that seriously violate basic human rights.   As the Executive-Director of the LP3BH-Manokwari, I call on human rights activists in the Land of Papua to work together for an actionagainst the  local and regional police for what they have committed against human rights activists and the Catholic Church monks.   What the Chief of Police should now do is to dismiss the chiefs of police in the City of Jayapura and in Abepura who have so blatantlyengaged in very harmful operations which have clearly violated the basic human rights of all the people who were involved in the peacefuldemonstration that were held yesterday.Peace![Translated by Carmel Budiardjo, Recipient of the Right Livelihood Award 1995
—————————————————————————
http://tabloidjubi.com/en/2015/10/09/police-tighten-security-at-freeports-explosive-warehouse/
3) Police Tighten Security at Freeport’s Explosive Warehouse
POSTED BY: ADMIN OCTOBER 9, 2015
Timika, Jubi – Mimika Police working with PT Freeport Security personnel have tightened security at the company’s explosive warehouse located at the Light Industrial Park (LIP).
Mimika Police Deputy Chief Commissioner Wirasto Adi Nugroho told reporters in Timika on Wednesday (7/10/2015) that the action was taken after an unknown person reportedly entered the warehouse days ago.“In the future, we will coordinate with Freeport’s security guards to improve the security on Freeport’s explosive warehouse because the location is quite remote,” he said.
In this context, he said, a troop of Mobile Brigade has been deployed to provide security assistance to the company that earlier only have a unit of security guard.
Wirasto admitted there are thousands of magnum-type explosive stored at the warehouse for the purpose of mining operation.
On Monday (5/10), the security guard found a padlock attached on the warehouse was broken. He also found the perpetrator who ‘s not identified yet broke the wire fence behind the warehouse. Some stuffs were found scattered outside of the warehouse.
So far the police assumed the perpetrator came in the warehouse searching for food that might be stored. “We will evaluate the warehouse’s security system, why could the perpetrator easily enter it. We will also ask the management to install a camera to help identify people who enter the warehouse,” he said.
Until now the Mimika Police is still doing the investigation related to the destruction of Freeport’s facility. PT Freeport use the magnum-type explosive to crush the stones at the Grasberg open mining area and at several underground mining areas in Tembagapura. Those stones contain the copper and gold minerals to be further processed by PT. Freeport. (*/rom)
————————————————————————
http://tabloidjubi.com/en/2015/10/09/papua-signs-declaration-on-melanesian-brotherhood/
POSTED BY: ADMIN OCTOBER 9, 2015
Ambon, Jubi – Papua and four other Indonesian provinces signed the ‘Declaration on Melanesian Brotherhood’ in Ambon, Maluku province on Wednesday (7/10/2015) during an event attended by the President Joko Widodo.
The former Papua Vice Governor and Regional Secretary Constan Carma represented Papua Governor Lukas Enembe and put an initial-sign on the paper. “Papua Governor Lukas Enembe was not able to attend the event, so he gave me a mandate to put an initial-sign as a sign of approval.
According to Karma, although he was not able to attend the event, the Governor Lukas Enembe will later sign the Declaration of Melanesian Brotherhood. “In addition to Papua, four other provinces participated in the signing of declaration are East Nusa Tenggara (NTT), Maluku, North Maluku and West Papua,” he said.
He explained in addition to Papua Governor, the governors of North Maluku and West Papua also were not able to attend the event. “The Declaration of Indonesian Melanesian Brotherhood has connection with the internal political interest in the eastern Indonesia,” he said.
Further he said this is because people in the five provinces who agreed to sign the declaration are part of or group of Melanesian race.“This political agreement is excellent and important to maintain the unity and brotherhood of Melanesia and Indonesia,” he said.
He further said this agreement is important in political relation because the five provinces have different custom and culture, this could be a mediator or unifier. (*/rom)
Oktovianus POGAU
————————————————————-
http://tabloidjubi.com/en/2015/10/08/air-force-involved-in-probe-into-shooting-case/

POSTED BY: ADMIN OCTOBER 8, 2015
Jayapura, Jubi – Air Force officers joined an investigation into the alleged shooting of police officers by members of the Air Force Special Forces (Paskhas) at Sentani Airport, Jayapura regency.
Air Base Commander Colonel Purwoko to reporters after attending a ceremony of the 70th anniversary of the military at Makodam on this week that the investigation team had arrived from Jakarta.“I have not had time to see them for attending this ceremony,” he said.
He if his personnel made a mistake then it must be processed in accordance with the applicable laws of the military.
He continued up to now he did not know how many members who did the shooting and is still deepening in the case. “ I don’t know yet. It will be proven and a special team is deepening this case,” he said.
Previously, chief of Papua Police, Inspector General (Pol) Paulus Waterpauw said there was no intention of this case. “It was a rapid series of events where our members and Paskhas were in the field together to overcome the attack of the community,” said Waterpauw.
He said the two victims are now undergoing treatment at Bhayangkara hospital in Kotaraja, Jayapura city. They are in stable condition. “Both members of the police and members of Paskhas were there when they received a complaint from the securitity and it was in the night. I think it is appropriate regulations or SOPs. It means the community need to not entry into the airport area, “he said.
In addition, he said there were groups of people who vandalized are now detained at Jayapura police station for further question.“It will be seen in the effort of gathering information. So there is no intention or any other purpose. We’re coordinating to the level leadership to immediately work together, “he said. (Roy Ratumakin/Tina)
———————————————————
http://tabloidjubi.com/en/2015/10/08/png-residents-dominate-kina-currency-exchange-in-jayapura/
6) PNG Residents Dominate Kina Currency Exchange in Jayapura
POSTED BY: ADMIN OCTOBER 8, 2015
Jayapura, Jubi – People from Papua New Guinea dominate foreign currency trade in Jayapura, a foreign currency trader said.
Syahbar said PNG residents who exchange money had come to Jayapura for holiday or studying.“They come for holiday or family visits. They most often come to exchange the kina to the rupiah and students who study in Jayapura also exchange money here,” Syahbar told Jubi in Jayapura on last week.
At money exchange counters , one kina is worth Rp 4,500.“I bought 1 Kina for Rp 4,500. I resell for Rp 4,800, “he said.
He added that residents of Jayapura who sell in the border area also often exchange money in its place.“On weekend, traders usually sell at the border of RI-PNG and they exchange money there, “he said. As reported earlier, Foreign Exchange Business activities (KUPV) stated according to data obtained from the activities of traders Foreign exchange buying and selling currency in Jayapura is dominated by PNG money.
Sumi, currency trader of PT Buma Jaya Abadi, in Jayapura said foreign currency exchange currency is dominated by PNG Kina to Rupiah.“For currency exchange of PNG Kina, many residents come exchanged for shopping and a variety of other purposes, ” he said. (Munir)
———————————————————————-
Posted by AWPA Sydney News at 2:22 PM