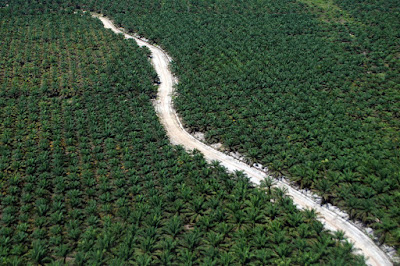 It is followed by Nordea with $0.3 billion, AP-Fonderna with $163 million, Swedbank with $140 million and Handelsbanken with $66 billion.
"Evidence that Norwegians and Swedes are indirectly supporting an industry that has destroyed huge tracts of rainforest is hard to square with this region’s reputation as a global leader in the fight against deforestation," senior policy adviser Vemund Olsen of Rainforest Foundation Norway said on the organization's official website.
"It's a sobering reminder of the powerful economic forces propelling Indonesia’s palm oil industry and rewarding companies that adopt a scorched earth approach to palm oil production."
Which Banks?
The main recipients of the Nordic investments in Indonesia are Bank Rakyat Indonesia (BRI), Bank Mandiri, Bank Nasional Indonesia (BNI), and Bank Central Asia (BCA) – all of which, according to the report, have been backing palm oil companies that do not adopt sustainable practices.
Bank Mandiri, BNI, and BRI are said to be the three largest lenders to the palm oil sector, while BCA is "likely" the fourth.
Bank Mandiri has been linked to companies such as Darmex Agro/Duta Palma and Sawit Sumbermas Sarana, both of which have been charged with clearing forests. The latter even operates on forest land without a permit.
BNI has financed Best Group and Korindo, which have poor fire prevention and mitigation systems. The former has been involved in violation of workers' rights, while the latter is suspected of intentional forest burning.
BRI has given loans to Tunas Baru Lampung and Sampoerna Agro, both of which have been draining peatlands and are involved in land disputes with local communities.
The report also links BCA to HPI Agro and Indo Agri/Salim responsible for peat drainage.
The palm oil industry accounts for approximately 8 percent of the banks' total lending — approximately half of all lending for the industry.

Since early 2014, outstanding agriculture sector loans of the four banks have increased by 70 percent, and at the end of 2016, the loans for palm oil sector reached about $12.5 billion.#China
The Singaporean banks accepting Nordic investments are the Oversea-Chinese Banking Corporation Limited (OCBC) and DBS Bank. Neither of them has disclosed details of their involvement in Indonesian palm oil sector, but their activities on the Indonesia Stock Exchange (IDX) indicate that it exists.
By the end of 2016, OCBC had outstanding loans of Rp 12 trillion ($901.24 million) in the agriculture and mining sector, while DBS's outstanding loans to agriculture and fisheries stood at Rp 8 trillion.
According to AidEnvironment, among the banks behind the 16 palm oil companies listed on IDX, outstanding loans with OCBC and DBS respectively were the 6th and 8th largest.
OCBC has been giving loans to Tunas Baru Lampung and Sampoerna Agro, while DBS to Sampoerna Agro and Indo Agri/Salim.
"These [Indonesian and Singaporean] banks are a major part of the palm oil problem because they are funding destructive and unethical palm oil ventures while their narrow financial interests, which favor rapacious producers over more responsible companies, undermine efforts to make the industry more sustainable," Olsen said.
Solving the Problem
Fair Finance Guide Sweden project manager Jakob König called on the Nordic banks and pension funds to withdraw investments from banks that support environmentally damaging palm oil businesses.
"We cannot be a credible leader in the fight to preserve the world’s rapidly dwindling rainforests when so much Nordic money is so closely tied to rainforest destruction," he said, as quoted by Rainforest Foundation Norway.
The report authors demand that the Southeast Asian banks adopt the No Deforestation, No Peat, No Exploitation (NDPE) financing policy, aimed at ending deforestation, protecting peatlands, ensuring consent from communities for any land use and no human rights violations.
To address the problem, World Wildlife Fund (WWF) Indonesia and Indonesian Financial Services Authority (OJK) have come up with a project titled "First Movers on Sustainable Banking," aimed at improving the environmental and social governance of Indonesian banks, and encouraging them to play a bigger role through their risk management frameworks, WWF said in a statement released on Wednesday.
WWF Indonesia and OJK have also developed a practical guide for responsible financing in the palm oil sector.
—————————————————
http://www.radionz.co.nz/international/pacific-news/332042/west-papua-not-mentioned-in-nz-indonesia-defence-deal
2) West Papua not mentioned in NZ-Indonesia defence deal
7:09 am today
The New Zealand defence minister and his Indonesian counterpart have signaled stronger defence ties between the two countries without acknowledging humanitarian concerns in West Papua.

The ministers signed a Joint Statement on Defence Relations on Wednesday at a meeting in Jakarta.
The statement identifies a range of areas to further strengthen the defence partnership between New Zealand and Indonesia.
They include joint military exercises, intelligence sharing, emergency assistance and training visits.
The New Zealand defence minister Mark Mitchell said Indonesia plays a fundamental role in supporting security in the Asia-Pacific region.
However, a joint statement issued by both governments following the meeting made no mention of instability in West Papua, where the indigenous pro-independence movement had reportedly been suppressed by security forces since Indonesia annexed the province in 1962.
——————————————
Posted by AWPA Sydney News at 1:48 PM