2) Palm oil firm pledges to stop deforesting after RSPO freezes its operations in Papua
———————————————————
http://www.radionz.co.nz/international/programmes/datelinepacific/audio/201843483/papuan-independence-leader-pushes-cause-abroad
1) Papuan independence leader pushes cause abroad
From Dateline Pacific, 3:05 pm on 11 May 2017
The West Papuan independence leader Benny Wenda says international support for his people's cause is steadily growing.
Mr Wenda is in New Zealand this week, raising awareness about the Indonesian-administered region of Papua, or West Papua, which he fled in 2003.
Last night in Wellington he addressed a group of MPs, after which eleven members signed a declaration by the International Parliamentarians for West Papua.
This international organisation of MPs is calling for an internationally supervised self-determination vote in West Papua.
Mr Wenda spoke to Johnny Blades and began by talking about a core issue of mistrust between Papuans and the Indonesian state.
Listen duration6′ :26″
Add to playlist
Download
Listen 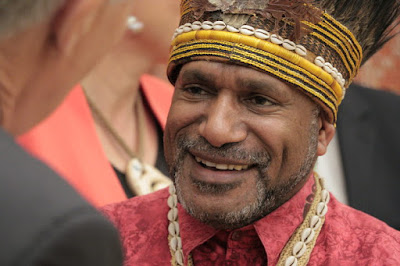 Government chooses Mimika to be one of Indonesia`s smart cities

Timika (ANTARA News) - The Communications and Informatics Ministry has picked Mimika of Papua, to be included among 25 regencies in the country to build a smart city in 2017. A smart city is an urban development vision to integrate information and communication technology and Internet of things technology in a secure fashion to manage a citys assets.Head of the district communications and informatics office of Mimika John Rettob said here on Thursday the government hopes to see 100 capital cities of regency would be smart cities by 2019. "The Communications and Informatics Ministry has prepared and conducted assessment of 100 cities in Indonesia to become smart cities. In 2017, Mimika is one of 25 regencies to have smart city," John said. For that purpose, , the Communications and Informatics Ministry has invited the Mimika district administration to sign on May 25 a memorandum of understanding to launch the smart city program.John said he did not know the reason for the ministry to choose Mimika or the city of Timika as a pilot project for smart city project in the province of Papua. "They did not tell me the reasons although they have asked me to make presentation about the potentials of Mimika. Perhaps the potentials have been the reasons. For Papua, Mimika is the only candidate for smart city," he said. The ministry will give technical guidelines for that project and the district administration will be responsible for providing supporting infrastructure, he added. John said the program of Smart City as already running in a number of other cities in Indonesia like Bandung, West Java, would greatly contribute to improving transparency in public services and would increase public participation.With the program all regional working units (SKPD) would be connected with each other through integrated online networks. The program would greatly improve efficiency in public service such as in licensing procedure with one stop service, in tax payments, birth certificate, vital statistics and registration of patients at government hospitals."Like it or not , as from 2017, Mimika has to start making the necessary preparations. Most important is the commitment of the district administration . Are we ready or not to see Mimika or Timiak smart . At least, we have to start by applying e-governance," John said. In the first phase, implementation of the program is limited to area around the city of Timika as the greatest concentration of population in the regency of Mimika is Timika and nearby town of Kuala Kencana, and Mapurujaya, he added.(*)
————————————
Posted by AWPA Sydney News at 2:51 PM