This statement has been written by West Papuan Independence Leader Benny Wenda after Indonesian police officers brutally tortured Nareki Kogoya from the National Human Rights Commission.
It brings more heartache, tears and sadness for the people of West Papua to learn that another innocent West Papuan person has been brutally tortured by the Indonesian police. Nareki Kogoya is a well known West Papuan human rights commissioner working for the National Human Rights Commission (KOMNAS HAM).On 18th May, his house was searched by the Indonesian police who tortured him until he was covered in blood, drove him to the police station and interrogated him. He was then told that if he reported his ordeal, he would be charged. This horrible torture of a very well known human rights figure in West Papua shows that the Indonesian police and military have no respect for West Papuan human rights whatsoever.
They look upon us as subhuman because of the colour of our skin. We are not animals, we are West Papuan people.
This is a man who actually represents West Papua in the Indonesian National Human Rights Commission. If this is how representatives of government agencies are treated in the capital city of West Papua, what about ordinary people? What about activists? What about the people in the villages whose stories never get told, who are killed by the Indonesian military and police like animals with no media attention?
In West Papua, it doesn’t mater if you are a peaceful protester, a journalist, a human rights commissioner or an ordinary person on the street; anyone can be the next person to be arrested, tortured and killed by the Indonesian military and police.
We need to urgently alert the world. This is what Indonesia’s so called “democracy” looks like in colonial, occupied West Papua. There is no democracy for the people of West Papua and nor will there ever be until we are allowed to freely exercise our fundamental right to self-determination in an Internationally Supervised Vote. Our strengthen and resolve for this fundamental right only grows stronger every day. People living under colonialism never experience true democracy until they are free.
I must state that all that the Indonesian government has claimed about human rights and democracy in West Papua is FALSE and everything that they have claimed about resolving past cases in West Papua is FALSE. Every day, West Papuan people are persecuted and have our human rights violated by the Indonesian government. Over 500,000 people have already been killed in this Neglected Genocide.
The torture of Nareki Kogoya then, is more evidence that the Indonesian government is not complying to the United Nations Universal Declaration of Human Rights. There is no freedom of expression, freedom of press or freedom of assembly; there is NO freedom in occupied West Papua.
On behalf of the people of West Papua, I appeal to the world and people everywhere including at a parliamentary level to urgently please look to the deteriorating human rights situation in occupied West Papua and to immediately Take Action to help to stop this ongoing Neglected Genocide.
If the Indonesian government is serious about human rights in West Papua, they must allow full access to human rights inspectors, foreign journalists and other international observers. We want to live as good neighbours with Indonesia when we are free. If the Indonesian government is serious about peace, democracy and international law, they MUST allow the people of West Papua to exercise our fundamental right to self-determination in an Internationally Supervised Vote.
We desperately need more international support before it is too late. Please support the people of West Papua and our fundamental right to self-determination.
Benny WendaWest Papuan Independence LeaderSpokesperson for the United Liberation Movement for West Papua (ULMWP)
———————————————-
A google translate. Be-aware google translate can be a bit erratic.
Original bahasa link at
http://tabloidjubi.com/artikel-6530-polda-papua-media-abalabal-sengaja-bikin-jayapura-kacau.html
2) Papua Police: Media abal-abal deliberately make Jayapura chaotic
Jubi | News Portal Tanah Papua No. 1 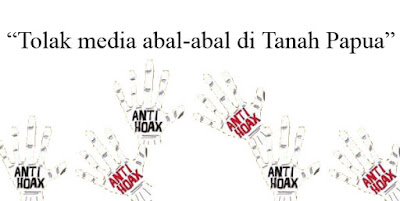 Illustration of abandoned media repulsive in Papua - Doc / Jubi
Jayapura, Jubi - Papua Police (Polda) affirmed there are a number of online media abal-abal deliberately spread the issues that provoke the community. News spread about the burning of the Bible, declared not true but has been disseminated through social media, resulting in unrest residents.
This was affirmed by Head of Public Relations of Papua Police, Kombes Pol. A.M. Kamal is associated with provocateurs and spreaders of the biblical burning issue in Jayapura. He said the spreaders of the issue had been arrested.
"This (papuanews.id) hoax. There are (people) who deliberately make Jayapura not conducive, "explained Head of Public Relations of Papua Police, Kombes Pol. A.M. Kamal to Jubi via short message, Friday, (05/26/2017).
According to Kamal, until now his side is still doing the development and investigation of who the provocateer to lead to violence that resulted in three residents, including Victor Pulanda, Edi Siep and Alvian Ukago hit bullets. Meanwhile, Jayapura Police Chief, AKBP. Tober Sirait and his aide were hospitalized for being thrown from the masses.
"The perpetrators (provocateurs) we have not caught, still doing the investigation. Media (papuanews.id) was deliberately wanting provocation between us-us, "he said.
Separately, the holder of the Press Release Certificate from the Press Council in Papua, Victor Mambor reminds the public that more and more online media in Papua is irresponsible, and the public needs to know that the press and media have standards set by the Press Council.
The press company, according to the responsible Jubi Newspaper and tabloidjubi.com, shall be obliged to announce the editorial structure of which is the name, address and responsible person openly through the media concerned.
"Especially for print media plus the name and address printing," he said.
It is said, the announcement is intended as a manifestation of responsibility for published or published journalistic work. If there is a media that does not announce the composition of the editorial and management of the company, he said, the media is not clear because they do not want to be responsible for the content.
"If you spread articles from media that can not meet this standard. So when you are accused of being a hoax spreader or violator of the ITE Law, you will be taken to the criminal realm, not the press field! So, be careful spreading the news from the online media is not clear, "said Victor Mambor. (*)
———————————————————
A google translate. Be-aware google translate can be a bit erratic.
Original bahasa link at
http://tabloidjubi.com/artikel-6526-dinilai-hanya-untuk-pencitraan-diplomasi-mahasiswa-papua-di-yogya-tolak-undangan-kemenlu-.html
3) Judged only for diplomacy imagery, Papuan students in Yogya reject the invitation of the Ministry of Foreign Affairs
Jubi | News Portal Tanah Papua No. 1, 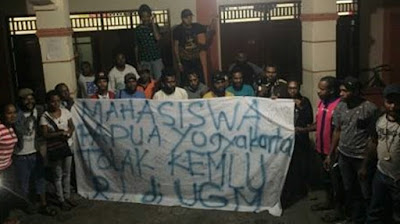 Papuan students who are members of IPMA Papua and AMP rejected Kemenlu RI present in Yogyakarta - IST
Jayapura, Jubi - Papuan students studying in Istimewah area of ​​Yogyakarta (DIY) refused to attend the Papuan Student Role-themed Discussion in Enhancing Positive Images of Indonesia Overseas organized by the Indonesian Ministry of Foreign Affairs, the Directorate of Diplomatic Security and the Directorate General Information and Public Diplomacy on campus of Universitas Gadjah Mada (UGM), Wednesday (24/5/2017).
According to BPH, Student Student Association (IPMA) Papua, Aris Yeimo, strongly rejects the arrival of the Minister of Foreign Affairs of Indonesia to UGM as it is only taking advantage of time for diplomacy abroad, especially before the United Nations.
"In the invitation letter was invited not all the students in Yogya, but only from the representatives of the rector of UGM campus, Yogyakarta State University (UNY), Duta Wacana Christian University (UKDW), Veteran University of National Development (UPN), Atma Jaya University (UAJY) and Ahmad Dahlan University (UAD), five from each of the six campuses which became one of the 'political interests' of Indonesia through the Ministry of Foreign Affairs, "Aris Yeimo said in a written statement sent to Jubi on Wednesday, (24/5/2017).
The interest he said, is inseparable from Indonesia's kotraversi through the Ministry of Foreign Affairs to the United Nations and several major countries in the world and seven Pacific nations who speak loudly about Indonesia's decay, including human rights abuses, access to restricted foreign journalists, exploitation of natural resources in Papua and others, Another in Tanah Papua, a month ago.
"Indonesia in the eyes of the world has become a violator of human rights. (And) These things Indonesia is even willing to hide," he said.
While the Chairman of the Student Alliance of Papua (AMP) Yoyakarta City Committee, Mikael Kudiai rejected the activity because it is considered illegal and does not represent all the people of Papua.
"We reject the utilization and (only) Papuan student apparatus from the six campuses, we also request that military intervention on campus be stopped," said Kudiai.
According to Kudiai, the Indonesian Ministry of Foreign Affairs has often conducted public deception and transfer of Papua issues in the international world especially related to human rights violations that occurred in Indonesia, especially in Papua. (*)
————————————-
Posted by AWPA Sydney News at 2:29 PM