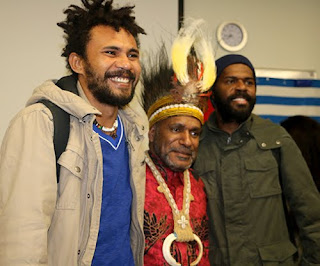 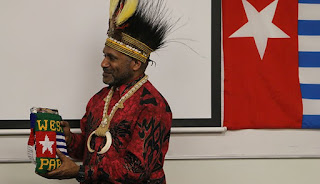 New Zealand support soughtWenda is calling for the New Zealand government’s integral commitment to the campaign for a free West Papua.
He said this was because New Zealand had a duty, as a part of the Pacific, to raise awareness of the atrocities in West Papua.
“West Papua is a very close neighbour, so that’s why I hope the New Zealand government will speak more about the human rights situation in West Papua.”
Wenda said it was high time for New Zealand to pull away from its business, trade and investment focus with Indonesia and speak about Indonesia’s human rights abuses.
New Zealand “needs to do more” as a country, he said, because New Zealand is a country which is meant to value human rights, respect the rule of law, freedom of speech and the right to self-determination in other parts of the world.
It is therefore time for New Zealand’s foreign policy on West Papua to change.
“West Papua’s hope is Australia and New Zealand. This is a regional issue, this will never go away from your eyes and this is something you need to look at today. Review your foreign policy and look at West Papua.”
‘We are the gatekeepers’“Australia and New Zealand need West Papua. We are the gatekeepers, and for security reasons, West Papua is very important,” Wenda said.
Catherine Delahunty, a Green Party MP who has campaigned strongly for West Papua on New Zealand’s political front, echoed Wenda’s views.
“They are insistent – the New Zealand government – that West Papua is part of the territorial integrity of Indonesia, so we can’t get past that critical issue.”
She said she therefore did not have much faith in the current government to step up and was looking for future leadership, such as through the Labour-Greens alliance, to move the campaign for West Papuan self-determination forward on the home front.
“I really do think we need a different government that actually has some fundamental commitment to human rights over and above trade and being part of the US military complex around the world. We have to have change to get change. It’s not going to happen through these guys.”
In her eight years in Parliament, Delahunty said the situation in West Papua was the toughest she had had to face.
“This issue, for me, has been one of the most disturbing things I’ve ever worked on. It’s been one of the most horrible and one of the most powerful examples of the cynical use of power and the way in which people can just completely close their eyes.”
Mainstream media roleBoth Wenda and Delahunty said in light of the resounding silence surrounding West Papuan media freedom during Indonesia’s hosting of World Press Freedom Day last week that raising awareness of West Papua was key for the world to finding out about the atrocities there.
The mainstream media had a large role to play in this, both acknowledged.
“West Papua really needs the media in terms of the publicity. Media publicity is very important,” Wenda said.
Wenda said it was time for New Zealand’s mainstream to pick up the baton from smaller, independent news agencies and carry stories of West Papua’s atrocities themselves.
“I really hope the mainstream media here carries this. It’s very important. We need more mainstream media. They really need to pick up on this issue.”
Paris-based Reporters Without Borders (RSF) has reported that it was not unusual for both local and foreign journalists in West Papua to be threatened anonymously or by authorities. Data by the Alliance for Independent Journalists (AJI) has revealed there has been an increase in the number of assaults on journalists in the region over the past two years.
There were 78 violent attacks on journalists in 2016, up from 42 attacks in 2015 and 40 in 2014.
The AJI found only a few attackers from those 78 attacks had been brought to justice.
Only last week, independent photojournalist Yance Wenda was arrested and beaten by police while covering a peaceful demonstration, prompting condemnation from RSF that Indonesia was ‘double-dealing’ over media freedom.
‘Everything swept under the carpet’Wenda said there was deep-seated inaction on Indonesia’s part because of its prejudice in prosecuting people who have attacked and tortured and beaten both West Papuans and also West Papuan journalists.
“Indonesia is getting away with impunity. Nobody is brought to justice. Everything is swept under the carpet.”
Delahunty reflected, however, that the world was seeing the lack of free and frank reporting play out in West Papua.
“We see the consequences of nearly fifty years of no honesty about West Papua and it’s just up the road. It breaks my heart, but it also fires me up because I really believe there are some very, very brave young people, including journalists, who are committed to this issue and I guess it’s that thing: if you have a voice, use it.”
This was Wenda’s call to an audience gathered at his talk at the Pacific Media Centre-hosted Auckland University of Technology on Tuesday evening.
“Today you are the messengers for West Papua.”
Wenda highlighted a “united” Pacific was key in raising awareness of the “Melanesian genocide” occurring in West Papua. 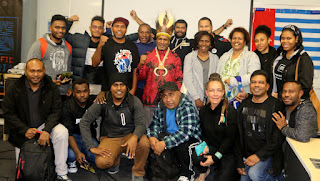 Benny Wendy with wantok students…representing a “united” Pacific for West Papua. Image: Del Abcede/PMC
‘United’ Pacific keyHe called on his “brothers and sisters”, but was deeply thankful of the support given already by several Pacific nations for West Papua’s cause.
These nations raised grave concerns regarding human rights violations in West Papua at the 34th session of the United Nations (UN) Human Rights Council in March.
Recent declarations by both the Solomon Islands and Vanuatu were also acknowledged by Wenda.
“We cried for 50 years, but then these countries sacrificed to take on this issue.”
Wenda told the Solomon Islanders and the people of Vanuatu gathered they should “be proud” and that their action was something to “take away in your head and heart”.
Wenda also told the remainder of his audience it was “ordinary people” and “mostly young generations” who were needed to continue the fight, with social media being their greatest tool.
Delahunty added people power and the growing solidarity movement across the globe were also central.
“The only way they’ll speak and respond to this issue at all is if we have growing public pressure and that’s the job of all of us, both inside parliament and outside parliament to raise the issue and to make it something people will feel accountable for, otherwise we just ignore the plight of our neighbours and the killing, torture, environmental desecration and human rights abuses continue.”
Wenda and Delahunty both closed their interviews with a clear message for Indonesia: “Start talking, start listening, and stop thinking that you can ever brow beat people into the dust because you want their resources because in the end, the human spirit doesn’t work like that and these people will never give up. It’s up to us to support them.”
Kendall Hutt is contributing editor of Pacific Media Watch. 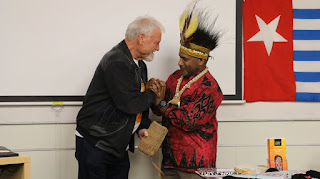 ————————————
http://www.radionz.co.nz/international/pacific-news/330553/west-papuan-leader-sees-solidarity-grow-in-nz
2) West Papuan leader sees solidarity grow in NZ
1:19 pm today
International support for West Papuan self-determination cause is growing, according to a Papuan independence leader.
Benny Wenda is in New Zealand this week, raising awareness about the Indonesian-administered region of Papua, or West Papua, which he fled in 2003
Last night in Wellington he addressed a group of MPs, including ten who signed a declaration by the International Parliamentarians for West Papua.
This international organisation of MPs is calling for an internationally supervised self-determination vote in Papua. 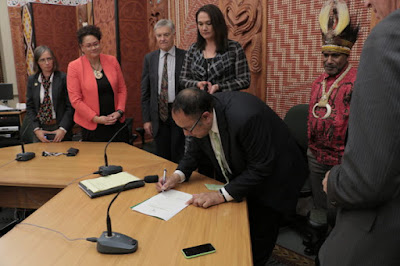 New Zealand MPs sign the International Parliamentarians for West Papua declaration as Benny Wenda the head of the West Papua Freedom Movement looks on. Wellington 10-05-2017. Photo: RNZI/ Koroi Hawkins
Mr Wenda said momentum was being driven by the Pacific Coalition on West Papua, chaired by the Solomon Islands prime minister Manasseh Sogavare.
"So the Manasseh Sogavare leadership is bringing a big impact on the West Papua issue. And the seven countries (of the coalition) I joined. It is bringing the West Papua case in United Nations level," he said.
"So this is a big thing to change now. So we also got support from African, Carribean and the Pacific. So this is a growing number and solidarity around the world."
Mr Wenda said West Papuans as a people had been through many grave challenges in the last five decades of Indonesian rule, but that they remained ever hopeful.
A growing solidarity network in the Pacific was giving them hope.
"The parliamentarians today.... Catherine Delahunty (New Zealand Green Party MP) lead a lot of MPs, bringing them in to sign their support.
"This is the best medicine, I think, for the people of West Papua. That’s why their spirit is alive even (though) they're suffering under the Indonesian illegal occupation." 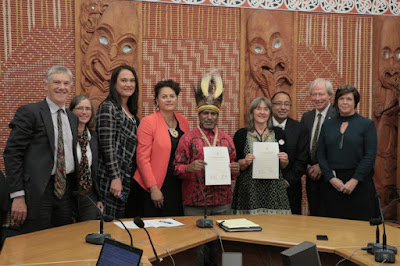 New Zealand MPs pose with the West Papua Freedom Movement's Benny Wenda after signing the International Parliamentarians for West Papua Declaration. Photo: RNZI/Koroi Hawkins
According to Mr Wenda, West Papuans were united under the United Liberation Movement for West Papua.
Indonesian government officials have characterised the Liberation Movement as a group of Papuans living abroad, out of touch with recent changes in the region.
Mr Wenda dismissed this, pointing out that the leadership of the Liberation Movement is based both in and, out of necessity, outside Papua.
West Papuan grassroots support for the organisation within Papua was massive, he said.
Posted by AWPA Sydney News at 8:11 PM