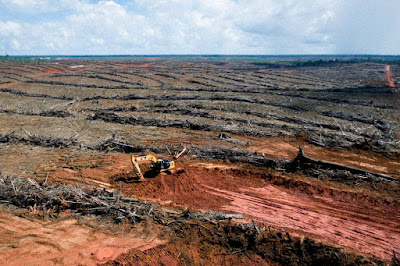 Widespread land clearing in a Korindo-owned PT Papua Agro Lestari concession in Papua, Indonesia. Image: Mighty
By Vaidehi Shah Friday 19 May 2017
In its latest salvo against Korean-Indonesian conglomerate Korindo, American environmental group Mighty Earth on Monday filed a complaint to sustainability certification body Forest Stewardship Council (FSC), arguing that Korindo’s activities have violated FSC’s rules. The complaint claims that Korindo-owned pulp and paper companies should lose their FSC certification because the group, through its palm oil operations have violated a key FSC rule: That companies are prohibited from clearing more than 10,000 hectares of forest under the organisation’s responsibility, over a five-year period.
Mighty said that the Korindo group has actually cleared some 30,000 hectares of forest in the past five years, a claim that is supported by a report by Dutch non-profit Aidenvironment, as well as photographic and satellite evidence.
Korindo has also cleared at least 11,700 hectares of primary forests since 2013, said Mighty Earth. Primary forests are considered to have a high conservation value, and clearing them is against FSC rules, officially known as the Policy for Association. Thanks to these violations, four Korindo subsidiaries stand to lose their FSC certification. They are: PT Korintiga Hutani, PT Aspex Kumbong, PT Korindo Abadi Asike, and PT Korindo Ariabima Sari. These companies sell products ranging from timber to pulp logs, wood panels, and paper. Losing the certification would mean that Korindo cannot sell to potential clients such as the organisations working to ensure that only FSC-certified wood is used in building facilities for the 2020 Olympics in Tokyo, Japan. Deborah Lapidus, campaign director, Mighty Earth, said that “Korindo has not earned the good reputation that comes along with holding FSC certification, and has violated the trust of its wood product customers who believed that the certification brought assurances of sustainability.”
“We call on the FSC to fully investigate Korindo’s violations of the Policy for Association, and take steps to terminate Korindo’s FSC certificates until it strictly complies with its standards,” she added. Mighty Earth, in partnership with Korean and Indonesian groups, first exposed Korindo’s forest clearing activities in Indonesia’s remote Papua province last September, finding about 30,000 ha of deforestation as well as more than 900 hotspots on satellite data, which suggested that fire was being used to clear land. This practice is illegal in Indonesia, except for small-scale use by rural farmers. In response to public pressure, Korindo declared a moratorium on clearing new forest for palm oil in December last year, but Mighty Earth found that the company had violated this commitment by preparing land for forest clearance in remote areas of Papua.

We call on the FSC to fully investigate Korindo’s violations of the Policy for Association, and take steps to terminate Korindo’s FSC certificates until it strictly complies with its standards.
Deborah Lapidus, campaign director, Mighty Earth

To date, Mighty Earth said that Korindo has yet to submit data for independent sustainability reviews of its operations, and it has also not adopted a group-wide policy on zero deforestation and human rights protection.
Lapidus explained that though Korindo’s palm-oil linked deforestation was uncovered back in September and the company has showed slow progress since, it took several months to mount the FSC complaint due to difficulties in establishing that the palm oil firms and FSC-certified paper companies had common majority ownership. This is crucial to make a valid case to FSC.
“Korindo is purposely an extremely opaque company, which is makes it so difficult to find the truth about its operations,” she told Eco-Business. A Korindo representative said that the company had not been contacted by FSC, and therefore could not comment directly on the complaint. However, the spokesperson pointed out that the four pulp and paper companies have adopted various measures to comply with government regulations and be sustainable. PT Korindo Ariabima and PT Korindo Abadi Asikie for instance have applied for a certification known as the SVLK Timber Legality Verification, which ensures that wood products are not illegally harvested; while PT Aspex Kumbong makes paper from recycled wastepaper, and doesn’t use any wood to do so. The spokesperson also told Eco-Business that as part of Korindo’s sustainability policy, it does not develop, or plan to develop on peat; conducts third-party audits for High Conservation Value and High Carbon Stock areas in its operations; and respects the rights of indigenous communities.
However, there is little public information to verify these claims. For instance, while several Korindo-owned palm oil companies were implicated in Mighty Earth’s expose–including PT Tunas Sawa Erma (PT TSE), PT Gelora Mandiri Membangun (PT GMM), and PT Papua Agro Lestari–the HCV Resource Network, which hosts a public record of HCV assessments by licensed auditors, only has records of an official assessment from PT TSE. The status of this assessment is “not ready for Quality Panel review”, and it has been returned to assessors for corrections. Meanwhile, all three companies, along with Korindo subsidiary PT Dongin Prabhawa, have completed High Carbon Stock assessments, and these are awaiting peer review.  Mighty Earth’s Lapidus told Eco-Business that by doing these sustainability assessments before adopting a company-wide zero deforestation policy, “Korindo is putting the cart before the horse”, as it is not clear why they are conducting these assessments, and whether they will do so with integrity.  She also pointed out that the company’s choice of assessors from the Bogor Agricultural Institute is controversial, as the organisation recently published, in Lapidus’s words, an “absurd” study which claims that palm oil does not cause deforestation.  FSC has until May 25 to acknowledge Mighty Earth’s complaint, and another 10 days to confirm the acceptance or rejection of the complaint. If accepted, it will then establish a complaints panel to investigate the matter.  At the time of publication, FSC had not provided responses to Eco-Business on whether FSC was aware that the certified Korindo subsidiaries were indirectly linked to deforestation, and the next steps it would be taking.
---------------------------------

Posted by AWPA Sydney News at 1:57 AM