1) Papua remains restricted under Widodo; 72 cases of violence against journalists

2) Jokowi Visits Papua More Frequent than Other Regions
—————————————
https://www.ifex.org/indonesia/2017/05/19/papua-remains-restricted/
1) Papua remains restricted under Widodo; 72 cases of violence against journalists
Aliansi Jurnalis Independen/Alliance of Independent Journalists 19 May 2017
This statement was originally published on aji.or.id on 3 May 2017. 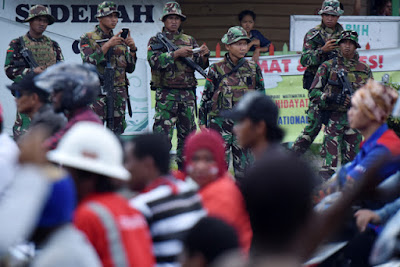 Antara Foto/Wahyu Putro A/via REUTERS
Indonesian soldiers watch as workers and contractors from the PT Freeport mining company travel in a convoy during a rally commemorating May Day in Timika, Papua province, 1 May 2017
Two cases of violence against journalists in Papua in the past week highlight the empty promise of Press Law protections in Indonesia's easternmost province, as well as the false hopes of President Joko Widodo, who more than two years ago promised to open foreign press access to the area. Censorship remains the norm in the province, where many foreign journalists are still forbidden from entering.
On May 1, 2017, police in Jayapura, Papua, assaulted Yance Wenda, a local journalist who works for Jubi daily and tabloidjubi.com, while he was covering the arrest of activists of the West Papua National Committee (KNPB).
Police arrested the KNPB activists, often labeled as a separatist group, during a May 1 rally (annually held to reject the integration of Papua into Indonesia which happened on May 1, 1963). Police beat Mr. Wenda with a rattan stick on the scene, then took his bag and forcibly detained him. Mr. Wenda suffered injuries to his eyes, head and back.
Three days before that, on April 28, three television journalists from Metro TV, Jaya TVand TVRI experienced intimidation while covering a trial in Wamena District Court. An unknown group of visitors surrounded them, questioning them and forcing them to delete their footage of the trial. Police witnessed the entire incident but didn't intervene.
Violence and intimidation against journalists remain facts of life in Papua. Government censors block news sites that are critical of the government, and foreign journalists are banned from traveling freely throughout the region.
Throughout 2015 and early 2016, only 15 foreign journalists were granted access to Papua, according to the Alliance of Independent Journalists (AJI) Jayapura chapter. Radio New Zealand International journalist Johnny Blades needed three months to get his visa approved to enter Papua, and was denied a response by the police and military for his story, according to tabloidjubi.com. Radio France journalist Marie Dumieres was closely monitored by the police when she was working on her story in the province.
In March, Franck Jean Pierre Escudie and Basille Marie Longchamp, journalists for The Explorers Network, were deported. Jack Hewson, a freelance journalist for outlets like Al Jazeera, was told by immigration officers that he would need to "e-mail the military" if he wanted to re-enter Indonesia, because his passport had been "blacklisted." The only reason Mr. Hewson could think of for such treatment was his letter to the President's Executive Office asking for a clarification of policy for his travel plans to Papua. President Widodo's promise to open access to the region for foreign journalists has proven to be an empty one.

Papua is the most vivid example of how poorly enforced the 1999 Press Law is - especially in the protection aspect - but its weakness is seen across the country. In the 12 months to April 2017, the Alliance of Independent Journalists (AJI) Indonesia recorded 72 cases of violence and intimidation against journalists, including 38 incidents of physical assault. In nine cases, journalists were forced to delete their photos or footage. Two legal cases were brought against journalists, including one filed by the United Indonesia Party (Perindo, a new political party founded by media mogul Hary Tanoe) legal team against Tirto.id.
Assaults by civilian on journalists also rose in the past year (21 cases, see tables provided by AJI). The growing trend of assaults involving civilians is the result of an absence of law enforcement. Police officers, whose duty is to protect all citizens, not only turn a blind eye to violence against journalists, but, in many cases, are the perpetrators themselves.
Impunity remains, especially when it involves the police or military, as seen in the physical assault of journalists by members of the Air Force at Soewondo airbase, Medan, North Sumatra, August 15, 2016. The case hasn't been seriously handled, and the perpetrators are free from punishment. Such practices have contributed to the general ignorance among the public of the protections accorded to journalists by Indonesian law.
AJI Indonesia sees that Indonesian press freedom has been increasingly threatened, which could be the beginning of a threatened democracy. Therefore:
1. AJI declares the police the 'enemy of the press' in 2017, with many of their personnel involved in cases of violence against journalists and impunity.
2. AJI urges the enforcement of protections for journalists under Press Law No.4/1999 across the archipelago, especially in Papua. We urge national and local authorities to put an end to acts of violence, intimidation, restriction, surveillance and censorship.
3. AJI demands President Joko Widodo to honor his promise to open media access to Papua, to allow local and international media to enter and report on the province, in the hope that the world will get a complete picture of its political, economic, social and cultural situation.
4. AJI calls on the police and military to immediately stop any acts of violence against journalists. They also have to investigate and punish personnel involved in such cases, especially those that happened in Papua, Medan, and Bangkalan, East Java.
5. AJI urges all elements of the community to protect freedom of the press and of expression, and to protect journalists for the sake of Indonesia's democracy and human rights.
Jakarta, 3 May 2017
AJI Indonesia
Arfi Bambani
Secretary General
Suwarjono
President
—————————————————-
https://en.tempo.co/read/news/2017/05/19/055876948/Jokowi-Visits-Papua-More-Frequent-than-Other-Regions
FRIDAY, 19 MAY, 2017 | 22:00 WIB
2) Jokowi Visits Papua More Frequent than Other Regions
TEMPO.CO, Timika - Papuan public figure Michael Manufundu expressed his appreciation for President Joko Widodo or Jokowi who showed his commitment to opening access to Papua’s most isolated locations by crafting a number of infrastructure development programs.
Manufundu said that the President’s attention towards Papua must be cherished by all people in the region.
“The people of Papua must appreciate what the President has done for the development in Papua,” Manufundu said on Friday, May 19, 2017. “The Papua administration must work hand in hand with the the central government to improve the welfare of Papuans.”
The Former Indonesian Ambassador to Columbia said that President Jokowi is the only president in the history who frequently visits Papua. Manufundu added that the frequency of President Jokowi’s visit to Papua is even higher than to other regions in Indonesia.
“All regions that were isolated for decades are now more accessible so that residents of rural areas who live near mountain slopes, swamps, and valleys can travel more,” he said.
Manufundu believes that President Jokowi’s development programs in Papua have a huge impact on the lives of indigenous Papuans.
“Therefore, we highly appreciate the government’s commitment to building infrastructures in Papua,” Manufundu said.
ANTARA
—————————————-
Posted by AWPA Sydney News at 1:57 PM