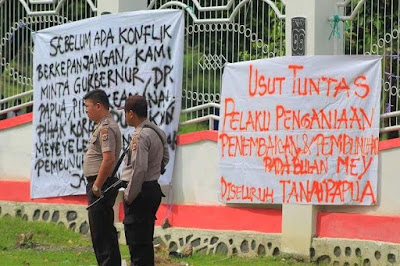 Banner from peaceful protest actions of Uncen Students to demand a just investigation to various murders and shooting in Jayapura Monday (May 22) – Jubi/Agus Pabika
Jayapura, Jubi – Inhabitants of the Cenderawasih University (Uncen) student dormitory in Waena, Heram District, Jayapura City admitted experienced post trauma from sweeping and shooting by police officers on Friday (May 19) and Saturday (May 20).
Chairman Uncen Student Executive Board, Paskalis Boma condemned the actions of security apparatus who shot boarding dweller unit III, Matthew, just because they blocked cars on th eroad to ask for money to buy cigarettes, while victim did not fight.
“The police responded that they (the victims) were taking action against the police in the case of Friday night in sawmil and in front of RS Dian Harapan, so without compromise and through law procedure they attacked five boarders, and one was hit,” he said to Jubi, Monday night (May 22).
According to him Uncen dormitory is inside the campus area and the police do not have right to casually enter the area to conduct sweeping and shooting.
“The authorities must understand their duties and their tasks. This incident is a threat to Uncen students and residents, so the governor and DPRP should see this, because we are disturbed by the arrogant attitude of the security forces,” he said.
Vice chairman of Uncen Rusunawa hostel, Elius Wenda said after the incident students feel traumatized.
“The case yesterday has nothing to do with the killing of 6 people at some point in the city of Jayapura. From here we can see the apparatus is inconsistent with his duty in protecting the community,” he said.
Uncen Rusunawa dormitory chairman, Agus Mosip claimed to be disappointed with the actions of officers who did the shooting.
Agus also rejects the stigma that calls Uncen’s dorm as a place of commotion and accommodates uneducated people. (*)
—————————————————
http://tabloidjubi.com/eng/elsam-transmigration-environment-militarization-marked-papua-development/
2) ELSAM: TRANSMIGRATION, ENVIRONMENT AND MILITARIZATION MARKED PAPUA DEVELOPMENT
AdminMay 26, 2017 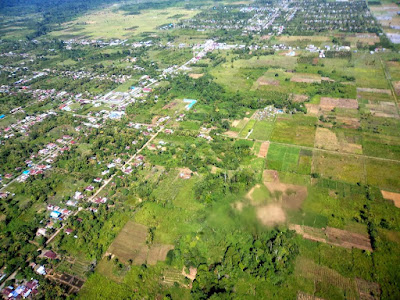 Ilustration of transmigration area in Nabire Regency – IST
Jakarta, Jubi – The Indonesian government needs to change the policy of development which makes Papuan community a subject, says a non-government organization that specialises in West Papuan development issues.
This has emerged in the launch of research results and discussion “From Decolonialisation to Marginalisation: Portrait of Government Policy in Tanah Papua for the Last 46 Years” held by ELSAM in Jakarta May 18 2017.
Research coordinator on Papuan issues Budi Hernawan said that the research focused on three issues — demographic changes in Papua and the impact of development policy, environmental degradation, and militarization.
ELSAM provided several recommendations related to the three issues.
According to the coordinator of information and documentation of ELSAM, Ari Yurino, the transmigration programme in Papua has evidently brought negative impact to the social life of Papuan natives.
Due to the uneven transmigration and development programme, it has caused the increase of the number of migrants in Papua and the rise of conflict between the newcomers and the indigenous Papuans.
The transmigration programme must be terminated and its policy must be evaluated, Yurino said.
‘Alternative solution’
“As an alternative solution of regional development, the national government should facilitate the cooperation among regions to strengthen the local government in order to be able to seek for autonomous development,” he said.
One of the recommendations to the local government, he added, was to also formulate Perdasi (Provincial Regional Regulations) and Perdasus (Special Regional Regulations) which would encourage the assimilation of the migrants into Papuan culture through formal and informal education.
Meanwhile, in the context of environmental degradation, ELSAM’s programme staff, Kania Mezariani, said the national government needed to urgently conduct environmental auditing on all national scale projects in Papua, especially in the plantation and mining sectors.
According to her, those two sectors often became the triggers of conflicts, both locally and nationally
“The national government should focus on economic development which directly connects to the peoples’ needs,” she said.
Mezariani added that the local government should establish spatial planning in Papua and West Papua provinces in order to guarantee the life space of the indigenous Papuan people, especially related to the domination of the rainforests and lands of Papua.
‘NZ-aided community police’
Also the coordinator of human rights defenders capacity building of ELSAM, Mike Verawati, spoke about the importance of reviving community police in Papua.
“In Java, such a pattern is applied. Previously, the community police was run — through assistance from the Netherlands and New Zealand police institutions — quite successfully.
“That project should be run again. The government officers assigned in Papua should also receive the briefing about anthropology in order to understand and use the approach in accordance with Papuan characteristics,” she said.
Other than that, she also called on the national government to terminate the extension of authority to the Indonesian National Army over the defence role as specified in Law No 34/2002 on Indonesian National Army.
Budi Hernawan saisd ELSAM also urged Komnas HAM and the Attorney-General to immediately complete the documentation of human rights violations cases in Papua.
Hernawan added that local government must immediately establish a human rights protection instrument, especially like the Regional Commission on Human Rights, Human Rights Court, and Truth and Reconciliation Commission in Papua and West Papua, as mandated by Law No 21/2001 on Special Autonomy.(*)
Source  : asiapacificreport.nz
Editor    : Zely Ariane
————————————————
http://tabloidjubi.com/eng/lng-bp-indonesia-accused-public-deception/
3) LNG AND BP INDONESIA ARE ACCUSED OF PUBLIC DECEPTION
AdminMay 26, 2017 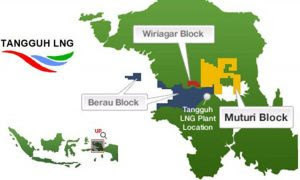 LNG Tangguh of BP Indonesia is accused of public deception – IST
Sorong, Jubi – Chairman of the Customary Law Community Forum ofseven indigenous tribes in Teluk Bintuni, Yohanes Ateta accused Tangguh LNG and BP Indonesia conducted a public deception about the perpetual flow of funds channeled through the Dimaga Foundation as submitted by BP. Indonesia to indigenous communities in the region.
“We never saw the foundation, where it flows and on behalf of whom?” he told Jubi in Sorong, Tuesday (May 23).
He mentioned some time ago that seven tribes’ people were protesting because they did not achieve their right from BP Indonesia.
He also said that the employment of workers for Train 3new operation of Tangguh LNG in Tanah Merah of Bintuni Bay Regency ignore the indigenous people in the area.
Separately, Vice President Communications and External Affairs Staff of BP Indonesia, Wigra promised to send response from BP Indonesia. But up to this news written there has been no official response from BP.
Earlier, the Vice President Communications and External Affairs of BP Indonesia, Desy Unidjaja said that in addition to cash payments compensation, BP would also provides compensation in form of endowment funds.
It is expected to be a source of funds to the three clans to help support their welfare. The endowment fund management and development is done through Yayasan Dimaga. The Foundation is said will coordinate the three clans to manage the benefit.(*)
—————————————————
http://tabloidjubi.com/eng/97-93-percent-businesses-papua-small-micros-sector/
4) 97.93 PERCENT OF BUSINESSES IN PAPUA ARE SMALL AND MICRO’S SECTOR
AdminMay 26, 2017
Jayapura, Jubi – The Small and Medium Enterprises Sector (UMKM) still dominates businesses in Papua together with non-agricultural companies. The number reaches 97.93 percent or as many as 150,122 out of 153,296 businesses.
While large scale enterprises business (UMB) is only 2.07 percent or about 31,174 businesses.
This is explained explained in 2016 Papua Economic Census by Statistic Bureau (BPS) Head, Simon Sapari during a press conference at Papua BPS office, Wednesday (May 24).
The census held by BPS every 10 years and took place in May-June 2016, recorded an increase in business in Papua by 34.43 percent or 153,296 from 2006 which was 114,035 businesses.
Sapari said that the distribution of business/company based on indigenous territory in Papua generally shows that most of the businesses/enterprises (31.13 percent) are in Mamta customary territory with 47,721, and Saireri with percentage of 22.19 percent.
The census also noted that 190,031 or 39.13 percent labor force are absorbed in large and retail trade businesses. While 31.42 percent of workforce in Papua absorbed in 11 categories of other business fields, such as food and beverage business (10.42 percent), construction (9.70 percent), and education (9.31 percent). (*)
————————————————————

Posted by AWPA Sydney News at 1:21 AM