1) INDONESIA: PAPUAN ACTIVIST CHARGED FOR POSTING FB VIDEO
7 September 2018, Index number: ASA 21/9048/2018
A peaceful pro-independence Papuan activist, Agustinus Yolemal, was detained and charged for posting a video on Facebook. He was charged with “disseminating hostility against the state ideology” under the Law on Electronic Information and Transaction. If convicted, he would face a penalty of up to six years’ imprisonment. He is a prisoner of conscience and should be immediately and unconditionally released.
Choose a language to view report

https://www.amnesty.org/en/documents/asa21/9040/2018/en/
2) INDONESIA: AUTHORITIES MUST STOP THE CRACKDOWN ON PUBLIC EVENTS AND PEACEFUL ASSEMBLIES
6 September 2018, Index number: ASA 21/9040/2018
Amnesty International is concerned about attempts by the Indonesian authorities over the last few weeks to ban public events and peaceful assemblies relating to the political opposition’s campaign to call for the public to select new president in the next year election. These actions are a violation of the rights to freedom of expression and peaceful assembly. The government of Indonesia must immediately end all forms of unlawful restrictions on public discussions and peaceful assembly organised by the political opposition.
View report in English
DOWNLOAD PDF
-------------------------------
http://tabloidjubi.com/eng/legislator-urges-pt-bia-inti-agrindo-to-stop-cheating/
3) Legislator urges PT BIA Inti Agrindo to stop cheating 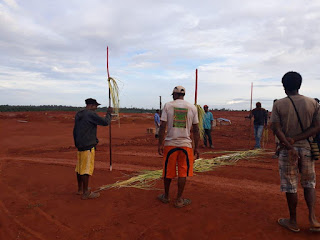 Merauke, Jubi – Regional Representative Council (DPRD) of Merauke District speak up after people’s action to block the location of a planned palm oil factory owned by PT BIA Inti Agrindo.
“I fully support the landowners, because it is their rights after the company ignored to listen to them,” said a local legislator of Merauke District Hendrikus Hengky Ndiken on Thursday (08/30/2018).

Further, he reminds the company to not cheating on people. If the community blocks their land, the company must respect and should not obstruct it.
Meanwhile, a member of Papua People’s Assembly (MRP) John Wob stress that MRP would bring the results of the visit in Muting sub-district to the plenary meeting of MRP.
“It recommends that the palm oil factory must be stopped because if it operates, the company will discharge their waste automatically into the Kouw River. It is sure that the water, which is the source of the community’s livelihood, would be polluted.” (*)

4) JOINT STATEMENT: CALL FOR IMMEDIATE RELEASE OF SIMON MAGAL AND JAKUB SKRZYPSKI - The West Papuan and Polish pair have been charged with treason