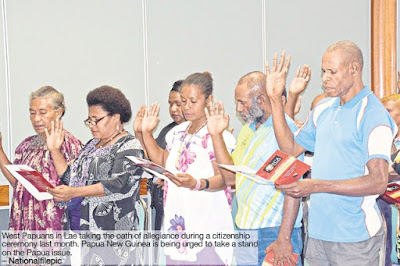 NATIONAL Capital District Governor Powes Parkop has called on Foreign Affairs and Trade Minister Rimbink Pato not to shy away from discussing the West Papua issue on the international stage. “It is important that we talk about the West Papua issues with the Indonesian Government and at the international forum,” he said. “We have to address it openly and maturely. And I would like to see an open and mature type of discussion to take place.” Parkop was responding to Pato’s ministerial statement in Parliament yesterday. “We are supposed to have a robust relationship with Indonesia because they are our immediate neighbors,” Parkop said. “We should have integrated our economy. We should have closer people-to-people relationship. After all we are two countries sharing a land border. “But we don’t have that relationship. And it is because there is a sore point (West Papua issue) and we must address that sore point. And I want to thank the Prime Minister Peter O’Neill for trying his best to address that sore point.” He said the leadership of Indonesia under former President Susilo Bambang Yudhoyono was open. “But now we have a President Joko Widodo. We are not sure of his leadership on the West Papua issue.” He said he had always supported what the West Papuans were fighting for. “I have strong points about it,” Parkop said. “It has been part of my life and I want us to progress it to a point
————————————————
https://en.tempo.co/read/news/2018/09/13/055921615/Police-Papua-Will-Receive-Special-Attention-During-Election


2) Police: Papua Will Receive Special Attention During Election
TEMPO.CO, Jakarta - Chief of the National Police General Tito Karnavian said that Papua remains as one of the regions which will receive special attention during the 2019 Presidential Election.
"Papua still receives our attention," Tito said at the PTIK Auditorium, South Jakarta on Thursday, September 13, 2018. Tito provided assurance that despite the presence of conflict-prone areas, preparation for the upcoming Presidential Election has been carried out well. Tito explained that preparations have been carried out by coordinating with all respective stakeholders.
In 2019, the Presidential Election will be held along with legislative elections for the House of Representatives (DPR), Regional House of Representatives (DPRD), and Regional Representatives Council (DPD). Therefore, the Police are making efforts to synergize the perception of all stakeholders, including the Indonesian National Army.
"How to make plans for joint operations, synergizing regions covered by regional Police, Regional Military Command, Military Resort Command, and then organize simulations," Tito said.
Tito added that the Election will bring along polarization, which will continue to increase tension. In an attempt to mitigate the situation, Tito has ordered Police officers to cooperate with known public figures, regional figures, and public organizations to reduce tension.
On Thursday, September 13, 2018, the National Police and the Indonesian National Army is conducting a coordination meeting for a special operation as part of the preparation for the upcoming 2019 Presidential Election.
ANDITA RAHMA
———————————————
http://tabloidjubi.com/eng/avoiding-conflicts-of-interest-on-indigenous-land-mapping/
3) Avoiding conflicts of interest on indigenous land mapping
Published 50 mins ago on 13 September 2018 By admin
Jayapura, Jubi – The indigenous land mapping in Jayapura District is very important, but it should be noted that it might have a tendency of contestation or conflict of interest among communities.
According to an anthropologist at the University of Papua I Ngurah Suryawan, the claim of land has a long history of dynamic and inconsistent movements. It needs a thorough study of the form of the indigenous land mapping, as it is inherent in the rights of indigenous people.
“Speaking of this, the indigenous people’s land’s right is currently facing a strong onslaught of change. “People are busy talking about land rights, but then they just see how their land was taken by companies, their relatives or other clans of family,” said Ngurah on Thursday (9/6/2018).
Meanwhile, Jayapura Regent Mathius Awoitauw has also formed a task force to do mapping on the indigenous territories. The task force chaired the Regional Secretary of Jayapura District which members are including the Indigenous Peoples Alliance of the Archipelago (AMAN), NGOs and indigenous communities.
“The task force was launched on Friday (5/9/2018) after many consultation and finalization among members and communities.” (*)
Reporter: Timoteus Marten
Editor: Pipit Maizier
--------------------
Posted by AWPA Sydney News at 5:17 AM