2) The prospect of Indonesia invading PNG: could it really happen?

------------------------------------------------
http://www.pina.com.fj/index.php?p=pacnews&m=read&o=18221682305b919d888a2b224bebf0
1) Indonesia keen to engage with the Pacific – tells Vanuatu to respect its sovereignty over West Papua
By Makereta Komai, PACNEWS Editor in Nauru  The Indonesian Government is keen to engage more with Pacific Island Countries as its steps up its presence in the region. And it’s planning its first ever Indonesia-South Pacific Forum early next year, revealed Indonesia’s head of delegation to the Pacific Islands Forum Leaders meeting in Nauru this week, said Dr Desra Percaya, Indonesian Government’s head of delegation to the Pacific Islands Forum Leaders meeting in Nauru this week. While details of the conference will be conveyed to Pacific Leaders later, Dr Percaya said Indonesia has also offered its assistance in the combatting illegal, unreported and unregulated fishing (IUU) and addressing marine plastics in the Pacific. “Your concern in oceans is the same as us. That’s why in the partners dialogue we are offering to work together to establish Pacific framework in combatting IUU in the region. In 2014 we lost US$4 billion because of IUU fishing and directly affected the livelihoods of the people, said Dr Percaya. He told PACNEWS the second project for the Pacific is providing technology for biodegradable plastics.“This is not only a problem in Indonesia or Pacific but a global problem. We have capacity building assistance and we can send technicians to the region to help with the problems of marine plastics. “That is our objective - we are open to any countries in the Pacific. We have been engaged with a number of countries in the Pacific through the Bali Forum that discusses challenges to democracy. We are also inviting Pacific countries to our Oceans conference in Bali in October this year. On West Papua, the Indonesian diplomat reiterated the issue of Papua is an internal matter for Indonesia. “We have heard that Vanuatu has been very active in raising the issue about West Papua. I am just wondering why they are doing this because we are also a democratic country and we are keen to work together with members of the Pacific Islands Forum.  “You must look at Indonesia in a big picture. We have changed. We were under the military rule but now we are now a very vibrant democracy and issues are discussed openly. We are a responsible government in the international community and member of the United Nations, so I am puzzled why they are doing this. “If I can send a message to them – please just get real! Indonesia is still a democratic country. We are not hiding anything, we are an open country and if you have any concern come and talk to us about it. To us, it’s a futile exercise, said Dr Percaya. Reacting to the Chinese walk-out at the Partners Dialogue with Pacific Islands Forum Leaders on Tuesday this week, Dr Percaya said from his own experiences, having represented Indonesia as its Permanent Representative to the United Nations in New York, countries should respect the chair and host of the meeting. “The brief from the Pacific Islands Forum Secretariat to dialogue partners was very clear – only ministers would be given the opportunity to speak at the Dialogue session, said Dr Percaya.
SOURCE: PACNEWS
—————————————————————
http://asopa.typepad.com/asopa_people/2018/08/the-prospect-of-indonesia-invading-png-could-it-really-happen.html

2) The prospect of Indonesia invading PNG: could it really happen? 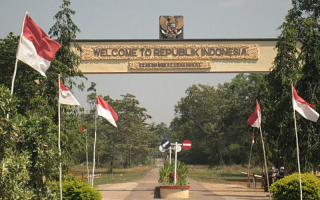 The border of Indonesia and Papua New Guinea at Sota, Merauke
KUNDIAWA – Will Indonesia ever invade Papua New Guinea? It’s an eyebrow raising question.
To some people it may sound irresponsible, irrational or insensitive.
Of course there is always speculation and theorising about the why, when and how an invasion could occur
and possibly the best people to render a credible verdict are those in diplomatic missions, foreign affairs
departments and intelligence networks.
But individuals around the region - like Australia, New Zealand, PNG and Indonesia of course - are entitled
to their own conjecture, and I have my opinion too.
Before moving to the substantive question, let me start from the periphery by asking could Indonesia invade
PNG if it chose to do so?
It would be a walk in the park. With its military superiority and huge numbers of personnel, it will take only a
few hours for Indonesia to effectively take over. Port Moresby would be a pushover.
Indonesia has a population of over 260 million and nearly one million military personnel of whom some
440,000 are active, the rest reserves.
Its air force has 478 aircraft including 120 in an attack capacity and 200 helicopters.
Land assets include 418 combat tanks, 1,131 armoured fighting vehicles, 105 self-propelled artillery pieces,
356 static artillery and 153 rocket launchers.
Its 221 naval assets are less impressive but still overwhelming from a PNG perspective with 12 surface
warships and three submarines.
Papua New Guinea with 7,500, 000 people and less than 500 military personnel has zero fighting aircraft,
zero land armour and an insignificant number of small vessels. It would not stand a chance of defending itself. I
t would be a clean sweep of the chessboard not long after those first paratroops floated to the ground.
Now let me go back to the substantive question: will Indonesia ever invade PNG? Thankfully, given the
foregoing statistics, my answer is no. Indonesia will never invade PNG. Here’s why.
Apart from external factors like Australia’s great interest in any aggression, Indonesia has a nagging internal
revolt to keep her busy. The long-running West Papuan insurgency will continue to provide a buffer for PNG.
Then there’s the topography of PNG itself. Indonesia might find Moresby easy pickings but controlling PNG
would be an entirely different matter. If Indonesia still cannot fully contain West Papua after four decades
of trying, PNG would be at least as much of a challenge.
Indonesia also learned a lesson from her December 1974 invasion of tiny East Timor with a population
of just over 1.2 million people. Dili might have been straightforward but the mountains were an entirely
different proposition. Also it had the rest of the world telling it to lay off.
After more than two decades of annexation, serious human rights abuses and the deaths of between
100,000 and 180,000 soldiers and civilians, through United Nations arbitration East Timor eventually
gained independence in 2012.
But the big issue for an Indonesian invasion of Papua New Guinea would be Australia. It would be hard
for other southern cousins not to be drawn into the conflict, her big fear being that Indonesia would have
even more expansionist plans.
PNG strategically serves as a buffer for Australia from any serious aggression from Southeast Asia.
Australia will want to keep it that way.
Moreover, Indonesia would not want to draw condemnation, sanctions and even intervention from t
he international community.
So, in my opinion, Indonesia will not invade PNG – the scenario does not compute.
The problem I see that will create tension and disharmony in the PNG-Indonesia relationship is intrusion
and occupancy of PNG territory along the border by Indonesian military.
There have been many instances of border incursions by Indonesian soldiers claiming to be hunting
West Papuan rebels. They could just as easily be testing PNG’s sensitivity to such matters – and our
ability to do something to thwart them. 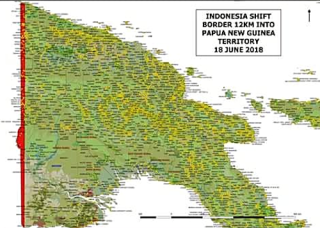 The claimed Indonesian Papua border 'shift' – the red zone moves closer to Ok Tedi mine (PNG Blogs)
Indonesia is now reportedto be stationing an additional 450 military personnel along its 800km border
with PNG.
The ostensible reason is to crackdown on drug smuggling.
But just a couple of months earlier an eastward border 'shift' was said to bemore interested in using military “explorers” to assess what resources there are in some border areas.
To me, resources could prove the flashpoint if there is to be one. The task for PNG is to beef up our
own military presence and fortify the physical border.
But that takes troop power and money. Two things we don’t seem to have a lot of at present.
So invasion, no. Resource-based incursion, yes. Outcome? It has to be a deal, doesn’t it?