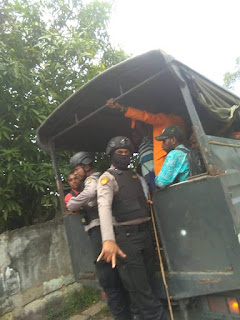 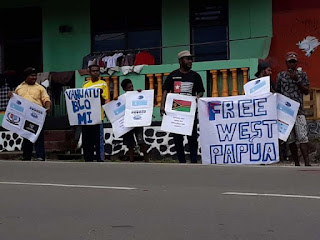 http://tabloidjubi.com/artikel-19162-demo-ulmwp-45-orang-ditahan-di-polres-jayapura.html
Arrests took place yesterday as people around the country gathered to hold peaceful rallies to support the Pacific Islands Forum (PIF) meeting, which is currently underway on Nauru.
According to the ULMWP, 45 people were arrested in Sentani, West Papua at 08.12am West Papua as they prepared to travel towards a central gathering point. All are currently detained.  The arrests were carried out by the joint Indonesian Security Forces, made up of around 100 Indonesian Police Officers, 30 Intelligence Personnel, and seven Detachment 88 – “Anti-Terror Special Forces” (trained by Australia). At least eight Indonesian Security Forces vehicles were deployed in this operation.
According to the rally coordinator, the arrest took place because “The police said there was no permit from the Papua Regional Police Chief.”
34 arrested have been reported Abepura, from the University of Science and Technology Jayapura (USTJ). Please scroll down for a list of names.
*We are awaiting more information on the current state of detainees, and news of their release.
The demonstrations were organised to call on the Pacific leaders to keep the issue of West Papua at the forefront of discussions during the Pacific Islands Forum being held on Nauru this week, and  to support Vanuatu’s resolution on West Papuan self-determination at the United Nations.
This week the leaders who comprise the Pacific Islands Forum (PIF) are in Nauru to discuss Pacific regionalism. The official slogan for the meeting is “Building a Strong Pacific: Our People, Our Islands, Our Will.”
The forum’s 2018 agenda includes discussions on regional security, environmental security, and climate change. The case of West Papua is one of the most relevant examples of what can happen when there is a lack of regional solidarity and focus. In Melanesia regional security is threatened by the bullying presence of Indonesia, which is even more prevalent when the indigenous West Papuan people publically demonstrate their support for the ULMWP.
At this critical juncture it is the duty of all Pacific citizens to remind their representatives that the West Papua issue of decolonisation and self-determination will remain central for a Pacific solution, and is an unfinished business at the C24 and United Nations.
# WP4PIF # PIF4WP #LetWestPapuaVote
The confirmed names and details of 34 of those arrested in Abepura is as follows:
Antonius Agapa (USTJ studentMelkizedek Hisage (USTJ Student)Muru Wenda (USTJ Student)Adrianus Awunim (USTJ Student)Andrianto Tekege ((Vocational Students)Ermes Morib (USTJ student)Aquino Youw (Umel Mendiri Student)Ermes Morib (USTJ student)Fredy Wesli (USTJ student)Laurens Siep (USTJ student)Aloisius Alua (USTJ Student)Herry Siep (USTJ Student)Filemus W. Pahabol (USTJ Student)Aleks Giay (Youth)Yusuf Yikwa (USTJ Student)Jhon Douw (Youth)Evensius Kowawin (USTJ student)Lao Mabel (USTJ student)Apkol Uropmabin (USTJ Student)Manus Gombo (USTJ Student)Yus Agus Kobepa (USTJ Student)Alfando Kogoya (USTJ student)Agustinus Goo (USTJ Student)Mabel Lives (USTJ Students)Fernando Waine (USTJ student)Yan Elopere (USTJ Student)Fortunatis D. Borom (USTJ Student)Malvin Yobe (USTJ student)Iche Murib (Spokesperson for the Action Committee – ULMWP)Simion Daby (Chair of the Action Committee – ULMWP)Kiwun Towolom (Activist)Dimius Towolom (Student)Daniel Kudiay (Youth)Jhon Tabuni (Youth)
This is a developing story, please do share. We will continue to update as more information becomes available. Photos: ULMWP.
For interview requests, please email Kate@freewestpapua.org
---------------------------------------------------------
https://www.ucanews.com/news/indonesian-police-arrest-papuan-student-on-treason-charge/83229
2) Indonesian police arrest Papuan student on treason charge
Supporters of Simon Carlos Magal reject claim, say they are at a loss as to why post-grad student is in custody

Police in Papua's Timika district have arrested Simon Carlos Mahal, 26, on treason charges. (Photo supplied)
Ryan Dagur,
Jakarta  Indonesia
September 4, 2018
Rights activists in the restive Indonesian province of Papua have expressed concern over the fate of a student arrested on treason charges. Simon Carlos Magal, 26, was arrested in Timika district on Sept. 1 after leaving the office of the Anti-Violence and Human Rights Foundation, a local human rights group. His aunt Yosepa Magal Alomang told ucanews.com her nephew was being held incommunicado. "His mobile phone was confiscated, so the family do not know his whereabouts," said Alomang, who is also a rights activist. Timika police chief, Agung Marlianto, later confirmed the arrest and the treason charge but refused to say what the accused was supposed to have done. "Magal has been transferred to police headquarters in Jayapura [for further questioning]," Marlianto was quoted by local news portal SuaraPapua.com, as saying. According to Alomang, her nephew was not involved in any subversive activities and was preparing to leave for Australia as a post-graduate student. However, Magal was known to have written papers on the situation in Papua and taken part in some group discussions, leading to speculation by some observers that the authorities were uncomfortable with the thought of him going to Australia and becoming a potential thorn in their side. A long-running separatist insurgency has gripped Papua since it was incorporated into Indonesia after a widely criticized U.N.-backed referendum in 1969. Local lawmaker Laurens Kadepa, said he had tried to visit Magal at the police detention facility to make sure he was not being maltreated. However, police refused him access. Father John Djonga, a well-known human rights defender in Papua, said Magal's arrest was another blot on Indonesia's record of human rights enforcement in the province. "Accusations of treason have become an arbitrary tool used against Papuans," Father Djonga said, adding, "repressive measures escalate conflict." In March, this year, Yanto Awerkion, a member of the pro-independence West Papua National Committee was handed a ten-month jail sentence for treason by an Indonesian court, for helping to organize a petition calling for West Papuan independence. In December 2016, four students were arrested on treason charges in Manado for allegedly having pro-independence views, according to activists.
———————————————
https://islandsbusiness.com/breaking-news/item/2191-rolling-protests-in-west-papua.html
Islands Business 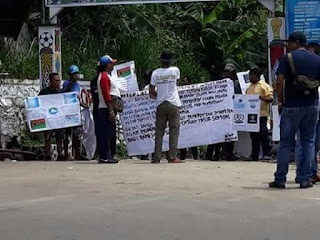 PROTESTERS AT SENTANI AND JAYAPURA TODAYPhoto: Supplied
BY NETANI RIKA
A SERIES of protests has taken place in West Papua in support of Vanuatu's plan to address human rights abuse by Indonesia.
The protests in Sentani and Jayapura led to some 80 arrests by security forces.
Vanuatu has promised to address Indonesia's occupation of the former Dutch colony when Pacific leaders meet in Nauru tomorrow.
Pacific governments led by Fiji and Papua New Guinea continue, however, to support Indonesia which has attempted to reduce Papuan numbers through internal migration.
Vanuatu hopes to gain support for West Papua to be enlisted in the United Nations decolonisation list.
————————————
http://www.pina.com.fj/?p=pacnews&m=read&o=19250299615b8e0e54ab43e873c36e
4) Partnerships for a stronger Pacific highlighted at 49th Pacific Islands Forum
Strengthening regional security and resilience was the focus of the 49th Pacific Islands Forum meetings between Pacific Leaders, Dialogue Partners, and Forum Observers in Nauru today.“Nauru’s theme for the 49th Pacific Islands Forum is: “Building a Stronger Pacific – Our People, Our Islands, Our Will’. It recognises that the future of the Pacific will be determined by its people,” said President of Nauru and Forum Chair President Baron Divavesi Waqa. “While the Pacific region must drive and forge its own development future – Our People, Our Islands, Our Will – we cannot do this in isolation. In our ever growing globalised world and given the transboundary nature of many of the challenges we face – climate change, marine pollution, unsustainable fishing, transnational crime – partnerships and cooperation are vital to for building a strong and secure Blue Pacific continent.” “Building a Stronger Pacific means maintaining our collective focus on achieving a region of peace, security, social inclusion and prosperity while realising opportunities to collaborate with likeminded partners – both traditional and new – in support of this vision.”   Two dialogues took place across the second morning of the Forum. The first was with the eighteen Dialogue Partners to the Forum.  The theme for the discussion was Building a Strong Pacific – Strengthening regional security to ensure safety and wellbeing for all. The second dialogue was with the Forum’s Associate Member and Observers and focused on the theme of Building a Strong, Resilient and Sustainable Blue Pacific.Forum Dialogue Partners engaged with Pacific Leaders on a range of approaches for enhancing regional security, from greater cooperation, to addressing climate change as a security risk, as well as strengthening regional maritime security.It was emphasised that Pacific Leaders will strengthen regional security cooperation, supported by partnerships to enhance capability and enable greater dialogue, analysis and information sharing.Forum Associate Members and Observers focused on opportunities for collaboration and action towards a region that is more resilient to the effects of climate change and disaster risk. As part of this discussion, Forum Leaders sought support for the proposed Pacific Resilience Facility, which will be used to co-finance and leverage additional funding for resilience investment of new or existing infrastructure projects in the region.There are currently 18 Dialogue Partners to the Forum – Canada, People’s Republic of China, Cuba, European Union, France, Germany, India, Indonesia, Italy, Japan, Republic of Korea, Malaysia, Philippines, Spain, Thailand, Turkey, United Kingdom and the United States.The Forum’s Associate member is Tokelau and Observers include American Samoa, Commonwealth of the Northern Marianas, Guam, Timor Leste, Wallis & Futuna, ACP Secretariat, Asian Development Bank Commonwealth Secretariat, International Organisation for Migration, United Nations Secretariat, Western and Central Pacific Fisheries Commission, and the World Bank.SOURCE: PIFS/PACNEWS
-----------------------
Posted by AWPA Sydney News at 2:33 PM