1) Vanuatu's move and ULMWP at the UN General Assembly session

2) Yahukimo, the entrance of gold miners to Pegunungan Bintang Province
3) Indonesia, Australia hold bilateral meeting during UN General Assembly
-----------------------------
From Free West Papua Campaign facebook page
1) Vanuatu's move and ULMWP at the UN General Assembly session
Tabloid JUBI reports
UN Headquarters, New York, United States, this time has a special meaning for the United Liberation Movement for West Papua (ULMWP) who is a member of the Vanuatu official delegation.
The annual meeting which was opened on Tuesday (11/9) by the UN Secretary General, Antonio Guterez and attended by various world leaders, was only attended by the ULMWP envoy who joined Vanuatu's state delegation on Monday (8/24). Representatives of ULMWP in the Vanuatu delegation included Benny Wenda (as executive chairman of ULMWP), Rex Rumakiek (secretary) and Jennifer Robinson, a British international lawyer who was incorporated in the International Lawyers for West Papua (ILWP).
"We are grateful because this time ULMWP can officially join the Vanuatu delegation. This is all due to the hard work, prayers and struggles of all the people and the Papuan fighters in the country and everywhere who are waiting for liberation from the oppression of Indonesian colonialism," said Benny Wenda accompanied by Rex Rumakiek after the Vanuatu delegation consisting of Charlot Salwai (Prime Minister), Ralph Regenvanu (Minister of Foreign Affairs) and Odo Tevi (Vanuatu ambassador to the United Nations) attended the 73rd session of the UN General Assembly this year. According to Wenda, the ULMWP representative had previously specifically met with Odo Tevi, Ambassador Vanutu to the United Nations to discuss and prepare strategic matters that would be presented at the UN General Assembly this time as well as in the context of political lobbying. "The Ambassador of Vanuatu is very welcoming of our meeting. He hopes that the Papuan people and all components of the Papuan liberation struggle must unite. Because unity towards the ideals of national liberation is the main key," explained Wenda, who currently lives in Oxford, England, because of asylum. political.
Meanwhile, Rex Rumakiek, the ULMWP secretary who had arrived in New York from Australia the day before to attend the General Session, invited all components of the Papuan people to unite in support of the ULMWP as a platform for the struggle that Vanuatu has now recognized.
"The Papuan people and all components of the Papuan fighters no longer repeat the history of the divisions that have been made by the senior senior fighters. Let us together support Vanuatu's move to bring our problems to the United Nations," said Rumakiek who is also a senior Papuan fighter who now lives. in Australia.
Referring to the petition about the referendum which was signed by 1.8 million people of the West Papua people and had become a controversy because it was denied directly by Rafael Ramirez, as chairman of the UN Special Decolonization Commission (C-24) in September 2017, Rumakiek explained this actually it has become one of the written efforts that the Papuan people have shown an attitude of wanting to be free from Indonesian colonialism.
"Although the petition itself is not a valid mechanism in decision making at the UN, the struggle and attitude reflected in the presence of the petition needs to be appreciated as evidence that Papuans want independence," Rumakiek said in the ULMWP forum representing the West Papua National Coalition for Liberation group. (WPNCL).
He added that not only because of the controversy over the petition, making the people and components of the West Papua struggle fragmented. Rumakikek advised that the unity that had been formed in the ULMWP and now progressing because it was supported by Vanuatu along with a number of South Pacific countries needed to be supported by all components of the Papuan people at home and abroad.
Vanuatu, according to its state protocol, has included several names to be part of their delegation team to guard the struggle for West Papuan self-determination in the 73rd UN General Assembly in 2018 such as; Jacob Rumbiak (spokesman for ULMWP), Melinda Janki (chairman of the International Lawyers for West Papua / ILWP) and Laura Lini as Vanuatu's envoy for West Papua and a daughter of the South Pacific figure, Walter Lini.
However, due to failure, some of these names have not been able to join Vanuatu's official delegation to attend the 73rd UN General Assembly in 2018 at the UN General Headquarters in New York
Vanutu, as an archipelago in the South Pacific, has for three decades been a strong supporter of West Papua's political struggle for independence from the Indonesian occupation. A small country located in the east of Australia, northeast of New Caledonia, west of Fiji and south of the Solomon Islands, regularly continues to fight for ULMWP membership status in the Melanesian Spearhead Group (MSG) group but fight for the right of self-determination for the people of West Papua in regional Pacific Island Forum (PIF) to the UN level.
http://tabloidjubi.com/artikel-19801-langkah-vanuatu-dan-ul…
#UNGA2018 #WestPapua #ULMWP #PIF4WP #Vanuatu#SelfDetermination #LetWestPapuaVote 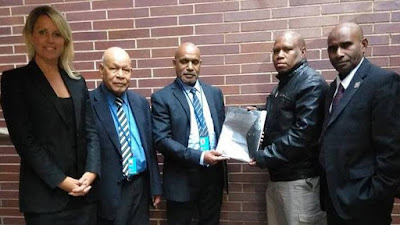 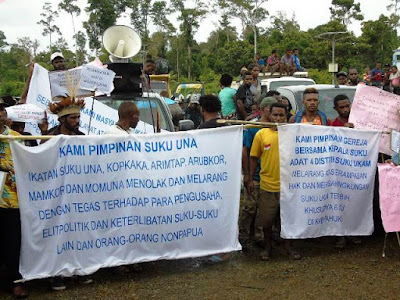 Yahukimo community with six tribal chiefs came to Yahukimo Local Parliament (DRPD) Office asking for the determination of illegal mining – Jubi doc
Jayapura, Jubi – Yahukimo Regent Abock Busup said that Dekai City, the capital of Yahukimo District, is one of the entrances for miners to get to the mining site in Kawe Village, Awimbon Sub-district of Pegunungan Bintang District, Papua Province.
“The local government of Pegunungan Bintang allows the mining activity in Kawe Village. However, those miners come through Dekai,” said Busup in Jayapura last week.
According to him, the access from Dekai to Kawe Village can be reached in about twenty minutes by land transport and aeroplane. This easy access has made the miners from other regions in Papua or even from outside of Papua tends to choose Dekai as the entry point to the mine site.
“The migrant miners fly to Dekai before continuing their journey to Kawe Village by land transport,” he said.
However, the gold mine is not only existed in Pegunungan Bintang, but also in Yahukimo District, which forced an indigenous group joined in IS-UKAM (The Association of Una, Kopkaka, Arumtap, Arupkor, Mamkot and Momuna tribes) who urge the determination of mining activities in this area.
The Secretary of IS-UKAM Timeus Aruman said the mining companies in this area are suspected to bringing in many workers from other islands of Indonesia, namely Java, Sulawesi, Sumatra and Kalimantan.
Meanwhile, the Chief of Una-Ukam Tribe Yakobus Kisamlu similarly said his community has refused the illegal mining and stated that two gold minings in Kawe Village of Awimbon Sub-district of Pegunungan Bintang District and Yahowimo Village of Suntamon Sub-district are prohibited, and UKAM community as the owner of land rights reject the mining companies.
The Determination of People’s Mine Site
Abock Busup also said that he was trying to close the people’s mine site in his region. However, he further said the closure of this mine site needs further study and analysis. The government also needs to listen to suggestions and inputs from many stakeholders to find out the benefits and drawbacks of a gold mine site in this area.
‘If there is a dispute or victims, who will be responsible? So, this needs to be reviewed, a prior study before establishing a regulation to address these problems,” he said.
The local parliament, according to him, has formed a Special Committee (Pansus) and sent a letter asking the owners of five helicopters that had been carrying the miners into the mining area to stop the operations of their helicopters.
“On 17 September 2018, we have sent a letter to ask the helicopters to keep staying in Yahukimo,” he said.
It’s to avoid conflict because the local community might suspect the helicopters are used to transport people to the mining location. “If there is a conflict, people will accuse it as human rights violations, or they will accuse the government of not paying attention and many other reasons even though the government was already strict,” he said.
The location of people’s mine site in Yahukimo, he said, is in Seredala Sub-district. It takes 30 minutes by land from Dekai, the capital of Yahukimo District. “Indeed, up to now the (mining) activities continue to run, but they have been reduced,” he said.
Meanwhile, Papua Governor Lukas Enembe recently also stated that he refused illegal mining in Papua because it damages the nature of Papua. “From now on there will be no illegal activities in Papua because Papua is now under the supervision of the United Nations (UN),” said Enembe.
Moreover, the governor said the Papuan People’s Assembly (MRP) keeps a letter from the UN to protect the forests and land of Papua. “The point is that there should be no illegal activities including illegal fishing, illegal logging and illegal mining as well. All those activities should be banned on Papua’s land,” he said. (*)
Reporter: Arjuna Pademme
Editor: Pipit Maizier
—————————————————————
https://en.antaranews.com/news/118936/indonesia-australia-hold-bilateral-meeting-during-un-general-assembly
3) Indonesia, Australia hold bilateral meeting during UN General Assembly
Reporter: Antara  15 hours ago
New York, (ANTARA News) - Indonesian Foreign Minister Retno Marsudi held a bilateral meeting with her Australian counterpart Marise Payne on the sidelines of the 73rd UN General Assembly at the UN headquarters in New York on Tuesday.The opportunity was the first time for Foreign Minister Retno to meet Marise Payne in her new position as Australian Foreign Minister replacing Julie Bishop.Previously Foreign Minister Retno had known Payne well when the latter served as Australia's defense minister."This is an asset for me to continue the good collaboration that I have done with Julie Bishop and now with Maurice Payne," Retno said.In the bilateral meeting the two ministers discussed, among others, the results of the visit of Australian Prime Minister Scott Morrison to Indonesia last month including the issue of Australia-Comprehensive Economic Partnership Agreement (CEPA).In addition, they also discussed about Indonesia's invitation for Australia to attend the Our Ocean Conference which will be held in Bali in October.In general, no bilateral issues were discussed in depth, because the meeting symbolically symbolized a new partnership because Payne currently holds a portfolio as Australia's foreign minister, Retno said."I also thank Australia for working well with Indonesia, helping Indonesia in the collaboration of the Pacific Islands Forum and Australia always consistently emphasizes respect for Indonesia`s territorial integrity," Retno said.Reporting by Aditya Eko Sigit WicaksonoEditing by Othniel Tamindael, Fardah