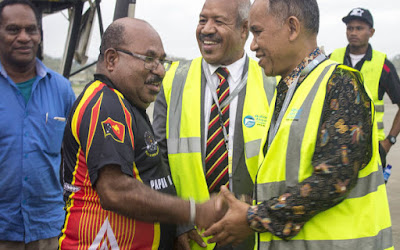 As Port Moresby's Governor Powes Parkop (middle) welcomed his counterpart from Indonesia's Papua province Lukas Enembe (left) in Papua New Guinea's capital, the Indonesian ambassador to PNG, Ronald Manik (right), also made an appearance. Photo: Wanpis Ako
As Port Moresby's Governor Powes Parkop (middle) welcomed his counterpart from Indonesia's Papua province Lukas Enembe (left) in Papua New Guinea's capital, the Indonesian ambassador to PNG, Ronald Manik (right), also made an appearance. Photo: Wanpis Ako
The call from Lukas Enembe comes as he is visiting PNG's capital Port Moresby.
He travelled there to attend celebrations to mark the country's 43rd anniversary of independence at the invitation of the governor of PNG's National Capital District, Powes Parkop
Mr Enembe, who was recently re-elected as governor, said that it shouldn't have taken 43 years for PNG and Papua to have formal contact.
"Why we didn't come to PNG and connect with them before, for all these years, it's no good," he reflected in a telephone interview from Port Moresby.
"That's why I'm thinking we must open the relationship with PNG, we must join together economically, politically, culturally. It's good for our people, good for our government," continued Mr Enembe.
"We need to be closer with PNG. They're very important in the Pacific Islands. That's why we must join together with them."
For years, links with between the people on both sides of the border running down the middle of New Guinea have been limited, partly through a mix of poor transport links and restrictions implemented by security forces on the Indonesian side.
Mr Enembe said that now the Indonesian national government also saw the merits of closer ties with PNG, and was not opposed to his visit this week.
"My government said 'you go, this is very important', because it's good to build the relationship with PNG. They're not afraid of that.”
According to PNG's Foreign Minister Rimbink Pato, the two countries have forged a close relationship where all issues of mutual interest, including sensitive border matters, were discussed in a constructive way.
He was responding to criticism from Mr Parkop who last week spoke out about human rights abuses in Indonesia's Papua region, widely known as West Papua.
Mr Parkop was critical of both PNG and Indonesian governments for not confronting the West Papuan rights issue openly.
However, Mr Pato denied that there was a lack of interaction regarding Papua. The minister said PNG welcomed the Indonesian government policy under President Joko Widodo to take a development-led approach to the Papuan Provinces rather than a security-led approach.
Governor Enembe said President Widodo was aware of the problems in Papua, and was travelling frequently to Papua.
Mr Enembe is not outwardly pro-independence. But he said while Papua region had been given special autonomy by Indonesia in 2001, the arrangement hadn't worked out well, because Jakarta still controlled affairs in the Papuan provinces.
He was candid about the impact of Indonesian security forces in Papua.
"Every day my people are being killed," Mr Enembe said. "That's why I think… the military of Indonesia, the police of Indonesia, they've stopped thinking about the humanity in Papua.
"Some people in the Highlands, and the coast, they come to me, they're crying, crying about what's happening in Papua. Humanity is very important.”
The Governor claimed that West Papuans were dying at a disturbing rate through three main causes: because of neglected health services, because of the spread of HIV / AIDS, and because of alleged killings by the security forces.
"We are becoming a minority... a lot of people they die. I don't know... is this by a system... I don't know."
He said Indonesia had co-opted Papua's land, minerals and forest resources, while West Papuans were largely left without a say in the matter. According to him, that's part of the reason why Papuans sought to reconnect with PNG people, their Melanesian kin.
"We can open the links to PNG, because Papua and PNG... this is our land, from Sorong to Samarai one land. One land. Papua New Guinea people and Papua people, we have one land, one culture, this island.”
Port Moresby and Papua's Jayapura city are planning exchange programmes in the areas of tradition, culture, economics, social, sports and music to strengthen their sister-city relationship.
"I want us to work towards these small things achieving that, bridging the gap to open up for each other to greater future," Mr Parkop said.
"Sending your Pesipura [Jayapura] soccer team to challenge our local team or us participating in Lake Sentani or Jayapura Festival can start to open up and develop the relationship which is not based on fear."
After Moresby, the Governor is heading to PNG's second city of Lae, where he hopes to sign an economic collaboration agreement with the Morobe provincial government.
Then before heading back across the border, Mr Enembe will visit the northern towns of Madang and Wewak, further building links between his province and PNG.
——————————————————————
http://www.scoop.co.nz/stories/PO1809/S00209/fonterra-implicated-in-deforestation-and-human-rights-abuses.htm

Wednesday, 19 September 2018, 12:27 pmPress Release: Greenpeace New Zealand
Wednesday 19 September: Over one a half million rugby fields of Indonesian rainforest were destroyed between 2015 and 2017. That’s just one of the harrowing statistics included in a devastating new investigative report released today by Greenpeace International. The report, Final Countdown, documents extensive deforestation and human rights abuses by 25 major palm oil producers. Of the 25 palm oil producers investigated, Fonterra’s sole supplier of Palm Kernel Expeller (PKE) Wilmar, was found to be buying from 18 of them. "Our investigation shows that the palm products Wilmar trades are still contaminated with rainforest destruction. " says Gen Toop, Greenpeace’s sustainable agriculture spokesperson. New Zealand is the biggest importer of PKE in the world and imports continue to rise. PKE is a by-product of the palm oil industry that is used in NZ as a supplementary feed for dairy cows. "Indonesia’s rainforests are the lungs of our planet, they are one of our strongest defences against climate change, they are a source of life for Indigenous People, and incredible species like the orangutan," says Toop. "Through continuing to buy PKE from Wilmar, Fonterra and NZ’s dairy industry are fuelling rainforest destruction, forest fires and human rights abuses across Indonesia."
In late 2016 Fonterra committed to using only responsible palm oil products throughout its global supply chains. "Fonterra made promises years ago to get deforestation and human rights abuses out of its supply chain. But this report clearly shows they are failing. The time has come for Fonterra to drop PKE altogether," says Toop. The report found that together the 25 palm producers have cleared over 130,000 ha of rainforest since the end of 2015. It is also the most comprehensive assessment of deforestation in Papua, Indonesia. "Papua is one of the most biodiverse places on earth, and its forests had until recently been spared the destruction happening elsewhere in Indonesia. But now the palm industry is moving in and clearing forest on Papua at an alarming rate," says Toop. In addition to deforestation, the 25 individual cases in the report include evidence of exploitation and social conflicts, illegal deforestation and forest fires linked to land clearance. "New Zealand prides itself in being a country that cares for the environment and respects human rights. But the dairy industry’s ongoing use of PKE is completely undermining that.” The use of PKE has also been one of the main drivers of dairy intensification in New Zealand which has seen an explosion in cow numbers from 3.84 million in 1994 to 6.47 million in 2017. "Using imported animal feed fuels a high-input industrial model of dairy farming that’s destroying our rivers and warming our climate. We simply do not need to import any kind of animal feed to NZ, let alone dirty PKE.” "Fonterra needs to drop PKE so that the dairy industry can re-focus onto pasture based dairying and farm fewer cows. These are the first steps towards transforming NZ's dairy industry to regenerative farming which is the direction it sorely need to be going."
https://media.greenpeace.org/CS.aspx?VP3=SearchResult&ALID=27MZIFJWPRPRP&PN=1
The report can be downloaded here https://storage.googleapis.com/p4-production-content/international/wp-content/uploads/2018/09/7d4b5ba9-final_countdown_pages_lr_greenpeace_19092018.pdf
References
1.6m ha lost between 2015 and 2017 divided by rugby field 1.0008 ha.
ENDS
------------------------------------
Posted by AWPA Sydney News at 1:38 AM