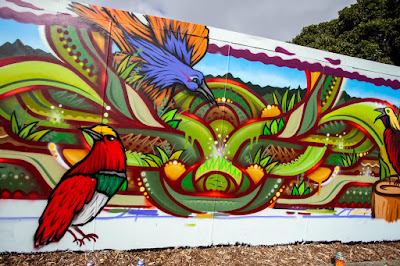 For too long the story of Indonesian forests has been painted with the darkness of burning rainforests, disappearing species and displaced communities.
Greedy palm oil companies, that only seem to be driven by the bottom line whatever the cost to humanity or biodiversity, have played a major role in this.
Little or nothing is known about the beauty of the spectacular Birds of Paradise that call the forests of Papua home. So far, around 40 different species of these birds have been found, and they’re considered by some to be among the most beautiful creatures on earth.
After ravaging the forests of Borneo and Sumatra, the palm oil industry has reached the final frontier, Papua, home to these Birds of Paradise. Both the birds and the forest could be lost if we allow these companies to continue.
That’s why street artists and volunteers from all over the world, from Melbourne to Taipei and Vienna to LA, are taking matters into their own hands.
Their mission is simple – to re-create the essence of the extravagant, brightly coloured plumage, crazy courtship dances and bizarre behaviours of these birds in our cities through huge artworks on walls. To remind us of the constant threat to Indonesian wildlife, but also inspire us to act to protect it.
It’s time for us to stand together for the future of Indonesian forests. Artists, students, bird enthusiasts or consumers buying palm oil products in supermarkets, we need to come together and act.
Join this massive movement!
Admire and get lost in the #WingsOfParadise artworks in your home city or on social media, or share your favourite piece with friends and start your own conversation about protecting the future of the forests and our planet.
—————————————
https://en.antaranews.com/news/118662/indonesian-australian-leaders-close-ties-key-to-productive-cooperation-envoy
3) Indonesian, Australian leaders` close ties key to productive cooperation: envoy
Reporter: Amtara  4 hours ago
Jakarta, (ANTARA News) - Close relations between Indonesian and Australian leaders are a key to positive and productive relations and cooperation between the two neighboring countries, an envoy said."The strong relations between Indonesian and Australian leaders make relations between the two countries special. For instance, (Indonesian) President Joko Widodo was the only head of state invited to a dinner hosted by then (Australian) prime minister Malcolm Turnbull at his private residence while he attended the ASEAN-Australia Summit held in Sydney in March 2018," Indonesian Ambassador to Australia Y. Kristiarto S. Legowo said in a press statement released on Monday.He made the remarks while addressing a diplomatic reception held by the Indonesian Embassy in Canberra to mark the 73rd anniversary of Indonesia`s independence.Some 400 invitees attended the event, including Vice Trade Minister Mark Coulton, Deputy Chief of Armed Force Major General Justin Ellwood, and Australian Capital Territory (ACT) Minister for Multicultural Affairs Chris Steel.The ambassador stated that Indonesia was also the first country visited by Prime Minister Scott Morrison shortly after his inauguration some time ago.He said Morrison`s visit to Indonesia from Aug 31 to Sept 1 was of significance as the leaders of the two countries have agreed to upgrade bilateral cooperation to comprehensive strategic partnership (CSP).The two nations also have concluded negotiations on Indonesia-Australia Comprehensive Economic Partnership Agreement (IA-CEPA), he noted.The ambassador added that the 73rd anniversary of Indonesia`s independence has a special meaning for the Indonesian state and people as the country has increasingly been respected at regional and global levels."Indonesia is currently a member of G-20, which is a group of 20 influential countries in the world, and has also been appointed a non-permanent member of the United Nations Security Council for the 2019-2020 term," he explained.Indonesia has also successfully hosted the 118th Asian Games and will nominate for the host of Olympiad 2032, he remarked.Coulton stated that Indonesia and Australia are neighboring countries which have longstanding historical proximity.He added that the status of Indonesia-Australia relations, which has been upgraded to comprehensive strategic partnership, is very important and special."Australia also praised Indonesia for its crucial role in ASEAN, because it highly influences the regional stability, security and prosperity," he pointed out.Reporting by Ahmad WijayaEditing by Suharto
Posted by AWPA Sydney News at 12:46 AM