2) Demonstrations are scheduled to take place starting September 24th in West Papua while the UNGA is in session.
-------------------------------
https://www.ulmwp.org/west-papuans-in-more-danger-from-indonesian-security-forces-ahead-of-un-general-assembly
1) West Papuans in more danger from Indonesian Security Forces, ahead of UN General Assembly
A message from the desk of Benny Wenda
Ahead of next week’s 73rd session of the United Nations General Assembly (UNGA) Indonesian security forces have been executing a violent campaign to crackdown on freedom of expression in West Papua. Over the last week security forces have been systematically targeting, arresting, torturing, shooting and killing West Papuan people accused of supporting self-determination; activity which remains a crime under Indonesian law.
On September 10th a joint operation between military and police began in the Tiom district. Reports by local West Papuans claim that five civilians, including a child, were persecuted by authorities. Local citizens also report that four villages were raided and their livestock was shot. It is believed that as a result of the raids at least forty people have fled from their villages and not have returned since escaping into the jungle.
On September 15th in the city of Timika the local offices of the West Papua National Committee (KNPB) and People’s Local Parliament (PRD) were raided without warrant by an estimated five hundred Indonesian security forces personnel. According to eyewitness reports, at least seven people were arrested, and one person was shot. During the raid offices were destroyed and property was confiscated. Footage from the incident also shows the Indonesian military shooting directly into KNPB and PRD regional headquarters.
As Chairman of the United Liberation Movement for West Papua (ULMWP) I regrettably must alert the world to the urgent human rights situation in West Papua. The mortal danger of Papuans increases each day that West Papua remains under Indonesia’s violent and oppressive control. These horrific accounts of what West Papuan people are currently experiencing are further evidence of the continuing campaign of violence. In one month at least ninety three West Papuans have been arrested for their involvement in peaceful protests.
Among the recent reports is the most disturbing account of the death of a KNPB activist known as Daud. During the the September 15th raid of KNPB headquarters in Timika, Duad escaped and reportedly went missing for three days. On the 18th of September Duad’s mutilated body was found in the Tipuka village. Upon the recovery of Duad’s body family accounts say they observed obvious signs of torture as his hands and feet were cut off. I send my deepest condolences to Duad’s family and the entire KNPB community. We will continue to stand with you and expose the truth.
Since West Papua was illegally occupied by Indonesia in the 1960s, over 500,000 indigenous Melanesian people have died in this slow Genocide. In addition to those who have been murdered and disappeared, countless more continue to be raped, tortured and abused to this day. As evidenced this week, the West Papuan people continue to be traumatised by Indonesia’s violence. Under Indonesian occupation, there is never justice for these arbitrary arrests and killings. While mass murder and torture in West Papua has been well documented for over 56 years these crimes are not investigated and the perpetrators are never brought to justice. In the name of our brother Duad, and every West Papuan who has senselessly lost their lives at the hands of Indonesian security forces, we must continue our fight to seek international intervention.
Despite the ongoing attempts by the Indonesian government to stop freedom of expression and peaceful assembly, from 24th to 28th of September, there will be numerous demonstrations in West Papua and across the globe. In the face of danger, the people of West Papua will again be risking their lives to show the world they demand urgent international support to ensure our safety and freedom.
On behalf of the people of West Papua, the ULMWP appeals to the international community to please be aware of the urgent situation in West Papua during this dangerous time of public expression. We need your help to shine a light on West Papua amid the darkness of Indonesia’s media blackout. Due to the restriction of journalists we must rely on public support to illuminate these unjust crimes against humanity. Please continue to send your photos of solidarity and share the truth about what is happening in West Papua.
During the United Nations General Assembly (UNGA) we call upon all UN member nations to support the West Papuan people and our fundamental right to self-determination. We send our deepest thanks and appreciation to all supportive UN member nations for their ongoing commitment to our mission.
The ULMWP also appeals to the Indonesian government to immediately stop persecuting the people of West Papua. West Papuans must be allowed to freely and peacefully express our views and advocate for our freedom; rights afforded to us under the Universal Declaration of Human Rights.
On behalf of the people of West Papua, the ULMWP demands that our fundamental right to self-determination must be fulfilled through an internationally supervised vote on independence; in accordance with UN General Assembly Resolutions 1514 and 1541 (XV).
Please keep the people of West Papua in your hearts and prayers.
Benny WendaChairman of the United Liberation Movement for West Papua (ULMWP)
September 21, 2018
——————————————————————
2) Demonstrations are scheduled to take place starting September 24th in West Papua while the UNGA is in session. Military operations are expected in reaction to these protests. 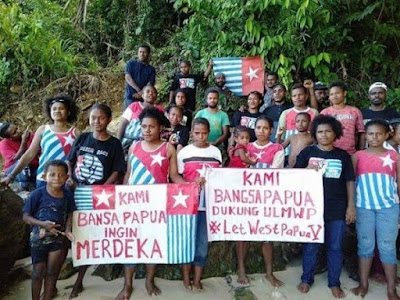