3) KPK forms regional advocacy committee in Papua
-------------------------
https://www.radionz.co.nz/international/pacific-news/365836/indonesia-proposes-funding-papua-diplomacy-in-pacific
1) Indonesia proposes funding Papua diplomacy in Pacific
2:53 pm today
Indonesia's government is proposing $US4 million in funding towards influencing Pacific Island countries to change their position on Papua.
The Kompas newspaper reports the country's top security minister, Wiranto, who like many Indonesians goes by only one name, saying the money would be used to finance soft diplomacy efforts in the South Pacific.
He said a lot of countries in the region get misinformation about Indonesia's attitude towards Papua and that actually Jakarta was promoting development there.
The proposed budget would be used to improve the image of Papua and increase Indonesian engagement in the Pacific, including border security and security intelligence cooperation.
Wiranto said Indonesia had invited Nauru President Baron Waqa and Vanuatu Prime Minister Charlot Salwai to see the positive work in Papua for themselves.
Nauru and Vanuatu have called for investigations into alleged human rights abuses in West Papua at the United Nations but have softened their tone in recent months.
Mr Waqa met with Wiranto in Nauru in February and voiced support for Indonesia's development of Papua.
And an April visit by a Solomon Islands delegation to Papua caused an upset among staunch advocates in the traditionally pro-Papuan independence country.
In his comments this week, Wiranto said countries promoting Papuan independence at the United Nations had to be dealt with.
————————————————————
https://www.forumsec.org/forty-ninth-pacific-islands-forum-nauru-3rd-6th-september-2018/ 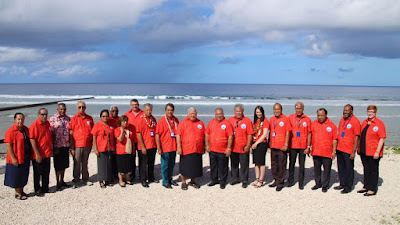 Click here to read the Unofficial 49 PIFLM Communique – for unofficial release.
It will be replaced by the official text version shortly.
https://www.forumsec.org/wp-content/uploads/2018/09/FINAL-49PIFLM-Communique-for-unofficial-release_rev.pdf
-------------------------------------
https://en.antaranews.com/news/118256/kpk-forms-regional-advocacy-committee-in-papua
3) KPK forms regional advocacy committee in Papua
Reporter: Antara  2 hours ago
Jayapura, Papua (ANTARA News) - The Corruption Eradication Commission (KPK) has formed a Regional Advocacy Committee in Papua Province as a forum for communication and advocacy between regulators and businesses.KPK Commissioner Basaria Panjaitan noted in Jayapura on Thursday that the establishment of this forum aimed to accelerate the prevention of corruption, especially in the business sector."In this forum, both parties can deliver and resolve together the obstacles faced in creating a business environment with integrity," he remarked.According to Panjaitan, the KPK had attempted to get the regional government and private entrepreneurs to sit together to find solutions to the four main problems in Papua, identified from the results of the "Focus Group Discussion" conducted with the association of the Kadin Papua umbrella, academics, and "Non-Government Organizations.""The first problem concerns the procurement of goods and services related to not including the value of expertise in the RAB of the construction procurement project and indications of price negotiations for the Papua Procurement of Goods and Services project being conducted outside the prevailing mechanisms and rules," he noted.He explained that the two, related to the weak application of the law for alleged corruption, were carried out by corporation, while thirdly, there is an indication of registration of land rights that are not in accordance with the procedures applied by unscrupulous business actors and BPN."The fourth is the absence of a cost reference standard in the process of procuring a work package for oil and gas exploration business activities, where we hope this committee can be a concrete form of collaborative action that results in a solution," he emphasized.He added that the establishment of the Anti-Corruption Regional Advocacy Committee initiated by the KPK was not only formed at the regional level but also nationally.*** 2 ***Reporting by Hendrina Dian KandipiEditing by Eliswan
Posted by AWPA Sydney News at 2:52 AM