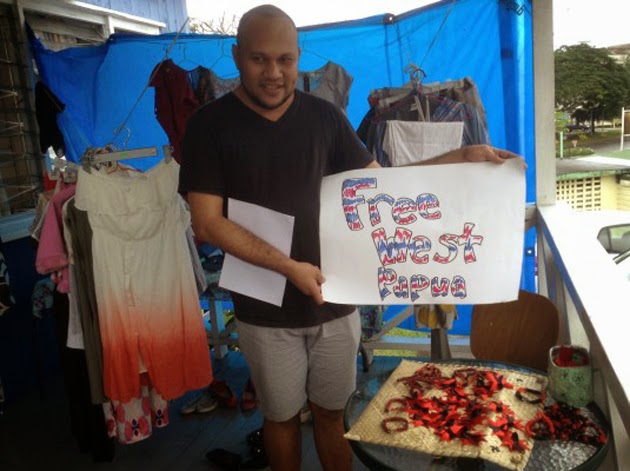 Suva, 21/6 (Jubi) – Young people in the Pacific region has just launched a campaign of red-black in Suva, Fiji on Friday (20/6) as a form of solidarity against bloody movement in West Papua.
On Friday afternoon, city taxis took a group of journalists and stopped across the street between blue and green building. Green building is the office of Conference Pacific Churches (PCC).Meanwhile,blue building is the Pacific Network on Globalization office (PANG). In front of PANG office, there were sales written ‘Bula Garage Sale, Sausage Siggle $ 3, carage Sale. On the terrace, there were a number of clothing and accessories. Garage Sale Bula was written on white paper Red Blue colored.
The action drew attention from the visitors. Some men and women dressed in black explained their action to them.
“Let’s take a look. Who knows there is something important to us,” journalist said.
When we got into the action in place, the men ended the explanation for previous visitors. He welcomed the arrival of us and introduced himself.
“I’m Joey” said Joey Tau “Today youth members of conferences churches in Pacific (PCC), Pacific Network on Globalisation (PANG) and a number of students from University of the South Pacific (USP) launched the Black or Red we call the “We Bleed Black and Red Campaign,” he said.
The meaning of the red on black is to symbolize Morning Star and Black symbolizes human life West Papua is covered in blood, we invite all people using This symbol as we support the continued blood spilled as a result of cruelty ruling, “said Joey explained rubber band and red ribbon their black wicker.
According to Joey, the campaign will be a weekly campaign in Fiji and then move to other Pacific countries.
“We will do campaign every Wednesday, from place to other place, “he said.
To those who participated in this campaign, will get pictures and stories about the support of West Papua.
It was also filled with dark red ribbon weaving action, collect clothes, books and novels, shoes and jewelery ex which is then sold at varying prices.
Black and red ribbon bracelets sold at a Dollar Fiji or equivalent of 6 thousand rupiah, and the novel sold for 1-5 dollars Fiji dollars or 6000-30000 rupiah.
According to Joey, the money will be collecting funds for youth Papua somewhere and talk about their struggles. Joey reluctantly say where the meeting would take place.
“I can not tell our secrets,” he said seriously.
PCC General Secretary, Rev. Francois Pihaatae justified it.
Therefore, according to the man’s native Tahiti, it is called for West Papuan independet.
“We write to liberate West Papua ago place against a wall in the office. (Jubi / Mawel/ Tina)

He said, there is call for a boycott is delivered via SMS and others are delivered through a flyer that reads the pro-referendum.

In addition, he said, there is also the threat of the West Papua National Liberation Army (TPN-PB) / They Papua Movement. He said, they threatened a postal disruption to the military and police in the border area.

Sorong has been designated as a regional hub in the eastern part of the country, linking the regency with other parts of the archipelago, including Bitung, Jakarta, Merauke, Jayapura and Surabaya, as well as neighboring countries, such as Papua New Guinea and Australia.

Once the port starts operating, it is expected to cut logistics costs in the region by 50 percent.

IPC corporate secretary Rima Novianti said on Tuesday that the company had acquired less than 40 percent of the land needed for the port construction and that the company would be unable to begin the project this year as planned.

“We actually wanted to begin construction this year, but we are still waiting for final approval, mainly because we are in the process of acquiring protected forests and land belonging to indigenous people,” she told reporters on the sidelines of a discussion.

Rima said that the company was currently waiting for approval from the Forestry Ministry, as well as for the issuance of environmental impact analysis (Amdal) permits to begin constructing the port.

The port, which would have the capacity to receive 500,000 containers of 20-foot equivalent units (TEUs), requires around 7,500 hectares of land with the possibility for future expansion.

Freight costs from Tanjung Priok Port in North Jakarta to Sorong Port could be reduced from US$2,000 per TEU to $375 per TEU when Sorong is completed, according to IPC.

Pelindo II initially hoped to commence operations by the end of 2014 to help reduce logistics costs in the eastern part of Indonesia. However, land acquisition issues and environmental concerns have forced the company to push back the target to early next year.

“We want to break ground by early next year, but it all depends on the administration process,” Rima said. “That is why our focus now lies solely on the construction of the Kalibaru port this year,” she added.

In April, the IPC signed an agreement to jointly operate the first container terminal at Kalibaru Port, known as the New Tanjung Priok, which would be the country’s largest industrial port.

Operations at the Kalibaru Port are expected to begin in the middle of 2015, while construction of the first contained terminal will be divided into two stages.

4) SODELPA FIJI WILL DECLARE ITS SUPORT TO FREE WEST PAPUA

Suva, 23/6(Jubi)- Social Democratic Liberal Party (SOLDEPA) Fiji declared the liberation of West Papua would be part of the important agenda of its political manifest which will be released next month.
The Party Leader Ro Teimumu Kepa said the struggle of West Papuan people for independence is not forgotten. Melanesian people in Fiji are standing beside their struggle. “You are not alone. Our supports are growing for your problem. We are with you,” said Kepa on Sunday (22/6) in Suva, Fiji.
The statement said after the visit of the President of Indonesia to Fiji to speak in the 2nd Pacific Islands Development Forum in Nandi, Fiji on last Sunday (19/6). According to him, the President Yudhoyono did not raise the issue of West Papua in the forum, while the national media reported the purpose of his mission to Pacific for explaining some issues and a lot of misinformation related to West Papua.
“In the forum, the president reported not raise the issue of West Papua openly, although the national media cited his intention describing the problem of West Papua,” said Kepa. Therefor he thought the presence of the president of Indonesia in the forum was just a political diplomacy for keeping Papua as part of Indonesia.
“The goal is to grasp as much as possible the Pacific leaders to concern towards the Indonesian Policy to West Papua and to fight the increasingly international and regional pressures in supporting West Papua,” said Kepa.
For that reason, the Fiji Intelligent provided the high protection a week before the president’s arrival to anticipate the people’s movement to support West Papua in front of the President Yudhoyono.  Even the intelligent paid attention to the presence of the Fiji senior journalist, Netani Rika in the forum. The police banned him to the forum. “He is too vocal,” a secret agent sad to the Fiji Times by phone a day before the forum. (Jubi/PCC/ Fiji Times.Com/rom)

tabloidjubi.com Jun 24th, 2014 0 Comment
However, not all objects are carved, only historical objects are. These carvings then were displayed at the cultural exhibition of Sentani Lake Festival in Sentani, Jayapura, this month.
“The carving depicts a figure of Ondoafi ( Tribal leader) who becomes crocodile’s master. He could call the crocodile, sit on the back of the crocodile, to cross the lake, or fish,” said Timothy Wally, when explaining the replica of a crocodile-shaped carving, which is on top of the crocodile’s back.
In the past, before people knew how to make a boat, an Ondoafi with his magical powers could call the crocodile to be the means of transportation. However, it does not apply to all the clans, only to a particular clan.
There is also a replica of cassowary which ridden by a man from particular clan. With the help of cassowary, a master could  roam the land area to the most distant point.
“Cassowary master is different from the master crocodile. So someone who could call a crocodile, could not call cassowary. This time, in real life, the community still believe in it, ” Wally added.
The same thing is also described by Bertho Wally, one of the community leaders of Baborongko village.
“There are many Wally’s clans ,but only tribal leader (ondoafi) lineage could do,” he explained.
There are Wally ‘s clans that could not call a crocodile or a cassowary, but he has magical powers to make rain and fire.
“So, if today, he told me it is raining, it will rain. Likewise, he asked for a fire burned down the house, the fire will burn the house and follow his orders, ” he said.
Well, the stories which then impregnated into wood carver in the village Baborongko and poured in the form of engraving on wood, or forming a log into something meaningful. (Jubi / Albert/ Tina)
-----------------------------------------------------------------------------------------
http://www.thejakartaglobe.com/opinion/clarification-freeports-spending-papua/
In reference to the June 15 opinion piece written by Johannes Nugroho that was published by the Jakarta Globe, we would like to clarify some points and provide a context to certain information provided in the article.
The article mentions: “But to be fair, Freeport also sustains 30,000 odd jobs for Indonesians, is the country’s single biggest taxpayer and spent $39.4 million in 2012 on community development projects for the benefit of the local Papuans. Indeed the company has long pledged 1 percent of its profits on community development in the province.” It also says that: “As a company Freeport Indonesia currently pays 25 percent on its income, admittedly a higher rate than most companies pay in the country.”
We would like to clarify to the information provided in the article:
1. PT Freeport Indonesia (PTFI) allocates two (2) types of funding for community development, which are Partnership Fund (Dana Kemitraan) and Operational Fund (Dana Operasional). The Partnership Fund PTFI allocates yearly is 1 percent of gross revenue (not from profit). The Partnership Fund is managed by Lembaga Pengembangan Masyarakat Amungme & Kamoro (LPMAK) and the Operational Fund is managed by PTFI’s Community Affairs Division.
2. In 2013 PTFI spent $41.2 million for Partnership Fund (Dana Kemitraan) and $96.9 million for community development in 2013 (Operational Fund). In total, PTFI spent over $138 million on community development programs in 2013.
3. In accordance to the Contract of Work (CoW), PTFI is currently paying 35 percent of corporate tax, or Pajak Badan (not 25 percent).
Daisy Primayanti is vice president of corporate communications at Freeport Indonesia.