1) RUBEN MAGAY: PAPUANS WANT INDEPENDENCE BECAUSE THEY ARE TREATED UNFAIRLY

1) RUBEN MAGAY: PAPUANS WANT INDEPENDENCE BECAUSE THEY ARE TREATED UNFAIRLY
2) GERINDRA TO BE ASKED TO NOT BRING UP MURDER OF THEYS ELUAY IN PRESIDENTIAL ELECTION
3) SOLDIER SHOT AFTER BORDER GATE OPEN
4) TRWP State Responsible for Shooting Members of the TNI in Indonesia - PNG Border

1) RUBEN MAGAY: PAPUANS WANT INDEPENDENCE BECAUSE THEY ARE TREATED UNFAIRLY

Jayapura, 3/6 (Jubi) – Papuan councillor Ruben Magay said the people of Papua wanted separation from Indonesia because they feel being unfairly treated.
“Most of Papuans feel unrespect and do not satisfied with the current administration. They feel discriminated,” Magay, chairman of Commission A at Papua’s Legislative Council, told tabloidjubi.com on Tuesday (3/6).
As long as the central government does not respect Papuans and their rights, the people will continue to seek independence, he said.
“In addition, there’s a memory of the past that still lingers for Papuans until today. Injustices are the main reason,” he said.
He said Jakarta has tried to solve problems in Papua without seeing the reality.
“It has been a mistake. The government should be able to create prosperity, provide education and a peaceful atmosphere for the people. But Papuans continued to be deceived,” he said.
Meanwhile, the Papua Free Movement (OPM) still exists in Papua. One of the leaders is Goliath Tabuni. On one occasion, the Secretary General of OPM, Anton Tabuni said to a local media outlet they had no interest in any proposal from Jakarta.
“We reject them all. General Goliath Tabuni will never be stopped. We have a clear purpose,” Tabuni said.
On the other side, military commander Major General Christian Zebua said in early May  that army has seize 28 weapons belonging to OPM.  (Jubi/Arjuna)
----------------------------------------------------------------------------------------------

Sentani, 3/6 (Jubi) – Yanto Eluay, the second son of Theys Hiyo Eluay reacted on the statement of the Chairwoman of the Regional Council of Gerindra Papua, Yanni that previously said will bring up Theys Hiyo Eluay’s death if people question a connection between presidential candidate Prabowo and Mapenduma case.
“Do not bring up such issue for the presidential election in Papua. Everyone knows who committed human rights violations in Papua, including the case of my father. The Kopassus (Special Force) did it,” he told to tabloidjubi.com by phone on Tuesday (3/6).
He further said, the other candidate is not related to his father’s death. “So, I expect Gerindra Papua to not divert the issue for seeking the popularity.  Better they talk about their programs,” he said.
He admitted if Yanni’s statement has a connection with the former President Megawati who is currently the General Chairwoman of PDP-P Party. But he asked his father’s case should not be a reason for taking down the candidate. He expected the campaign team of both sides do not turn the human right violations in Papua as the scapegoat for self-promotion and popularity, because the people of Papua need to hear the completion of the   a scapegoat in Papua for self-promotion and popularity, because the people of Papua issues either with any pattern, military approach or dialogue or anything else.
He said what was happened in Papua has been done systematically and the perpetrator is the state’s institution. So what about the families of the victims?
“Anyone who elected should be responsible on behalf of the State, when the families of the victims took the case to both national or international human rights court. Because I am on behalf of my family would charge on the murder of my father,” he said.
One day earlier, the Chairwoman of the Regional Council of Gerindra Party Papua, Yanni responded to statement on the Mapenduma case. She said those people didn’t know anything about what was exactly happened. It was not like it described.
“Many witnesses will testify. If it’s a black campaign, we can fight back this issue by bringing up the case of the murder of Papuan leader, Theys Hiyo Eluay in 2001. I thought the people of Papua are smart and not easily being fooled,” Yanni said.(Jubi/Albert/rom)
--------------------------------------------------------------------
http://tabloidjubi.com/en/?p=2579

Jayapura, 3/6 (Jubi) – A soldier was shot in his right hip during a firefight  on the Indonesian-PNG border on Tuesday (3/6).
The soldier, Second Private Maulana Malik,  was evacuated to the Muaratami Community Health Center to stop his bleeding, and he then  transferred to the Marthen Indey Army Hospital for further treatment.
Earlier, a gunfire was heard in the neutral zone at around 13.00 Papua time; an hour after the border gate was opened. Soldiers and police officers who briefed by the Head of Military Resort Lieutenant Colonel Rano Tilaar ran out to check.
Muaratami Police Chief, Commissionaire Police Yulius Yawan confirmed the incident. “Yes, there’s a a gunfire,” he said through the SMS on Tuesday (3/6).
A soldier who declined to give his name said the fire was shot after the gate was opened for an hour. “The gate was just opened. We were in briefing at the Post-01 Skouw when heard the gunfire coming from the border near the post,” he said.
Papua Police Spokesperson, the Commissioner Seniour Police Sulistyo Pudjo Hartono accused rebels for the shooting. “This group wants to demonstrate their existence. They disturbed the economy in the border,” he said. He further said the Papua Police is keeping the coordination with the PNG Police. “The Indonesian Military is also do the same thing,” he said.
After the shooting incident, the border gate is closed for uncertain time, while the soldiers and the police officers are still on the scene and there are no activities in the market border until now. (Jubi/Indrayadi TH/rom)
-------------------------------------------------------------------------------------------
A google translate of article in Majalahselangkah.com. Be-aware google translate can be a bit erratic.
Oringial bahasa link at
http://majalahselangkah.com/content/-trwp-nyatakan-bertanggung-jawab-atas-penembakan-anggota-tni-di-perbatasan-ri-png 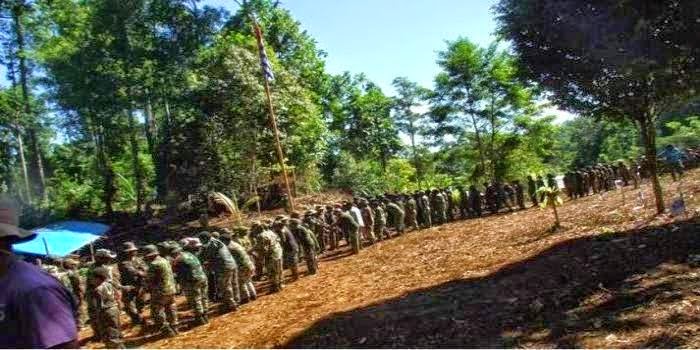 Revolutionary Armed Forces of West Papua during training at headquarters , photographs sent to broadcast with the statement . Photo : trwp

In a written statement received majalahselangkah.com tonight , Wednesday ( 04.06.14 ) , Mathias Wenda admitted the incident carried out by his men and declared fully responsible for the gunfire .

" The shooting that occurred this afternoon ( Tuesday, 06/03/2014 ) at the border is done by my subordinates , my behest . Me fully responsible for the gunfire that occurred , " he wrote in the statement .

TRWP threatened similar action continues to be made ​​in the times to come . " We will continue to launch guerrilla action - akasi to Indonesia out of the sovereign territory of West Papua . And I also remind you again to all the people of Papua , to boycott the presidential election process in the Land of Papua Indonesia , " he wrote .

Upper contact of fire , Mathias Wenda confirmed, it no casualties . " All my men in fine condition , none of our troops who died in battle this afternoon . Reports I get from my boys is that they managed to drop one member of the military , " he said .

Known , Prada Maulana Malik hospitalized ( RS ) Indey Marten , owned by the Army Hospital in Jayapura . News of this event can be read on a previous news : TNI Members Shot in RI - PNG border .

" We regret for the corresponding member reports , the incident on the boundary fence . There is a responsible party , in this case security across government . , But no time at the scene of their duties . Was there that makes some sort of flexibility . Soon as our members provide resistance , they crossed to PNG , " Paul said as quoted tabloidjubi.com Waterpauw .