Jakarta. President Susilo Bambang Yudhoyono’s visit to Fiji this week reflects Indonesia’s desire to assert more power and influence among its neighbors, foreign policy analysts say, and Pacific island states are becoming increasingly responsive to its presence.
Yudhoyono arrived in Nadi on Tuesday, as chief guest of the Pacific Islands Development Forum (PIDF), a grouping of Pacific states and territories — excluding New Zealand and Australia — that focused on climate change and sustainable development.
The three-day visit, which ends on Thursday, has been touted as emblematic of the growing importance of the region by Fiji’s Prime Minister — and PIDF chairman — Frank Bainimarama, who invited Yudhoyono.
Analysts, though, have cited different motivations from Indonesia for its visit, which is the first by a sitting Indonesian president.
The country’s expanding economy and success with democracy, its desire to exert more influence in the region, and an attempt to disrupt Melanesian support for West Papuan independence claims are seen as factors in Indonesia’s increased engagement with Pacific island countries, which has increased sharply in the past 15 years.
Since Suharto stepped down from power in 1998, Indonesia has bolstered relations with Pacific island nations and it now has bilateral relations with all.
In 2001, Indonesia was granted post-forum dialogue status at the Pacific Island Forum and it obtained observer status at the Melanesian Spearhead Group in 2011. Fiji was suspended from the PIF in 2009 — primarily a result of lobbying from Australia and New Zealand — after Bainimarama failed to hold elections following a 2006 military coup. The PIDF was established four years later in an attempt to widen the region’s international ties.
Between 2001 and 2011 Indonesia initiated multilateral partnerships to tackle threats to marine life, such as the Coral Triangle Initiative on Coral Reefs, Fisheries and Food Security (CTI-CFF); and regional security, the Southwest Pacific Dialogue.
Broadening influence
A lot of ground has been covered. But according to Awidya Santikajaya, a PhD candidate at the Asia-Pacific College of Diplomacy at the Australian National University, there was plenty to make up.
“Despite its geographical proximity, relations between Indonesia and Pacific countries were underdeveloped,” he said, referring to Indonesia’s pre-Reformasi era.
Awidya — who is attending ANU under the World Bank-Government of Indonesia Scholarship Program — said that changed under the leadership of Indonesia’s first president in the post-Suharto era, Abdurrahman “Gus Dur” Wahid, who urged closer relations with countries in the Pacific in an effort to widen Indonesia’s foreign policy spectrum beyond its traditional orientation to the Association of Southeast Asian Nations.
There were reasons based on strategy geographically — the Indonesian archipelago straddles the Indian and Pacific Oceans and shares land and maritime borders with Pacific island nations. Indonesia’s broadening influence in the region also reflected its rising global profile and new pragmatic foreign policy, said Awidya, who worked at Indonesia’s Foreign Ministry before taking up his PhD studies in 2012.
“The rise of Indonesia’s democratic governance and economic performance since Reformasi had raised Indonesia’s foreign policy activism, which included building good relationships with all its neighbors,” he said.
However, there have also been security dimensions to the move.
Jenny Hayward-Jones, the director of the Myer Foundation Melanesia Program at Australia’s Lowy Institute for International Policy, said that while Indonesia’s engagement with Pacific island countries could partly be explained by its own growth and success with democracy, it was largely motivated by worries of Melanesian support for West Papua.
“Indonesia is concerned about an increasingly assertive Melanesian Spearhead Group [MSG], which promotes the West Papua cause, and therefore wants to be influencing the members of the MSG,” she said.
West Papuan claims for independence have been repressed by Indonesia since Jakarta annexed the region in 1969. Hayward-Jones said there was significant support among the citizens of Vanuatu, Papua New Guinea and the Solomon Islands for the cause. In March this year, Vanuatu’s former prime minister, Moana Carcasses Kalosil, raised the issue of human rights abuses in West Papua at the United Nations Human Rights Council in Geneva.
Fiji and New Caledonia’s pro-independence Front de Liberation Nationale Kanak et Socialiste (FLNKS) are the two other members of the MSG.
An ‘underlying agenda’
Sandra Tarte, director, politics and international affairs program at the University of the South Pacific in Fiji, said she believed Indonesia had an “underlying agenda” that related to West Papua, too.
“There is strong domestic [and] popular sympathy in Melanesian countries —including Fiji — for the West Papua cause, and this does not sit well with the close official links between Indonesia and MSG countries,” she said.
Indonesia obtained observer status at the MSG in 2011. Meanwhile, the push to join the group by the West Papua National Coalition for Liberation faltered, as reported by New Zealand Radio in 2008; and in January this year Fiji, Papua New Guinea and the Solomon Islands agreed not to interfere in Indonesia’s “internal affairs,” according to The Guardian.
The pledge of non-interference was a diplomatic coup for Indonesia, but it also signaled how responsive Melanesian countries were becoming to Indonesia.
Pacific island countries have reassessed their traditional ties with Australia and New Zealand over the past decade and are seeking new ways to pursue development. Hayward-Jones went as far as to say Fiji and PNG were courting Indonesia.
“Fiji, as part of its quest to build relationships with emerging powers since its isolation from its traditional partners after the 2006 coup — both to prove it didn’t need Australia and New Zealand and to diversify investment partners,” she said. “PNG, because it has a fast-growing economy and wants to enhance relationships with Asian partners — to increase trade and investment.”
Awidya said that although Indonesia’s priorities were with Asean and the East Asia region, it offered partnership in international forums, investment opportunities, and it shared some mutual development and environmental challenges.
“Indonesia, as an emerging power, wants to assert more power and influence to its neighbors, including in the Pacific,” he said. “At the same time, Pacific countries are seeing Indonesia’s growing role as beneficial for leveraging their status on the world stage as well as prospering them.”

Jayapura, 17/6 – Jayapura police chief Alfred Papare held a coordination meeting in order to identify threats that may occur during the presidential election in July.
“There is an effort to boycott the election by political organizations and Armed Criminal Civil organizations ( KSB),” Papare said at Jayapura municipality office on Monday (16/6).
Attempts to disrupt the election include writing the word “referendum” at the back of ballots, writing provocative statements for a boycott call and disseminating short messages not to elect a president as the people of Papua already have had a president.
“Ironically, there is an effort to purchase weapons in the neighboring country for the group KSB in order to foil the presidential election,” he added.
Jayapura military command chief of staff Hendrik Mote said: ” The Military is ready to help the police in securing presidential election,” he said. (Jubi / Sindung/ Tina)
--------------------------------------------------------------------------------
A google translate of posting on KNPB webpage. Be-aware google translate can be a bit erratic.
Original bahasa link at
http://knpbnews.com/?p=4245
3) Terror Secretariat and the PRD Region KNPB Merauke by the Indonesian Military
June 18, 2014 By: haanim Category: KNPB Region, News
Samson Apay
Merauke, KNPBNews - Today, Wednesday (06/18/14), at around 08:00 to 11:00 WPB, military and police / Brimob checks around the front and rear yard KNPB Secretariat Building and the PRD Regional Office Merauke, as well as perform cordon. People who want to come to the Secretariat to check the information be intercepted and sent home even KNPB Security Chairman and members of KNPB also intercepted and sent home.
Sala KNPB one member on behalf of a victim when Samson Apay be intercepted and detained. Victims experience fear so shocked and fainted into unconsciousness. The victim was taken to the police station and interrogated Merauke approximately half an hour, then released.

Based konfirmasih to the Chairman of the PRD and KNPB, Adj Intel Merauke Police, AKP. Alfons Umbora said that they did this act on the orders of superiors because there is information that the Secretariat of the National Committee of West Papua (KNPB) and the Regional Office of the People's Parliament (PRD) Region Merauke no socialization boycott the presidential election of 2014.
In fact, on Wednesday, June 18, 2014, and the PRD Region KNPB Merauke did not perform activities of any kind in this place.
Photos also at
http://knpbnews.com/?p=4245

4) FOUR AMBASSADORS CONFIRM TO PARTICIPATE IN THE SENTANI LAKE FESTIVAL 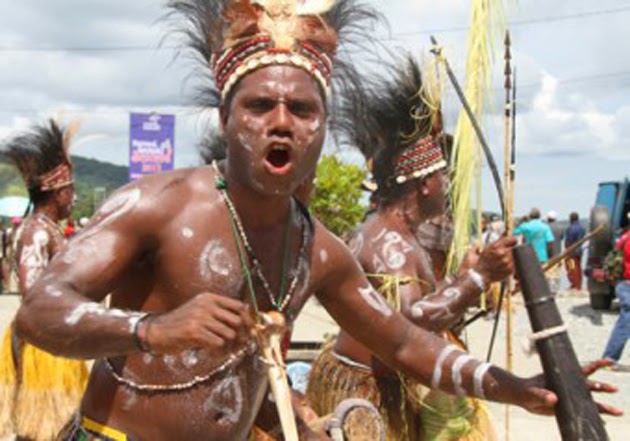 Opening ceremony of Sentani Lake Festival, 2013 (Jubi)
Jayapura, 17/6 (Jubi) – The ambassador of friend countries expressed their readiness to attend the 8th Sentani Lake Festival (FDS) that would be held on 19 June.
The Ambassadors of India, Lebanon, Croatia and Palestine have confirmed their participation in the annual event, the Papua Police Chief, the Inspector General Police Tito Karnavian.
“We will provide the special guard for them. Papua Police will also participate in the FDS including canoeing along the lakeside during the event, especially in the opening ceremony,” said the Chief on Tuesday (17/6).
He further said since the festival is part of the public and national agenda, it would definitely take attention of many visitors both from inside and outside Papua. Therefore the Papua Police must provide the safeguards.
“We are preparing 537 personnel consisting of the Local Police with the support from the Papua Police and Military, but their number might be increased to 600 personnel in the opening ceremony. But it would be reduced during the activities and increased in the closing ceremony,” he said.
Beside the security around the festival’s location, the Papua Police would also assign its officers to guard at the airport and the hotel where the participants stay. The officers will dress the modified uniform to respect the local wisdom. “It’s the traditional party and we will participate as well as to guard the party,” said the Chief.
The Sentani Lake Festival is planning to be part of the Raja Ampat Sail Festival but the last event is postponed till 22 August due to the readiness of venue. So the FDS is becoming a single event but still included in the national agenda and expected the number of participants. (Jubi/Arjuna/rom)