tabloidjubi.com Jun 9th, 2014 0 Comment
Jakarta, 8/6 (Jubi) – Freeport has agreed to renegotiate six point of Contract of Work, including divesting 30%  of its shares, a Freeport official said.
A meeting between the government, the director of Freeport Indonesia Rozik B Soetijipto and the CEO of Freeport McMoran Copper & Gold Inc Richard Adkerson on 3 June resulted in the agreement to divest 30% of the company’s shares.
The deal was surprising since earlier the company had only been willing to sell 20 percent of its shares.
A spokeswoman for Freeport Indonesia, Daisy Primayanti, confirmed the meeting.
“Divestment is part of the strategic points discussed in the contract renegotiation with the government,” Daisy told to tabloidjubi.com by phone on Saturday (7/6).
She further said discussions between both parties went very well and achieved a lot of progress.
But she declined explain further about the mechanism of divestment whether the Provincial Government of Papua would be part of the shareholders. “I apologize for I cannot explain the mechanism in detail. But it will be announced once it’s fixed,” she said.
The Director of Mineral and Mining Resources Ministry, Sukhyar said after the meeting that Freeport should divest it shares after signing of the new contract, or after year 2021.
“This is referred to the contract revision. First phase is to divest 20% shares in the first year,” he said.
He further added after taken several phases, Freeport must fulfill its obligation to release 30% of it shares. According to him, the divestment mechanism would be conducted in several stages. At first, it should be offer in respectfully to the Central Government, Provincial Government, and State’s Company to Regional Company. Meanwhile the reference of shares’ selling price will be count based on the replacement cost or fair value cost to replace the investment made by PT Freeport.
Meeting to renegotiate the Contract of Work between the Government of Indonesia and Freeport Indonesia resulted the following points:
1. The mining areas will reduce from 212,950 hectares to 125,000 hectares.
2. Freeport with Newmont agreed to build a smelter.
3. Freeport agreed to divest 30% of it shares.
4. The Contract of Work will be extended until 2041.
5. The fulfillment of local contains remains at 100%.
6. 1 % royalty will increase to 3,75%.
(Jubi/Victor Mambor/Rom)
---------------------------------------------------------------------
http://tabloidjubi.com/en/?p=2603

IT TAKES WEEK TO REACH TOWN IN TABONJI 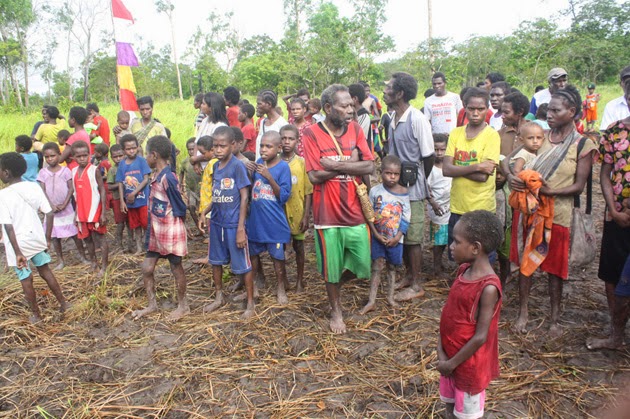 Merauke, 6/6 (Jubi) – One of the nine villages in Tabonji district, Kampung Wanggambi, is known as a place that is very difficult to reach.
The only public transportation used by the population of 50 families is traditional row boat with a purpose to a neighboring village and district. District Chief of Tabonji, Wilhelmus Harbelubun, said people from Kampung Wanggambi have to row a boat for a week to go to town.
“It’s been three years I have served  the district, but I still have not time to go up to the Wamnggambi since there is no speed boat. A speed boat just arrived and I will visit people in the near future,” he told tabloidjubi.com on Friday (6/6).
Wanggambi’s people rarely come to the capital district. If they come, it is just for a messenger with the aim of taking fees and others. The conditions of the region has been directly reported to the regent of Merauke, Romanus Mbaraka.
“I have to visit the village and hold dialogue with the people ,” he said. (Jubi / Frans L Kobun/ Tina)
------------------------------------------------------
A google translate of posting on KNPB web page. Be-aware google translate can be a bit erratic.
Original bahasa link at
http://knpbnews.com/?p=4187
3) People corpses dumped in Damal Entrances Office PRD / KNPB Timika
June 09, 2014 By: knpbtimika Category: KNPB Region, News

The murder occurred again last night 02:00 Hours (time Timika) of Papua native Amungme killed by people not know (OTK) and this afternoon at 02.00 (time Timika) Papua native of the tribe Damal also killed. Elsewhere murder and dispose of his body in front of Parliament Street in the Regional Office of Mimika (PRDM) and the West Papua National Committee (KNPB) Mimika region.
According to the chairman of the Timika Region KNPB, Steven Itlay that: "This scenario of course we can follow who's behind all these Actors and the situation created by the other party for pitting between the Papuans Papuans in Timika and this is a song old created by the State in the interest of Politics and Economics in Papua and in particular in Timika. "he said.

Monitoring KNPBNews afternoon that KNPB activists and PRD Regional Office Mimika incoming KNPB / PRD did not respond to the scenario that was built by the Homeland Intelligence and they keep doing the activities office as usual.

4) Fresh doubt cast on Prabowo’s  suitability to rule
he Jakarta Post, Jakarta | Election Watch | Mon, June 09 2014, 7:45 AM
A leaked document circulating on the Internet detailing the reasons behind the dismissal of presidential candidate Prabowo Subianto from military service on Aug. 21, 1998, has cast doubts on the former general’s suitability to serve as president, if elected on July 9.The document, which was a scanned copy of the official letter signed by members of the Indonesian Military’s (TNI) Officer’s Honorary Council (DKP) tasked with hearing the cases of Prabowo’s complicity in the kidnapping of pro-democracy activists in 1998, revealed that the former Army’s Special Forces (Kopassus) commander was also fired from his position due to insubordination.Signatories in the document include then Lt. Gen. Susilo Bambang Yudhoyono, the current President; then Army chief of staff Gen. Soebagyo Hadi Siswoyo; Lt. Gen. Fachrul Razi; and Lt. Gen. Agum Gumelar.If the authenticity of the document is verified, it could deal a blow to Prabowo’s credibility as a military man and presidential candidate.The document states Prabowo, as Kopassus commander, overstepped his authority by ordering the Mawar and Melati units to “arrest and detain” the activists of the radical People’s Democratic Party (PRD).Mawar and Melati are military units under the command of Kopassus, which answer to the commander of the TNI.However, the document reveals the Mawar unit did not act on its own initiative, like Prabowo’s campaign team have repeatedly claimed.The document suggests the Mawar unit carried out the kidnappings after Prabowo reassured them that it “had been reported” and that the operation was based on “a direct order from on high”, when in fact a report was never made by Prabowo to then Indonesian Armed Forces (or ABRI, as the TNI was then known) commander Gen. Wiranto.The kidnapping was only reported in April 1998 after pressure from then head of the Armed Forces Intelligence Body (BIA) Maj. Gen. Zacky Anwar Makarim.The document, which was uploaded on the website indonesia-2014.com, is the first document made public that details how Prabowo was dismissed from the military.The document states the DKP not only dismissed Prabowo on charges of human rights violations in relation to the abductions, but also on a number of other actions that demonstrated his insubordination and disregard for the military code.Among the other charges brought against him in the DKP hearing were that Prabowo had carried out or had taken over several operations that were under the authority of the ABRI commander, including the involvement of military forces in East Timor (now Timor Leste) and Aceh; the release of hostages in Wamena in then-Irian Jaya; and Kopassus’ involvement in securing president Soeharto’s visit to Vancouver, Canada in 1997, shortly before the strongman was ousted from power.In conclusion, the DKP said Prabowo had disgraced and disregarded the military system and committed a criminal offense.In response to the circulating document, the leader of the Prabowo-Hatta Rajasa election campaign team, Mahfud MD, reiterated that Prabowo was honorably discharged from the military.“Pak Prabowo did receive his marching orders, but take note that he was discharged with respect,” Mahfud told reporters at Polonia House in East Jakarta.“There is no problem with this document circulating, I want to emphasize it [the dismissal] was done with respect. It would only be a problem if he were dishonorably discharged,” the former Constitutional Court chief justice said. (tjs)
-----------------------------------------------------
Posted by AWPA Sydney News at 3:11 PM