Until now the third member of the Timika Region KNPB still exist in the hands of the police and their whereabouts unknown.

Meanwhile, Chairman of the Regional Parliament of Religion Commission Mimika, Rev.. Daniel Bagau, S.TH declare to the Online Media KNPBNews that, "If the three members of this KNPB arrested in connection with the Worship Celebration will be held tomorrow at the office of the PRD and Bomberay in Timika Region KNPB this means, there is the person responsible of the Regional Parliament Mimika (PRDM). "Advanced Scholars Timika also that" If you want to capture mean come during their capture, it also must follow legal procedures. Do not play catch any such antiquity. "Reveal by phone.

Observation yesterday afternoon, June 30, 2014 also was the Rev.. Daniel also submit an appeal through the local print media, namely Radar Timika that "dated July 1, 2014 Event tomorrow (today) that will be held tomorrow activities with the support of prayer." Continued to urge also that "prohibited from carrying sharp tools, do not come up with a hangover and take came the Bible and polite, neat and clean clothes to follow worship. "his call yesterday through local print media.

To be continued existence of three (3) members of Timika Region KNPB please advocacy and direct contact with the police chief of Mimika New phone number: 085 261 922 003

Previously about an hour yesterday afternoon, 3:00 in front of the TNI also come tell you that tomorrow (today July 1) the military from Timika KODIM come clean all the way front office PRD Social and KNPB "sister later our party tomorrow KODIM no cleaning environment here yes, before I came to know the love of brother. "mimic the TNI words by Chairman Commissioner of Arts and Culture KNPB Timika region, Jitmau. So after hearing the PRD leadership and do KNPB Meeting for Worship and they agreed preparations tomorrow (today) will still do worship. 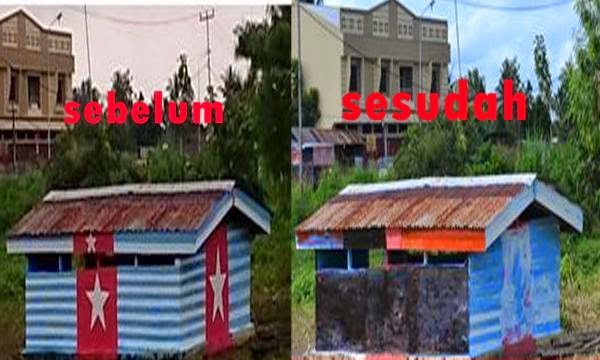 PAPUAN, Timika Timika --- Residents of the District and surrounding areas recently struck by the change of color in the figure mahkam Free Papua Movement (OPM), Kelly Kwalik, which was originally painted in the color of the Morning Star flag be black.

This statement was delivered Diminikus Wakerkwa, one of the civilians in Timika, to suarapapua.com, Monday (06/30/2014), after visiting mahkam Kelly Kwalik and melihanya own.
According Diminikus, while Kelly Kwalik in mahkamkan, the people of West Papua who mourn and grieve his mahkam deliberately painting entirely with the morning star colors, then change color to hitama occurred since Saturday, June 28, 2014.
The tomb is located in the heart of Timika Timika Indah field's future, according Diminkus freshly repainted with base residents of the Morning Star, but after that there are irresponsible people who remove the black paint.
To be sure, Diminikus claimed not to know who the person is doing the painting tomb Kelly Kwalik in black, but allegedly committed by the TNI / police.
"We expect black painting done by the Armed Forces / Police. Of course the goal to disrupt Timika state still recovering from conflict, "he said.
It is said, the TNI / police should not provoke people unwilling to disrupt the town of Timika, because it could have upset the community and perform actions that are not in want.
"I hope the people of Timika to not be provoked by the unreasonable actions. Friends immediately repaint the base color around since the beginning, "he said.
Human rights activists in Jayapura, Elias Ramos deplored unknown person who painted the general mahkam Kelly Kwalik with black people.
"It could easily spark a conflict, we ask the TNI / police must find the mastermind or persons who commit such acts of provocation," said Ramos.
Marselino Tekege

Jakarta (ANTARA News) - President Susilo Bambang Yudhoyono is scheduled to officially open the Sixth Global Forum of United Nations Alliance of Civilizations (UNAOC) at the Bali Nusa Dua Convention Center (BNDCC) which will be held in Bali on August 29 - 30, 2014. "The privilege of hosting such an important event is an acknowledgement of Indonesias effort in promoting harmony among civilization through among others an active role in interfaith and inter-civilization dialogues and inter-media dialogues, even before the AOC was established," the Indonesian foreign affairs ministry said in a media advisory on the UNAOC Global Forum.The Bali Forum will be attended by the UN Secretary General Ban Ki-moon, the UN High Representative of the UNAOC Nassir Abdulaziz Al-Nasser as well as prominent speakers from governments and non-governments alike. The meeting will be preceded by the UNAOC Youth Forum bringing together around 200 youth delegates from all over the world.The AOC was initiated by the then UN Secretary General, Kofi Annan, on 14 July 2005 and co-sponsored by the former Prime Minister of Spain, Jose Luis Rodriguez Zapatero and the Prime Minister of Turkey, Recep Tayyip Erdogan.It is aimed at promoting "Harmony among Civilizations" and to bridge the gap between Islam and the West. Furthermore, AOC endorses the common political will and to mobilize common actions against prejudice, misperception, and to eliminate extremism in societies. In order to achieve the said purposes, the theme of the Global Forum is "Unity in Diversity" focusing on four pillars, namely Education, Youth, Media and Migration. The theme is based on Indonesias national motto of "Bhinneka Tunggal Ika" or "Unity in Diversity". The motto reflects the outlook of Indonesias Founding Fathers which embraces the wealth of Indonesias cultural, ethnic, linguistic and religious diversity. The Sixth UNAOCs Global Forum in Bali will be participated by 114 members of UNAOCs Group of Friends (GoF), including 11 state leaders who have been invited by President Yudhoyono.The 11 state leaders who have been invited are from Spain, Turkey, Brazil, Qatar, Austria, Myanmar, The Peoples Republic of China, India, Timor Leste, Papua New Guinea, and South Africa.The first UNAOCs Global Forum took place in Madrid, Spain, in 2008, and was held through a common consideration in condemning extremist actions, such as bomb attacks in Bali, Madrid, Egypt, Istanbul, and London.(T.F001)

A long time advocate for West Papua believes last week's Melanesian Spearhead Group meeting was positive for the Indonesian region's push for self determination cause.
The MSG has decided that the West Papua National Coalition for Liberation needs to re-apply as a united people, after it lodged an application for membership a year ago.
The group will also have to consult with Jakarta.
The governor of PNG's National Capital District, Powes Parkop, says it is an encouraging step for his people's cause.
"For the people of West Papua it's like when the Americans landed on the moon. Big giant step that of course will not solve everything in one go but hopefully will open the doors to the ultimate desire of our people."
Powes Parkop says he's confident the conditions will be met.
--------------------------------------------------------------
http://www.unpo.org/article/17275